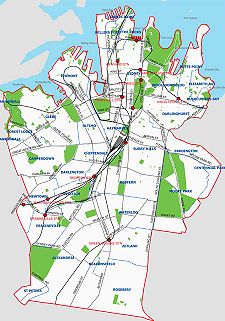 Sydney is the capital of the Australian state of New South Wales.

The term "Sydney" can mean either

The Sydney metropolitan area is the most populous Australian city, with approximately 4.4 million people at the end of June 2008.[1].

Sydney was the first settlement continually inhabited by Europeans, in part because of its large natural harbour. Sydney is a popular tourist destination and is renowned for its quality of life [2] There is mostly friendly rivalry among the capital cities of Australia, with the competition between residents of Sydney and Melbourne being notorious; Melburnians tend to think of themselves and their city as "classier".

The formal term for a resident of Sydney is still given as Sydneyite in many dictionaries, but Sydneysider is the media term and so enjoys widespread usage. The use of Sydneyite seems to be a function of age, education and socio-economic class, with older, better-educated persons using Sydneyite in formal speech and writing.

Clover Moore MP is the Lord Mayor of City and was the first woman elected Lord Mayor (March, 2004).

The climate in Sydney is warm temperate. The overwhelming majority of days are sunny.[3][4] The seasons are reversed from those in the Northern Hemisphere, with summer occurring from December to February.