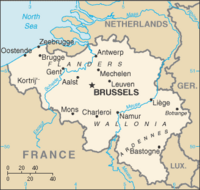 Belgium (Dutch: België, French: Belgique, German: Belgien), officially the Kingdom of Belgium, is a country in Western Europe. On the west it is bordered by the North Sea, on the north by The Netherlands, in the east by Germany, in the southeast by the Grand Duchy of Luxembourg, and in the south by France. On January 1, 2018 the country had 11,358,357 inhabitants.

Historically, Belgium and the Netherlands were known as the Low Countries. From the end of the Middle Ages until the middle of the sixteenth century, the Low Countries, in particular the county of Flanders and later the duchy of Brabant, were a prosperous centre of commerce and culture. From the fourteenth century onward they were governed by the Dukes of Burgundy and later, beginning with Maximilian of Austria by the Habsburg dynasty, including emperor Charles V. From the middle of the sixteenth century until the Belgian revolution of 1830, Belgium changed hands several times. It is an independent state since 1830.

After 1815, Belgium became the southern part of the United Kingdom of the Netherlands.[1] King William I favored the Protestants who dominated Holland, and he became unpopular in the south. The French-speaking Walloons strenuously rejected his attempt to make Dutch the universal language of government. However Flemings spoke a Dutch dialect (Flemish) and welcomed the encouragement of Dutch with a revival of literature and popular culture. Other Flemings, notably the educated bourgeoisie, preferred to speak French. Although Catholics possessed legal equality, after centuries as the state church in the south, they resented their subordination to a government that was fundamentally Protestant in spirit and membership. Few Catholics held high office in state or army. Political liberals in the south complained as well about the king's authoritarian methods. All southerners complained of under-representation in the national legislature. Although the south was industrializing and was more prosperous than the north the accumulated grievances allowed the multiple opposition forces to coalesce. The outbreak of revolution in France in 1830 was a signal for action, at first on behalf of autonomy for Belgium, as the southern provinces were now called, and later on behalf of total independence. William dithered and his half-hearted efforts to reconquer Belgium were thwarted both by the efforts of the Belgians themselves and by the diplomatic opposition of the great powers.

At the London Conference of 1830–31, the chief powers of Europe ordered (in November, 1830) an armistice between the Dutch and the Belgians. The first draft for a treaty of separation of Belgium and the Netherlands was rejected by the Belgians. A second draft (June, 1831) was rejected by William I, who resumed hostilities. Franco-British intervention forced William to withdraw Dutch forces from Belgium late in 1831, and in 1833 an armistice of indefinite duration was concluded. Belgium was effectively independent but William’s attempts to recover Luxembourg and Limburg led to renewed tension. The London Conference of 1838–39 prepared the final Dutch-Belgian separation treaty of 1839 and divided Luxembourg and Limburg between the Dutch and Belgian crowns. The Kingdom of the Netherlands thereafter was made up of only the 11 northern provinces.[2]

Turkish labor was brought in to work the Belgian coal mines during the 1960s and 1970s. Between 1963 and 1971, the Belgian coal industry recruited more than 14,000 Turkish workers, not counting those who arrived independently and who were employed by other sectors in need of the assistance of foreign labor. Despite its high cost, official recruitment of labor in Turkey proved to be effective. Thus, the Belgian authorities decided to promote actively the stabilization of the new immigrant workers, notably by giving increased assistance to reuniting families. The arrival of the first contingents of Turkish workers was, however, marked by a lack of preparedness to receive and look after this new population, and the incidents that flared up during the first year of the Turkish presence in Belgium seemed to indicate that the new policy might fail. The resolution of the difficulties encountered with the Turkish labor was achieved through the combined action of the different parties involved in the recruitment program: the mining companies and the Belgian and Turkish authorities. The organizational structures put in place to create and perpetuate a social order favorable to the authorities concerned had a considerable impact on the future of the Turks in Belgium. Moreover, the Belgian trade-union organizations also became involved and sought to bring the immigrant workers into their structures. The professional and social integration of the Turkish miners and of the first families to arrive was reinforced with the appointment of social delegates from Turkey, while the stabilization of the population and the reunification of families were assisted by an official publication in the Turkish language. The sociocultural and religious structures of support for the population were taken charge of by the Turkish authorities with the intention of preserving intact a strong sense of the workers' Turkish identity and their unwavering loyalty to their homeland. These various partners pursued their cooperation during the 1970s.[3]