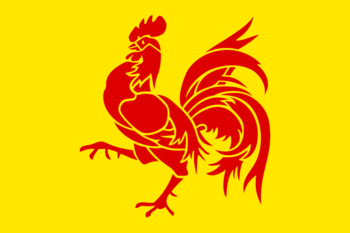 Wallonia (in French Wallonie, in Walloon Walonreye', in German Wallonien, in Dutch Wallonië; officially Walloon Region) is one of the three autonomous Regions of federal Belgium.

It is predominantly French-speaking, French is the official language in the French language region, but there is also a German language region composed of nine municipalities in the east. Like the other regions, Wallonia has its own parliament and government and exercises its functions within the limits defined by the Belgian constitution and special laws.

Wallonia accounts for 55% of the territory of Belgium, and a third of its population.

During the industrial revolution, Wallonia was second only to the United Kingdom in industrialization, capitalizing on its extensive deposits of coal and iron. This brought the region wealth, and, from the beginning of the 19th to the middle of the 20th century, Wallonia was the more prosperous half of Belgium. Since World War II the importance of heavy industry has greatly diminished, and Flanders surpassed Wallonia in wealth as Wallonia declined economically. Wallonia now suffers from high unemployment and has a significantly lower GDP per capita than Flanders. The economic inequalities and linguistic divide between the two are major sources of political conflict in Belgium and is a major factor in Flemish separatism.

The capital of Wallonia is Namur but the city with the greatest population is Charleroi.

Wallonia's backbone is the sillon industriel, which runs from Mons in the west to Verviers in the east, and is home to about two thirds of its population. Major cities lie there.

To the north lies the Central Belgian Plateau, which, like Flanders, is relatively flat and agriculturally fertile. In the south-east lie the Ardennes, hilly and sparsely populated. Wallonia borders Flanders and the Netherlands in the north, France to the south and west, and Germany and Luxembourg to the east. Wallonia has been a member of the Organisation Internationale de la Francophonie since 1980.

It comprises the following provinces :

It is also divided into 20 administrative arrondissements and 262 municipalities.

The largest Walloon municipalities include, as of 2007's population figures: [1]

Wallonia has a Parliament (one chamber with 75 members elected for five years by direct universal suffrage) and a government responsible in front of the parliament. Its parliament exercises two functions:

The government of Wallonia is directed by a political majority. The government numbers nine members with the president. Each member is called a minister.

The composition of the parliament for the 2014-2017 legislature is as follows:

The head of the government, called Minister-President, is Willy Borsus, member of the MR.

The constitutional system of Belgium grants Wallonia its own legislative and executive powers in the fields for which it is competent:

The flag is a coq hardi de gueule sur fond d'or, "a bold red rooster on gold", designed by Pierre Paulus in 1913, and adopted in July 1998.[2] The "national" day is each third Sunday of September. The anthem is Le Chant des Wallons ("the Walloons' song"), written by Theophile Bovy in 1900 and composed by Louis Hillier in 1901.

There is also a logo, a red rooster with the baseline “WALLONIE”.

The variety of French spoken in Wallonia is Belgian French, which differs from the standard French of France to various degrees depending on the speaker. The French language used in the administration and in the media is very similar in Belgium and in France. One notable difference is the use of the words septante (70) and nonante (90) in Belgium, as opposed to soixante-dix and quatre-vingt-dix in France.

In 1990, Belgium also officially recognised Champenois, Gaumais, Picard, and Walloon as regional languages. All are langues d'oïl - closely related, but not identical, to French.

Walloon and Picard dialects were the predominant languages of the Walloon people until the beginning of the 20th century; French was the language of the upper class. With the development of education in French, these dialects have been in continual decline. There is currently an effort to revive Walloon dialects: some schools offer language courses in Walloon, which is also spoken in some radio programmes, but this effort remains very limited.

There are theories about the derivation of the name "Wallonia". It may have come from the Gaulish vellaunos meaning "valorous". Its root vella gave the Cymric wallon as in the famous hero's name Caswallon.

It is also one of many Germanic placenames containing the root Gal or Wal which referred to a speaker of Celtic or Latin.[4] However this is very improbable since Wallonia was home to Celto-Germanic tribes before Julius Caesar's conquest of Gaul, then to other Germanic tribes from across the Rhine, and finally the Franks (Wallonia was part of the Roman province of Germania Inferior). In fact, the Frankish Merovingian Dynasty came from Tournai in Wallonia, and the subsequent Carolingian Dynasty had its roots in the region of Liege, at the other end of Wallonia. French language is thought to have originated in Wallonia (and Northern France), as the Latin of the Frankish court.

The term Walloon' was also used in the late 18th and the 19th century to refer to French-speakers who migrated to the Netherlands, e.g. 'Walloon parishes' in Dutch province of Dutch-Limburg.

To many modern Walloons, Wallonia means "land of the valleys". This could be the real etymology of the word, as the part of Wallonia where Walloon language is traditionally spoken (the provinces of Liege, Namur and Luxembourg) is one of the hilliest region of Europe, and contrasts sharply with the flatness of Flanders. The Walloon Tourism Office supports this etymology, and now indicates "land of the valleys" (pays des vallées) on many touristic road signs.

The Walloon economy experienced a strong development in the 19th century, especially in the regions of Liège and Charleroi, the so-called Sillon industriel. Belgium was then the first country in continental Europe to undergo an industrial revolution in the early 1800s, mainly based on the iron and coal industries, which were both abundant in Wallonia. In 1842 John Cockerill (1790-1840), a British entrepreneur, founded the company Cockerill-Sambre, which would become one of the major producers of steel in Europe. Raoul Warocqué (1870-1917), who made the coal mines of Mariemont a success, was the wealthiest person in Belgium.

The profitability of these types of heavy industries started declining in the first half of the 20th century, which saw the center of industrial activity shift to the northern part of Belgium. Wallonia would be surpassed in economical development by Flanders only in the 1960s, when industrial production in the northern part of Belgium would catch up with Wallonia. The crisis in the steel industry led to a painful economic restructuring in Wallonia. Wallonia switched places with Flanders, regarding economical development. In 2004, the GDP per capita was €27,356 in Flanders, and €19,858 in Wallonia.

The current Walloon economy is relatively diversified, although certain areas — especially around Charleroi and Liège — are still suffering from the steel industry crisis, with a high unemployment rate of up to 30% in some regions, while the south of the region, bordering Luxembourg benefits from its neighbour's economic prosperity, with a lot of Belgians working on the other side of the border (called frontaliers). The restoration of economical development is high on the political agenda.

The Ardennes area south of the Meuse River is a popular tourist destination with a rich cultural heritage, with places such as Bastogne, Dinant, Durbuy, and the famous balneotherapy of Spa.

Wallonia is home to several science and technology organizations.

Walloon films are often characterized by social realism, like those by the Dardenne brothers or Benoît Mariage, and the social documentaries by Patric Jean. At the opposite, the side completely shifted of Thierry Zéno's "Vase de noces" (1974), "Mireille in the life of the others" by Jean-Marie Buchet (1979), "C'est arrivé près de chez vous" (English title: Man bites dog) by Rémy Belvaux and André Bonzel (1992) and of extravagant Noël Godin and Jean-Jacques Rousseau. Wallonia does not shelter any Anthology Film Archive Museum. No theater projects pointed cinema (experimental cinema, underground, or simply different, unusual test in the content or the form.) There is however the network of the theater known as "Art and essai" but, in practice, they diffuse only cinema subsidized "general public".