Coal is a carbon-containing rock formed by the debris from the decay of ferns, vines, trees and other plants which flourished in swamps millions of years ago. Over time, the debris became buried and the actions of bacteria, heat and pressure transformed the debris first into peat (a precursor of coal) and then into the various types of coal as we know them today.[1][2][3] In more technical terminology, that process of transformation is referred to as metamorphosis, coalification or lithification.

Coal is extracted by mining from deposits that exist deep underground as well as deposits that are essentially at or near the surface of the ground. Because of the various degrees of transformation that occurred during the forming of coal deposits in different locations, the composition of coal varies from one deposit to another. No two coals are the same in every respect. In general, coal consists of carbon, hydrogen, oxygen, nitrogen, sulfur and mineral matter (including compounds of silicon, aluminium, iron, calcium, magnesium and others).

There are many compositional differences between the coals mined from the different coal deposits worldwide. The different types of coal are most usually classified by rank which depends upon the degree of transformation from the original source (i.e., decayed plants) and is therefore a measure of a coal's age.[1][4] As the process of progressive transformation took place, the heating value and the fixed carbon content of the coal increased and the amount of volatile matter in the coal decreased. The method of ranking coals used in the United States and Canada was developed by the American Society for Testing and Materials (ASTM) and is based on a number of parameters obtained by various prescribed tests:

The ASTM ranking system is presented in the table below: 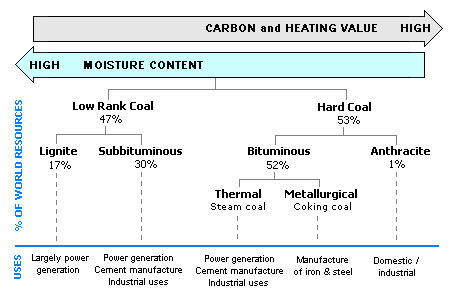 (CC) Image: World Coal Institute
Diagram of the typical uses and the estimated percentage of the world's coal reserves for each coal rank.[6]

There are other coal classification systems developed by the International Organization for Standardization (ISO), the United Kingdom and perhaps others.[4][7]

Both the proximate and the ultimate analysis may be reported on an as received (ar) basis, a dry (d) or moist basis, an ash-free (af) basis, a mineral matter-free (mmf) basis and various combinations of those bases. For example, an analysis may report the basis to be: as received (ar), dry and ash-free (daf), moist and ash-free (maf), dry and mineral matter-free (dmmf) or moist mineral-matter free (moist mmf).

Ash and mineral matter are two distinctly different entities. Mineral matter consists of the various minerals contained in the coal. Ash is the inorganic solids remaining after the coal is completely combusted. The ash is usually less than the mineral matter because of the weight changes that take place during coal combustion such as the loss of gaseous carbon dioxide from mineral carbonates, loss of water from silica minerals and loss of sulfur (as gaseous sulfur dioxide) from iron pyrites.

Some examples of proximate and ultimate analyses are given in the table below:

Economically recoverable coal deposits exist in more than 70 nations and in every major region of the world (Africa, Asia, Australia, Europe, North America and South America). It has been estimated that the worldwide proven reserves of coal amounted to about 848 gigatonnes (Gt) as of 2007.[9] Proven coal reserves are those coal deposits that have been confirmed by exploration, drilling and other means, and which are economically and technically extractable.

It has also been estimated that the worldwide production (i.e., mining) of coal amounted to about 5.54 gigatonnes (Mt) as of 2007.[10] If that rate of production remains constant, the proven reserves will last about 150 years.[9]

The tables below list the distribution of coal reserves and coal production nation-by-nation as of 2007:

Coal as a fuel

Due to its relatively high carbon content and solid, easily-handled form, coal is used for fuel, and has been for hundreds of years (see history of coal mining). As a fuel, coal is the largest source of energy for the generation of electricity worldwide. In 2005, coal fuelled 40% of the world's electricity generating power plants.[11][12]

A major component of the combustion flue gases produced by burning coal as a fuel is carbon dioxide (CO2), which is not a pollutant in the traditional sense since it is essential to support photosynthesis for all plant life on Earth. However, carbon dioxide is a greenhouse gas considered to be a contributor to global warming. It is the most abundant anthropogenic (human caused) greenhouse gas in the Earth's atmosphere. As shown above, coal may contain from about 70 to more than 90 weight percent carbon, which burns almost completely to carbon dioxide. Hence, coal is the fossil fuel with the largest "carbon footprint".

Currently in the United States

The consumption of coal in the United States by sector (as a percentage of the total coal mined in 2007) was 92.7 % for electric power generation, 2.0 % for production of coke, 5.0 % for use in other industries and 0.3 % for residential and commercial heating.[15]

Coal produces over 80% of China's energy; 2.3 billion metric tons of coal were mined in 2007. Despite the health risks posed by severe air pollution in cities (see Beijing) and international pressure to reduce greenhouse emissions, China’s coal consumption is projected to increase in line with its rapid economic growth. Most of the coal is mined in the western provinces of Shaanxi and Shanxi and the northwestern region of Inner Mongolia. However most coal customers are located in the industrialized southeastern and central coastal provinces, so coal must be hauled long distances on China’s vast but overextended rail network. More than 40% of rail capacity is devoted to moving coal, and the country has been investing heavily in new lines and cargo-handling facilities in an attempt to keep up with demand. Despite these efforts, China has suffered persistent power shortages in industrial centers for more than five years as electricity output failed to meet demand from a booming economy. Demand for electricity increased 14% in 2007.

Other uses of coal

Coal can be converted to coke by the process of destructive distillation which removes the volatile matter and alters the physical properties to provide a more uniform and more combustible product with a higher carbon content.[16] The process is often referred to as the coking or carbonization of coal. One of the major uses of coke is in the making of steel where coke is utilized in blast furnaces to reduce iron ore (iron oxide) to molten pig iron, a form of iron with high carbon content. Removal of most of the carbon from the pig iron yields steel that is used for construction of bridges, high-rise buildings, manufacturing of automobiles and major household appliances (refrigerators, cooking stoves and washing machines), and a host of other products. Coke is also used in the production of phosphorus and of calcium carbide.

Coal can be converted, by a process known as coal gasification, into a gas with the same heat of combustion as many natural gases and referred to as synthetic natural gas (SNG).[17][18] Coal gasification can also be used to produce a mixture of carbon monoxide and hydrogen gases referred to as synthesis gas (or syngas) which has a heat of combustion that is much less than that of natural gas. Syngas can be burned as a fuel or it can be converted into automotive fuels like gasoline and diesel oil through the Fischer-Tropsch process.[19]

Coal mining is the process of extracting coal from the ground at the geographical locations where coal deposits exist. Mining of coal is believed to occur in all countries where coal is currently found, and involves many different mining methods depending on the location, width and length of the coal deposits and a number of other factors. Major contemporary methods include deep shaft mining, strip mining, and so-called "mountain top removal". For much more detailed information, see Coal mining.