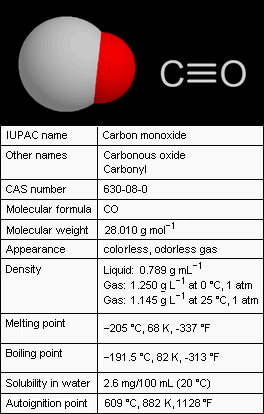 (CC) Drawing: Milton Beychok
Carbon monoxide (CO), also referred to as carbonous oxide, is a colorless, odorless, and tasteless gas that is slightly lighter than air. Exposure to high levels of carbon monoxide is extremely toxic to humans and animals. Conversely, small amounts of carbon monoxide are produced in normal animal metabolism and it is thought to have some normal biological functions.

Carbon monoxide consists of one carbon atom and one oxygen atom. It is the simplest member of the class of inorganic compounds known as oxocarbons which includes carbon dioxide (CO2), carbon suboxide (C3O2), mellitic anhydride (C12O9) and many others. When combined with a metal (i.e., an organometallic complex), the carbon monoxide is a ligand called carbonyl : for example, in nickel carbonyl with the formula Ni(CO)4.

Carbon monoxide is produced by the partial combustion of carbon-containing substances. It is produced when there is not enough oxygen to form carbon dioxide, such as when operating a stove or an internal combustion engine in an enclosed space.

In the presence of oxygen, carbon monoxide burns with a blue flame, producing carbon dioxide.[1] Coal gas, which was widely used before the 1960s for domestic lighting, cooking, and heating, had carbon monoxide as a significant constituent. Iron smelting and other current technological processes still produce byproduct carbon monoxide.[2]

Worldwide, the largest source of carbon monoxide is from the photochemical reactions in the troposphere that generate about 5 x 1012 kilograms per year.[3] Other natural sources of CO include volcanoes, forest fires, and other forms of combustion. 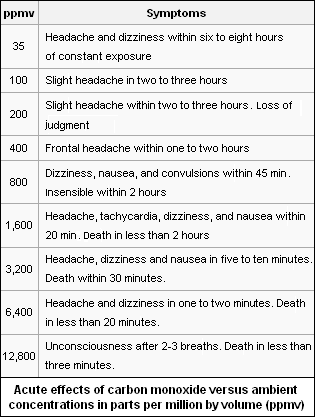 (CC) Drawing: Milton Beychok
Carbon monoxide poisoning is the most common type of fatal air poisoning in many countries. It combines with hemoglobin in the red blood cells of humans and animals to produce carboxy hemoglobin, which is ineffective for delivering oxygen to bodily tissues. Exposure to carbon monoxide levels as low as 667 parts per million by volume (ppmv) may cause up to 50 % of the body's hemoglobin to convert to carboxyhemoglobin[4] which may result in seizure, coma, and fatality.

The adjacent table lists the typical symptoms caused by exposure to various concentrations of carbon monoxide, expressed in parts per million by volume (ppmv).

On average, exposures to levels of 100 ppm or greater is dangerous to human health. In the United States, the long-term workplace exposure levels are limited by the Occupational Safety and Health Administration (OSHA) to less than 50 ppmv averaged over an 8-hour period;[5] in addition, employees are to be removed from any confined space if an upper limit (ceiling) of 100 ppmv is reached.

The most common symptoms of carbon monoxide poisoning may resemble other types of poisonings and infections, including symptoms such as headache, nausea, vomiting, dizziness, fatigue, and a feeling of weakness. Infants may be irritable and feed poorly.[6]

Exposures to carbon monoxide may cause significant damage to the heart and central nervous system, especially to a sub-cortical component of the brain, often with long-term effects.

Carbon monoxide may have severe adverse effects on the fetus of a pregnant woman.

Sources and occurrences of carbon monoxide

As mentioned above, the largest sources of carbon emissions are natural in origin. The anthropogenic (man-made) sources are quite small by comparison.

The graph below lists the anthropogenic sources of carbon monoxide in the United States during 2008:[7] 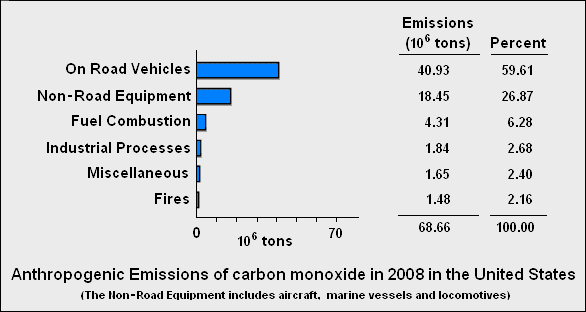 Carbon monoxide occurs in various natural and artificial environments. Typical concentrations in parts per million by volume are as follows:[8][9][10] 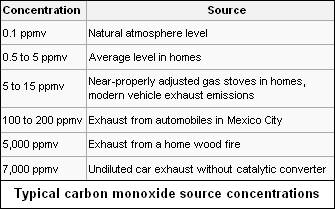 Carbon monoxide at low levels occurs in the atmosphere, primarily as a product of volcanic activity but also from natural and man-made fires such as slash and burn agriculture, burning of crop residues, and sugarcane fire-cleaning. Combustion of fossil fuels also results in carbon monoxide emissions to the atmosphere.

Carbon monoxide occurs as a major atmospheric pollutant in most urban areas, chiefly from the engine exhausts of vehicles, portable and back-up generators, lawn mowers, leaf blowers, etc. One of the most important cases of carbon monoxide buildup is in the presence of urban street canyons or other semi-enclosed volumes created by man-made structures. The incomplete combustion of various other fuels such as natural gas, fuel oils, coal, wood, charcoal, LPG, and trash also contribute to the emissions of carbon monoxide in urban areas.

Indoors and in other closed environments, the concentration of carbon monoxide can quickly and unnoticeably rise to dangerous and fatal levels. The true number of incidents of carbon monoxide poisoning is unknown, since many non-fatal exposures go undetected and unreported. Carbon monoxide poisoning is the most common cause of injury and death due to poisoning worldwide. Poisoning is typically more common during the winter months, probably because of the increased domestic use of gas furnaces, gas or kerosene space heaters, and kitchen stoves during the winter months, which if faulty and/or used without enough ventilation, may produce excessive carbon monoxide.[11][12][13]

Carbon monoxide gas has many applications in large-scale chemicals manufacturing. Large quantities of aldehydes are produced by the hydroformylation reaction of alkenes, carbon monoxide, and hydrogen. Hydroformylation is coupled to Shell Chemical's Higher Olefin Process (SHOP) to produced detergent precursors.

In the Monsanto process, carbon monoxide and methanol react in the presence of a rhodium catalyst and hydroiodic acid to produce acetic acid.

Another industrial use for pure carbon monoxide is the Mond process, sometimes called the Carbonyl process, which is utilized to extract and purify of nickel from the raw nickel ore.

Following the first report that carbon monoxide is a normal neurotransmitter in 1993,[19] as well as one of three gases that naturally modulate inflammatory responses in the body (the other two being nitric oxide and hydrogen sulfide), carbon monoxide has received a considerable attention as a biological regulator. All three gases are known to act as vasodilators, and encouragers of neovascular growth.[20] However, the issues are complex, as neovascular growth is not always beneficial, since it plays a role in tumor growth, and also the damage from wet macular degeneration, a disease for which smoking (a major source of carbon monoxide in the blood, several times more than natural) increases the risk by a factor of about five.

Many laboratory studies worldwide have been made of the anti-inflammatory and cytoprotective properties of carbon monoxide. These properties have the potential to prevent the development of pathological conditions such as ischemia reperfusion injury, transplant rejection, atherosclerosis, severe sepsis, severe malaria, or autoimmunity. Clinical tests involving humans have been performed, however the results have not yet been released.[21]

Carbon monoxide is used in modified atmosphere packaging systems in the United States, mainly with fresh meat products to keep them looking fresh. The carbon monoxide combines with myoglobin to form carboxymyoglobin, a bright-cherry-red pigment. This stable red color can persist much longer than in normally packaged meat.[22] Typical levels of carbon monoxide involved in the facilities that use this process are between 0.4 to 0.5 percent by volume.

The technology was first given "generally recognized as safe" (GRAS) status by the U.S. Food and Drug Administration (FDA) in 2002 for use as a secondary packaging system, and does not require labeling. In 2004, the FDA approved the use of carbon monoxide in packaging, declaring that it does not mask any spoilage odor.[23] Despite this ruling, the process remains controversial for fear that it masks spoilage.[24] The process is prohibited in many countries, including Canada, Japan, Singapore and the European Union.