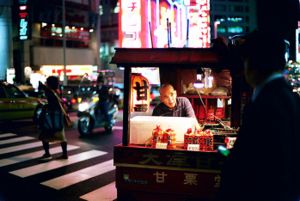 Japan's capital, Tokyo, comprises cities of packed streets, neon logos and the ancient tucked away alongside the modern.
Photo © by Sonny Santos, used by permission.

Japan is an island nation in East Asia; its closest neighbours are Russia, China, Taiwan, and North and South Korea. Japan and Korea share philosophical, political and religious roots with China which strongly influenced the early development of both societies. The Japanese trace their origins back thousands of years, mingling their own distinct identity with ideas and influence brought mainly from China. Having chosen isolation for hundreds of years, Japan awoke with a new, international outlook in the nineteenth century, bringing significant influence to cultures worldwide. Despite a long period of nationalism in the twentieth century that eventually brought the country ruin, Japanese culture continues to make inroads into the lives of distant peoples - from crazes for kimono, manga comics and toys to an increasingly international military role, emerging via an economy which produces the newest and most innovative technology.

Japan and its neighbours.

Japan is a country of over 3,000 islands, tapering down alongside the Pacific coast of the Asian continent. The four largest islands, nestled together, are Hokkaido, Honshu, Shikoku and Kyushu. Northerly Hokkaido experiences Siberian-style conditions in winter, while the extreme south is tropical. The country often experiences typhoons, with Kyushu regularly receiving a particularly severe battering; two in 2007 killed three people and drove thousands from their homes.[1][2] In addition, the islands experience tsunamis, earthquakes, volcanic activity, tornadoes, heat waves and avalanches; sophisticated technology helps the population cope.

Japan's population peaked in 2006; the following years saw consecutive declines, with an official population of 125.77 million by October 2010. That year, the overall decline in the population topped 100,000 for the first time in the post-war era, with the number of people shrinking by 123,000. The birth rate increased slightly and stabilised after 2006's record low, but this was offset by all-time-highs in the death rate. 51% of the population are female, and over-65s now make up about a quarter of the country.[3] Minority ethnic groups such as the Ainu and the Okinawans are Japanese citizens and are not separately recognised in these figures, and none take into account non-Japanese citizens, including 'special permanent residents' comprising mainly ethnic Koreans, who have in most cases lived in Japan for more than one generation. 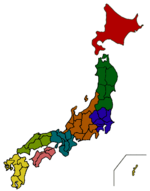 Japan's cities, particularly on the main island of Honshu, are densely populated. Of Japan's eleven cities with a population exceeding one million, nine are on Honshu, and four of these - Tokyo (a 'city' of many smaller cities), Yokohama, Saitama and Kawasaki - lie within the Greater Tokyo Area, the most populous urban region in the world. Tokyo itself includes 12,361,736 people as of 2007 within its municipal borders, making it the most populated area in Japan. Honshu is also host to other large urban regions centred around Nagoya and Osaka; with Tokyo, these three areas now include half the country's population for the first time ever.[4]

In 1947 the proportion of Japanese over 65 was around 5% of the population, well below that in the UK, France or the USA. Today the elderly account for one-fifth of the population, and average lifespans have grown remarkably. Life expectancy today is 82, up from a little over 50 in 1947.

The baby boom came in 1947-1949, when 2.7m children a year were born. In 2007 the baby-boom generation began to retire (60 is the mandatory retirement age at most companies). Japan's birth rate fell below the replacement rate of 2.1 in the early 1970s. It slid to a low of 1.26 in 2005. In 2005 the population began to fall in absolute terms, despite increasing life expectancy. It is now shrinking at a pace unprecedented for any nation in peacetime. The National Institute of Population and Social Security Research estimates a total population of 95m by 2050, compared to 127m in 2007, with the elderly accounting by then for two-fifths of the total.[5] 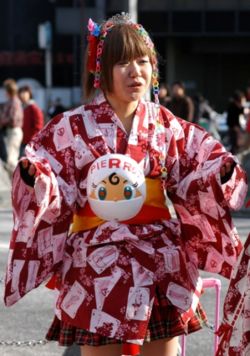 Chinese-derived characters (漢字 kanji) are used almost everywhere in Japan, but this does not mean that this nation is little more than a Chinese outpost. Though much of Japanese culture historically has its roots in early China, it also developed separate ideas, such as the Shinto religion. Likewise, Japan's status as an island country has meant that its infrastructure emerged with some degree of - often self-imposed - isolation. It is an example of what Samuel Huntington calls a lone state.

Some Japanese may identify themselves as one race, one culture and one people,[6] but Japan is home to several immigrant communities, and indigenous peoples in much-reduced numbers. The different regions were not culturally unified until well into the nineteenth century. This meant that only the spread of a formal spoken variety of the Tokyo dialect as the standard language (標準語 Hyoojungo) led to linguistic unification as the twentieth century dawned. Even today, most Japanese dialects are not readily understood by other speakers.

Tengu-geta shoes can be seen at traditional festivals.
Photo © by Sonny Santos, used by permission.

Traditional Japanese culture tends to promote a deep regard for accuracy, a sense of both complexity and simplicity, and a goal of producing a work of great beauty; for example, origami, or paper-folding, requires a series of intricate steps to be carefully followed to produce a final masterpiece from a single sheet. Similarly, the tea ceremony (茶道, chadoo or sadoo[7]) remains a popular way of simply drinking tea in tranquil surroundings - where not a cup must be out of place.

Painting, calligraphy and pottery are examples of Japanese artistry. Two famous examples are Ukiyo-e (浮世絵), or woodblock prints, which have been produced for centuries, and nowadays manga (漫画) comics fill bookshops and news stands inside and outside the country. Manga is just one manifestation of a highly literate society which first adapted Chinese characters to a relatively different language, produced its own highly regarded literature, and ultimately bestowed hundreds of words on other tongues, such as karate and karaoke to name but a few in English. Similarly, Japanese has absorbed a large amount of vocabulary from English and other languages.

Young Japanese in particular follow fashion trends from overseas, but at the same time have developed their own trendy subcultures that to outsiders may border on the bizarre - teenagers dressed in maid outfits or in cute Victorian-style 'Lolita' costumes are more common a sight in Tokyo than traditionally-dressed maiko (妓) girls in historic Kyoto.

In 1603, the Tokugawa shogunate (military dictatorship) ushered in a long period of isolation from foreign influence in order to secure its power. For 250 years this policy enabled Japan to enjoy stability and a flowering of its indigenous culture. Following the Treaty of Kanagawa with the United States in 1854, Japan opened its ports and began to intensively modernise and industrialise.

During the late nineteenth and early twentieth century, Japan became a major regional power that was able to defeat the forces of both China and Russia. It occupied Korea, Formosa (Taiwan), and southern Sakhalin Island.

The Showa Period (1926-1989), under Emperor Hirohito, was an era of incredible change from traditional villages to modern cities, form a great empire and early success in World War II to utter ruin and surrender. In 1931 seized Japan Manchuria, and in 1937 it launched a full-scale invasion of China. Japan attacked U.S. at Pearl Harbor in late 1941, and soon occupied much of East and Southeast Asia. In a series of spectacular naval battles, such as the Battle of Midway, Japan lost control of the Pacific and was subject to massive air raids culminating in nuclear attacks on Hiroshima and Nagasaki.

Japan was occupied by the U.S. until 1951, with Emperor Hirohito leading a regime that modernized and liberalized its economy and polity. Japan become an economic superpower, staunch American ally, and a democracy that gave up all its empire and its military power. The emperor remains a powerful symbol of national identity and unity. Political power rests in networks of powerful politicians, bureaucrats, and business executives. The economy experienced a major slowdown starting in the 1990s following three decades of unprecedented growth, but Japan still remains a major economic power, both in Asia and globally.