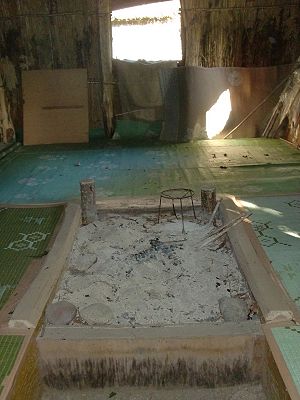 (CC) Photo: John Stephenson
The interior of this replica Ainu dwelling, or cise, shows where food was prepared. In the background is a special opening that acted as a separate entrance for Ainu spirits.

The Ainu (アイヌ・イタㇰ, Aynu or Аину) are the indigenous people of northern Japan and the Russian Far East, specifically Hokkaido, Sakhalin and the Kuril Islands. Their traditional culture was one of hunting, fishing and farming, and involved animist worship. Though Ainu numbers have declined in the past few centuries, communities remain in both their homelands and further afield, some still speaking the Ainu language. The Ainu are ethnically, culturally and linguistically distinct from the main ethnic Japanese and Russian peoples, but in many ways have been assimilated into wider society, historically not by choice.