The Battle of Midway was a critical battle of the Pacific Theater of Operations in the Second World War. Fought in June 1942, it ended Japanese strategic expansion and put them on the long-term defensive.

Its principal objective, from the Japanese standpoint, was to extend their defensive perimeter, which the Doolittle Raid had convinced them was not far enough east. The core Japanese strategy was to lure the American fleet into the Western Pacific, where the Japanese would fight it on terms favorable to them. They saw their island airfields as a key strength of fighting in the Western Pacific.

The U.S. was unaware, until after the war, that the Doolittle Raid, in April, had so significantly affected Japanese thinking. Also having a significant effect, not fully understood by the two sides, was the Battle of the Coral Sea in May. While the latter cost the United States more warship tonnage than it did the Japanese, it also damaged two Japanese carriers that were not available for Midway.

Nimitz stayed ashore in Hawaii, where he did not need to maintain radio silence and could exert overall control, while Yamamoto was isolated. Yamamoto's plan assumed the Americans would not detect any of the Midway force; Nagumo did not have a good contingency response when the striking force was found.

A large Japanese force was sent north to attack and invade the Aleutian Islands, off Alaska. Yet another force that carried the Midway invasion unit, as well as supporting submarines and scout aircraft.

After the Battle of Coral Sea, he had four frontline carriers operational — Sōryū, Kaga, Akagi and Hiryū. One of the effects of Coral Sea had been to put two of the six carriers that had attacked Pearl Harbor out of service, as well as losing pilots.

The U.S. force had no battleships, only carriers, cruisers and destroyers, supported by land-based aircraft flying from Midway.

Fully operational were the carriers USS Enterprise (CV-6) and USS Hornet (CV-8). USS Saratoga (CV-3) was out of action, undergoing repair after a torpedo attack, and Yorktown sailed after three days' work to repair her flight deck and make essential repairs, with civilian work crews still aboard.

Using contemporary terminology, the United States won the intelligence preparation of the (Midway) battlespace.[1] Japan had planned surveillance of the U.S. fleet by long range seaplane, as a result of an abortive identical operation in March, so U.S. carriers were able to proceed to a flanking position on the approaching Japanese fleet without being detected.

U.S. intelligence knew the Japanese were planning an invasion of a more eastern U.S. base, from cryptanalysis of communications in the JN-25 communications channel. The actual target, however, was a "code within the code"; JN25 messages referred only to impending invasion of "AF". Analysts in Honolulu and Washington differed, however, if AF referred to a location in the Central Pacific or in the Aleutians. Midway Island was the likely Central Pacific target, but the US commanders needed to know where to concentrate their forces. Jason Holmes, a member of the Honolulu station, knew that Midway had to make or import its fresh water, so arranged for a message to be sent, via a secure undersea cable, to the Midway garrison. They were to radio a message, in a cryptosystem known to have been broken by the Japanese, that their desalination plant was broken. Soon afterwards, a message in JN-25 said that "AF" was short of fresh water, confirming the target was Midway. In May, Allied codebreakers discovered Midway was the true target. [2]

As anticipated by American commanders, the Japanese fleet arrived off Midway on June 4 and was spotted by PBY Catalina patrol aircraft. By the time the Japanese had launched planes against the island, U.S. Army Air Force planes had scrambled and were heading for Nagumo's carriers. However, initial U.S. attacks were poorly coordinated, piecemeal, and ineffectual; they failed to score a single hit and half of them were lost. At 09:20 the first carrier aircraft arrived when Hornet's TBD Devastator torpedo bombers attacked; Zero fighters shot down all 15. At 09:35, 15 TBDs from Enterprise skimmed in over the water; 14 were shot down by Zeroes. The carrier aircraft had launched without coordinating their own dive bomber and fighter escort coverage so the torpedo bombers had arrived first, distracted Nagumo's Zeros. When the last of the strike aircraft arrived, the Zeros could not protect his ships against a high-level dive bomber attack.

In addition, his four carriers had drifted out of formation, reducing the concentration of their anti-aircraft fire. In his most-criticized error, although Nagumo ordered aircraft armed for shipping attack as a hedge against discovery of American carriers, he changed arming orders twice, based on reports an additional strike was needed against Midway and the sighting of the American task force, wasting time and leaving his hangar decks crowded with refueling and rearming aircraft and ordnance stowed outside the magazines. [3] 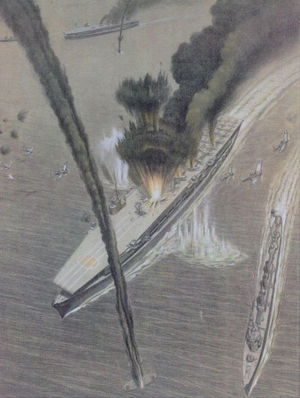 From the air attack on the Japanese carriers Kagi and Akagi at the Battle of Midway. Midway was a decisive victory for the U.S. Navy

Capt. Mitsuo Fuchida, air operations officer, had been disabled by appendicitis before the battle, and then was wounded in the sinking of his carrier.

When SBD Dauntless dive bombers from Enterprise and Yorktown appeared at 10,000 feet, the Zeroes at sea level were helpless; the dive bombers sank Sōryū, Kaga, and Akagi. Hiryū survived this wave of attacks and launched an attack against the American carriers which caused severe damage to Yorktown (which was later finished off by a Japanese submarine). A second attack from the U.S. carriers a few hours later sank the Hiryū.

Yamaguchi, considered one of Japan's best carrier admirals, along with Jisaburo Ozawa, was more steeped in the bushido code. He chose to go down with Hiryū, depriving Japan of a significant talent. Ozawa, in contrast, survived a series of sinkings but continued to provide expert command. A number of writers have speculated that Yamaguchi might have replaced Isoroku Yamamoto, after his death, as Commander-in-Chief, Combined Fleet, but it must be questioned if the Imperial Japanese Navy's emphasis on seniority would have permitted this.

While Yamamoto had hoped for a night gunfire engagement, with his enormous gunnery superiority with the Main Body, RADM Raymond Spruance, in tactical command, refused that fight. Spruance felt his responsibility was continuing the defense of Midway, but also conserving his depleted resources.

On June 10, the Navy gave partial results to the national level military conference; only the Emperor received the accurate damage reports, which he did not convey to the Army; the Army assumed, for a time, that Combined Fleet was intact. The Navy conducted no after-action review, but cancelled plans to capture Fiji and Samoa, and to increase control of the Indian Ocean. Subsequent operations in the Solomons Islands were conducted with inadequate air cover. [4]