From Citizendium
(Redirected from Chester Nimitz)
Jump to: navigation, search 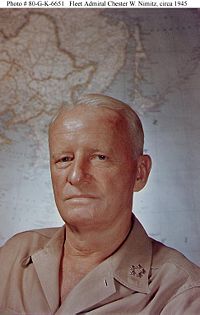 Chester William Nimitz (1885-1955) was Commander in Chief, Pacific Ocean and Pacific Ocean Areas (CINCPAC) in World War II, Chief of Naval Operations, and Fleet Admiral. As overall commander of the Central Pacific forces during World War Two he was responsible for the U.S. advance through the Marshalls, Marianas, and the initial assaults on the Japanese home islands at Iwo Jima and Okinawa. Following the war, he served as the Chief of Naval Operations before retiring in 1948. In retirement, he served for a time as a United Nations good will ambassador.

At Annapolis, the yearbook described him as a man "of cheerful yesterdays and confident tomorrows." Shortly after being commissioned an ensign, which, as opposed to the commission at Academy graduation today, required sea duty, he became an especially young destroyer commander. In 1907, however, he ran the USS Decatur aground, normally a career-ending event.[1]

Returning to the U.S., he qualified in submarines. As leading-edge technology, this molded him as a naval officer: he was always comfortable with adopting appropriate new technology, such as radar, communications intelligence, aircraft carriers and the submarine as a strategic weapon. [2] One author commented that “radar became essential at sea and aloft; Nimitz considered it [radar] as revolutionary as the steam engine. . . Information technology made the Orange [War] Plan work better.”[3]

As a young officer, he received a Silver Lifesaving Medal for rescuing a crewman washed overboard from his boat, and moved into command of the Atlantic Submarine Flotilla in 1912. In 1913, he worked on building the diesel engines for the tanker USS Maumee, and then sent to Germany and Belgium to study diesel design, which remained a specialty throughout his career. In World War I, he was assigned as Chief of Staff to the commander of US submarines in the Atlantic, Admiral S. S. Robinson.

In September 1918, he came ashore to duty in the office of the Chief of Naval Operations and was a member of the Board of Submarine Design. His first sea duty in big ships came in 1919 when he had one year's duty as Executive Officer of the battleship USS South Carolina. After that, he was assigned to Pearl Harbor where he directed building of the submarine base, and then commanded Submarine Division 14 (COMSUBDIV Fourteen).

In 1922, he was assigned as a student at the U.S. Naval War College. While there, he studied under Clarence Williams one of the authors of the basic Pacific Fleet war plan that formed the basis for operations in WWII.[4] After graduation, he returned to work with Admiral Robinson, then Commander of Battle Forces, and then Commander in Chief, U.S. Fleet. During that time, he introduced the circular cruising formation to the fleet, first based on a battleship and then on the early aircraft carrier, USS Langley, in 1924. [5]

For the new Reserve Officers Training Program program, he became, the first Professor of Naval Science and Tactics for the Unit at the University of California at Berkeley. Throughout the remainder of his life he retained a close association with the University.

Nimitz returned to sea duty, commanding a submarine division, and then a support ship. His first major surface command, in 1933, was the heavy cruiser USS Augusta, flagship of the Asiatic Fleet.

His next shore duty, in 1935, was Assistant Chief of the Bureau of Navigation, a traditional name for the Navy office in charge of personnel. During his time there, he came to the notice of Franklin D. Roosevelt.

Promoted to rear admiral, he commanded a cruiser division and then a battleship division, returning to the Bureau of Navigation in 1939.

During the Second World War, Nimitz shared command of the Pacific theater of operations with Douglas MacArthur, who headed the Southwest Pacific Area. As opposed to MacArthur's towering ego and imperious manner, Nimitz was a relaxed man who inspired loyalty. When he relieved Admiral Husband Kimmel after the Battle of Pearl Harbor, Nimitz made a point of keeping Kimmel's staff and making only gradual changes, rather than seeking blame. He took command at Pearl Harbor on December 20, 1941, being sworn in on the deck of the submarine USS Grayling (SS-209). That deck was symbolic of his identification, first and foremost, as a submariner—and being one of the few undamaged vessels left in Pearl.[6] Beyond the morale-building effect of retaining staff, he immediately pointed out positives, such as the U.S. aircraft carriers and submarine base being undamaged.

It has been wryly suggested that he had two enemies, the Japanese and MacArthur. Nimitz chose a less glorious command style than his approximate Japanese counterpart, Admiral Isoroku Yamamoto. Nimitz preferred to stay on shore with full radio communications than to be at sea with the fleet as Yamamoto did. Nimitz's ability to direct operations without the need for radio silence was a strategic advantage. Yamamoto, on the other hand, because of radio silence was not able to keep situational awareness at the Battle of Midway.

Chief of Naval Operations Ernest J. King gave Nimitz the initial orders to hold the Hawaii-Midway and Hawaii-Samoa lines of communication while conducting raids if necessary during the necessary period of defense.[7] U.S. planners recognized that it would take about two years before the U.S. navy was in a position to advance in force towards Japan. On February 1, 1942, the first offensive action taken by the U.S. Navy was a carrier air strike on Japanese facilities at Kwajalein, the main Japanese base in the region.[8]

Far earlier than Yamamoto expected, Nimitz took the offensive to the Japanese in the Doolittle Raid, the Battle of the Coral Sea, and, in what is generally believed to be the turning point of World War II in the Pacific, the Battle of Midway.

He visited Midway in May 1942 and was personally involved in the intelligence preparation for the high-risk Midway operation. He was also involved in concentrating forces for the battle, including patching together the aircraft carrier USS Yorktown (CV-5), which had been damaged in the Battle of the Coral Sea. The Pearl Harbor naval base had estimated three months for repairs, but through a maximum effort repair she was turned around in three days.[9]

Besides logistics and concentration of forces, he made extensive use of deception.[10] After the Battle of the Coral Sea, in which the Japanese believed they sank two, not one, carriers, he sent USS Hornet and USS Enterprise toward the Solomon Islands, to suggest to the Japanese that the American carriers were in the South Pacific, far from Midway. Adding to this, he had a cruiser, in the South Pacific, transmit radio signals that seemed to be from the surviving carriers. [11]

While Nimitz kept Kimmel's staff at Pearl Harbor, he replaced senior officers that did not meet the needs of the time.

Vice Admiral Robert Ghormley had commanded the Southwest Pacific fleet, but, in Nimitz's opinion, was tired and lost confidence. Nimitz, on visiting Ghormley, was shocked at his health; Nimitz always made time for his own fitness and relaxation.[12] Ghormley was replaced by Admiral William Halsey.

Nimitz developed a concept of having one battle fleet but two command staffs. When the fleet was under the command of Halsey, it was designated United States Third Fleet, while Spruance and his staff planned the next operation. When Spruance took command, the combat organization was designated United States Fifth Fleet, with Halsey and his staff preparing for the next campaign.

When he gave a speech on 1 March 1943, saying the preparations for strategic bombardment of Japan had started, the Japanese took it seriously, and it became an impetus to their plans for suicide tactics. "Nimitz's reputation in Japan was spotless. As of that date, the Americans had not been caught in a single lie or misrepresentation about the Pacific War. If Nimitz said something was so, the Japanese were inclined to believe him."[13]

He authorized a mission, with Joint Chiefs of Staff and Presidential approval, to shoot down his counterpart, Admiral Isoroku Yamamoto, on 18 April 1943. Knowledge of Yamamoto's route came from cryptanalysis, and it was a careful balance between risking the Japanese learning of that American intelligence source, and the loss of a commander critical to Japan.

Operation Flintlock was the main campaign against the Marshall Islands. Shore bombardment began in December 1943, principally against Kwajalein and surrounding islands. The priorities in 1943, Mille, Maloelap, and Wotje in the Ratak chain, and in the Ralik chain, Jaluit, Kwajalein, and Eniwetok. Jaluit was a seaplane base, all of the other Ratak sites were airfields, and the Ralik locations were anchorages for naval ships. [14] Kwajalein was taken faster than had been expected, and it was under control by February.

He accelerated Operation Catchpole, the invasion of Eniwetok, had been scheduled for May, but the operation was accelerated to mid-February.[15]

Beginning of the end

Winning the Battle of Saipan in June-July 1944, followed by the fall of Prime Minister General Hideki Tojo's government, had created a peace faction in the Imperial Japanese Navy.

The Japanese began to use kamikaze tactics seriously in the Philippines campaign of late 1944. They were sufficiently effective that Nimitz and Halsey insisted on strict secrecy to avoid encouraging the enemy to concentrate on this method. [16]

On 19 December 1944, he was advanced to the newly created rank of Fleet Admiral.

As the war progressed, he moved his operational headquarters to Guam in January 1945.

On 2 September 1945, he was the United States signatory to the surrender terms aboard the battleship USS Missouri (BB-63) in Tokyo Bay.

Nimitz hauled down his flag at Pearl Harbor on November 26, 1945, and on December 15 he relieved Fleet Admiral Ernest J. King as Chief of Naval Operations. Nimitz served in this post for a term of two years. The unquestionably abrasive King had wanted Nimitz to replace him, but the new Secretary of the Navy, James Forrestal, despised King and did not want a potential protege. Nimitz, somewhat hurt by the controversy, insisted, but accepted a compromise two-year appointment. Forrestal found Nimitz to have a very different personality than King, but Forrestal's damage had been done.[17]

After a request by the defense counsel of German Admiral Karl Doenitz, he sent a statement to the Trial of the Major War Criminals, explaining that United States submarine operations were conducted in a manner very similar to that of Germany. This may well have saved Doenitz from a death sentence for abandoning victims at sea, and was the only tu quoque defense accepted by the Tribunal.

On 1 January 1948, he reported as Special Assistant to the Secretary of the Navy in the Western Sea Frontier, a make-work job that did take him back to his beloved California.

In March of 1949, he was nominated as Plebiscite Administrator for Kashmir under the United Nations. When that did not materialize he asked to be relieved and accepted an assignment as a roving goodwill ambassador of the United nations, to explain to the public the major issues confronting the U.N. In 1951, President Truman appointed him as Chairman of the nine-man commission on International Security and Industrial Rights. This commission never got underway because Congress never passed appropriate legislation.[1]

He was a regent of the University of California and did much to restore goodwill with Japan by raising funds to restore the battleship IJN Mikasa, Admiral Heihachiro Togo's flagship at the Battle of Tsushima Strait in 1905.

Nimitz-class U.S. aircraft carriers, the current generation of nuclear-power carriers, are named after him.

At the Admiral Nimitz Historical Center in his home town of Fredericksburg, Texas, there is not only a building of his artifacts, but a "Japanese Garden of Peace, built with donations from the very Japanese he fought, in Nimitz's honor and memory."[18]