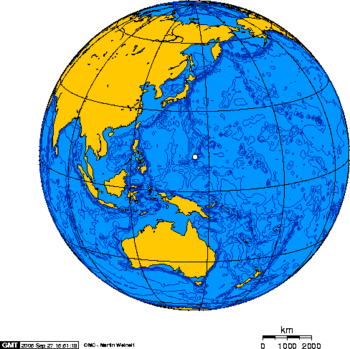 Guam is a 543-square-kilometre island in the Pacific Ocean. It is in the geographic Marianas Islands of Micronesia but is not part of the political Commonwealth of the Northern Marianas Islands. It is currently an unincorporated territory of the United States, which acquired the island from Spain in the Treaty of Paris after the Spanish American War. During negotiations with Spain over the island, President McKinley (on the recommendation of the Naval War Board) wanted negotiators to demand the cession of Guam so that it could serve as a coaling station for U.S. ships bound for the Philippines. It was the only island of the Marianas in which the U.S. was interested and the remainder were sold to Germany in 1899. In spite of the expectation of Guam becoming an important stop on the route to the Philippines, Guam never developed in this way. The U.S. fleet routinely reached Asia by way of the Suez Canal and Indian Ocean in the days before the construction of the Panama Canal. By the time that the Panama Canal was in operation (1914), oil-fuel ships were common and the strategic importance of Guam fell further.[1]

Guam is a major forward deployment base for U.S. military forces, including heavy bombers normally based in the U.S. and prepositioning ships for U.S. Marine Corps and U.S. Air Force use. The major installation is Anderson Air Force base.

About three-quarters of the way from Hawaii to the Philippines, at the geographic coordinates: 13 28 N, 144 47 E