The Battle of Iwo Jima in February 1945, was a victory by 70,000 American Marines over 22,000 Japanese defenders of a small island in the Western Pacific. The battle became iconic in America as the epitome of heroism in desperate hand-to-hand combat:

Among the men who fought on Iwo Jima, uncommon valor was a common virtue. 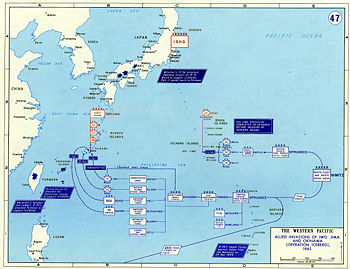 Iwo Jima was a small island (only 8 square miles) on the route of the B-29s from Saipan and Tinian to Japan. Airfields there could provide emergency landing fields for stricken Superfortresses and bases for fighter escorts, so Admiral Chester Nimitz ordered United States Fifth Fleet to take it. The invasion was code named "Operation Detachment" and was the CINCPAC Operation Plan No. 11-44. Following a massive naval and air bombardment, 70,000 Marines landed on February 19, 1945.

Nimitz's major stated goal was to use Iwo Jima as an escort fighter base against the Japanese home islands.[1] In practice, it turned out to be an emergency landing field for damaged B-29s.

The loss of Iwo Jima, which Japaneses considered to be part of their homelands directly administered by the Tokyo metropolitan government, was a psychological blow. It was the first successful foreign invasion of Japan in 4000 years. It also meant that attacks on Okinawa and Japan itself were near.[2]

Since land-based aircraft would be a major threat to the Okinawa operation, planned for April 1, any attrition to that threat, by the Iwo Jima landing scheduled for February 19, would support both operations. Not only were the battles themselves relevant, but Japanese aircraft production became a high bombing priority. Airbases on the Japanese island of Kyushu would also be attacked.

Carriers scheduled for Iwo Jima needed to be ready to start operations against Kyushu on 18 March and on Okinawa on 23 March.

Lt. General Tadamichi Kuribayashi was ready with his 21,000 soldiers (far more than expected). His strategy was not to win, but to make the Yankees suffer far more than they could endure. He took advantage of the volcanic island's thousand caves and an ample supply of concrete, to build a vast underground defensive network interconnected by deep tunnels. His hidden artillery, mortars and machine guns survived the bombardment and stunned wave after wave of oncoming Marines. Each pillbox in a mutually-supportive grouping had to be destroyed by frontal assault.

Iwo Jima received the heaviest air and naval bombardment of any objective in the Pacific. [3] While the preparation certainly damaged the Japanese, many of their installations were deeply buried, and effectively immune from the types of weapons used.

Marine commanders asked for a longer Naval preparation than was provided; the Navy rationale for not granting the request was: The Navy's major considerations in turning down Marine requests may be summarized as follows:

After the grueling experience of cave warfare on other islands such as Peleliu, the Marines were ready with new tactics and new weapons, especially "bazooka" man-portable rocket-launchers using shaped charges, and both backpack and tank-mounted flame throwers.

On D+4 the 28th Marines planted the Stars and Stripes on Mount Suribachi; watching in awe, Navy Secretary James Forrestal exclaimed that this dramatic moment guaranteed "there will be a Marine Corps for the next 500 years!"

Associated Press reporter Joe Rosenthal's photograph of six soldiers raising the American flag on February 23, 1945 is often cited as the most reproduced photograph of all time. It was indeed of Marines and a Navy corpsman on Mount Suribachi, but it was not the first flag raising; a smaller flag had been raised, and Rosenthal captured the raising of a larger one. The photograph became the archetypal representation not only of that battle, but of the entire Pacific war. Of the six soldiers in Rosenthal's photo, only three survived the battle.

The Japanese fought to the last man, killing 6,000 Marines and wounding 20,000 more. A total of 27 American soldiers received Medal of Honor during this battle. Seven of the Marine recipients won the medal by throwing themselves atop grenades to save their comrades. Japanese analysis of the battle, and American public opinion, suggested their most effective strategy would be to inflict maximum casualties.

The iconic memory of Iwo Jima comprises the flag raising ceremony and memories of combat; the Japanese perspective was brought vividly to life in the film by Clint Eastwood, Letters from Iwo Jima (2007). The flag raising is often a theme in editorial cartoons, including both calls for heroism and parodies.[5]

Should Iwo Jima have been bypassed? Over 25,000 airmen eventually made emergency landings on Iwo, but most would have survived without the island. It was also possible to launch fighter and reconnaissance sorties from the island, but the necessity that operation was questioned. The subsequent nuclear attack missions flew from Tinian in the Marianas.

The Joint Chiefs of Staff had recommended the use of chemical weapons on Iwo Jima, prior to the landing. Franklin D. Roosevelt personally refused the request, which could have killed Japanese that survived conventional warfare. There certainly would have been political and propaganda consequences from the U.S. making first use of chemical weapons in the Second World War, although it is not clear that the Axis powers could have made effective retaliatory use.