The Battle of Okinawa, code-named "Operation Iceberg" was the capture of the Japanese island of Okinawa in spring, 1945, during World War II. It was the longest and bloodiest battle in American history.

Okinawa lies at the midpoint of the Ryukyu Islands chain, which forms a 750-mile arc between mainland Japan and Taiwan. A minor Japanese base during most of World War II, Okinawa became important when U.S. planners decided to seize it as a staging point for their projected invasion of Japan. Unlike little Iwo Jima, Okinawa was a large island (480 square miles) and it was essential to Operation DOWNFALL--the planned invasion of the main Japanese home islands of Kyushu and Honshu. Plans called for stationing 3,000 B-29s on Okinawa, each capable of dropping ten tons of bombs a day on Japan. Okinawa could furnish close-in airfields for the 240 AAF (U.S. Air Force) squadrons that were scheduled to provide tactical air support for "Downfall." U.S. fighters hopefully would stop 95% of the Kamikaze suicide plane attacks. Kamikazes opposing "Downfall" would not have to fly far from their home bases, thus minimizing the navigational incompetence of the untrained pilots.

Chester W. Nimitz and his strategists saw other advantages--the capture of Okinawa would isolate Japan from the south, though in fact U.S. mines, submarines and carrier sweeps had interdicted almost all shipping already. If the conquest of Japan did not lead all its field armies to surrender, Okinawa would be also a convenient base for a final assault on the large Japanese armies inside China. Nimitz sent in the Tenth Army under Army General Simon Bolivar Buckner, with 4 Army and 4 Marine divisions comprising 170,000 combatants. Raymond Spruance and his United States Fifth Fleet carriers would provide tactical air support since land bases were too far away.

Okinawa contained a half-million civilians (many of whom were conscripted into combat units, or bombed, or committed suicide.) 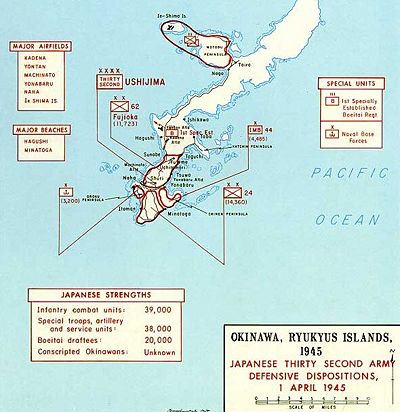 With the Tenth Army committed, Spruance's Navy had to stay nearby to protect them, making its ships highly vulnerable to 2,000 Kamikazes based 350-500 miles away in Japan itself. Lt. General Mitsuru Ushijima built on the lessons of Iwo Jima. He decided not to defend the beaches at all--he wanted to maximize casualties, and therefore wanted as many Americans on the island as possible. Ushijima realized his 100,000 men (with artillery but no tanks and no tactical air) were not enough to win. But, assuming they fought as ferociously as the warriors on Iwo, they would inflict so many casualties that the Americans would decide against attacking the far larger Japanese army on the home islands. Tokyo predicted that Washington would be aghast at the carnage and agree to a negotiated peace that would preserve the honor of Emperor Hirohito. Ushijima's basic strategy was sound, but at one point he let himself be convinced by aggressive subordinates that counterattacks would better serve the warriors' sense of honor. A series of frontal assaults cost Ushijima nearly all his experienced officers. Japan's inability to train enlisted men as officers exposed the brittleness of its hierarchical society.

On Apr. 1, 1945, American forces began a struggle that ended on June 21 with more than 115,000 Japanese defenders vanquished. Gen. Mitsuru Ushijima, commanding Japan's Thirty-second Army, allowed Gen. Simon Bolivar Buckner's four assault divisions of the U.S. Tenth Army to storm ashore virtually unopposed. Instead of trying to defend the beaches, Ushijima's troops burrowed into caves and tunnels in a succession of low ridges lying between the beaches and Shuri, then the capital. 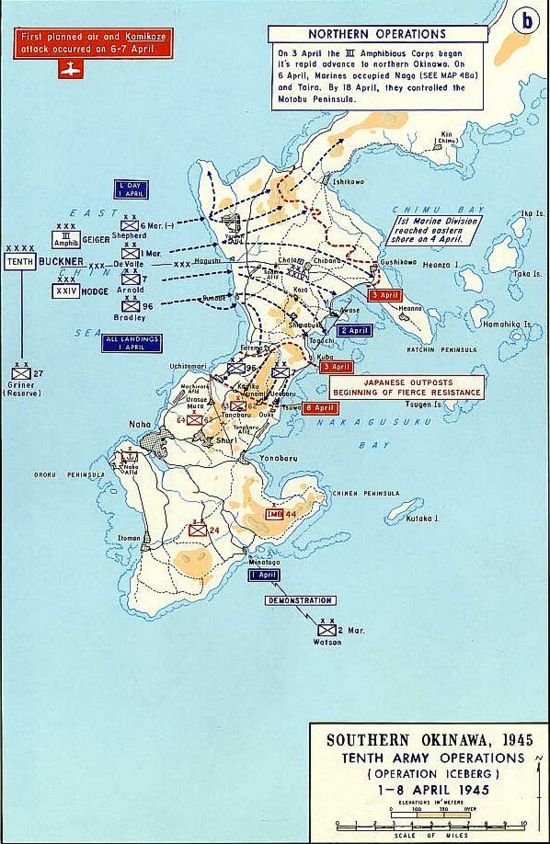 Invading U.S. Army and U.S. Marine Corps attackers eliminated them with "blowtorch" (flamethrower) and "corkscrew" (demolition charge) tactics at heavy cost to themselves. Driven late in May from their Shuri line, the Japanese retreated to Okinawa's southern tip, where both commanders perished at the battle's end. Ushijima died by ritual suicide (hara-kiri), and Buckner was killed by the explosion of one of the last artillery shells fired by the Japanese. Earlier, on the adjacent islet of Ie Shima, the famous war correspondent Ernie Pyle had been killed by a burst fired from a by-passed Japanese machine gun.

Equally bitter was the fighting at sea. Japan's air forces hurled more than 4,000 sorties, many by Kamikaze suicide planes, at U.S. and British naval forces. The bulk of the kamikaze attacks was absorbed by radar picket destroyers stationed north of Okinawa. U.S. losses totaled 38 ships of all types sunk and 368 damaged with 4,900 sailors killed.

In contrast to Iwo Jima, where Japanese and American casualties were 1-1, on Okinawa they were 2-1. America's massive advantage in firepower, plus superior numbers, training, mobility and medical care proved decisive. The ratio would have been even more favorable except that Buckner was an aggressive general who wanted to destroy all the defenders, not just bottle them up in the remote southern part of the island. He therefore ordered a series of high-casualty frontal assaults that finally cleared Okinawa. Buckner's assaults worked, but not before they allowed Ushijima to inflict 75,000 casualties. Meanwhile the Navy saw much of its fleet damaged by Kamikazes. At the end, in mid-June, Ushijima committed hara-kiri and Buckner was killed by a shell at his forward observation position. Washington kept secret the heavy losses at Okinawa, playing up instead the easy victories in Germany and the Philippines. Since Okinawa was in Nimitz's theater, the Army planners ignored its lessons and assumed that MacArthur's much easier conquests were more typical of what an invasion of the home islands would be like. American troops knew better. Exhausted and bloodied, they dreaded the prospect of fighting millions of Japanese hand to hand.