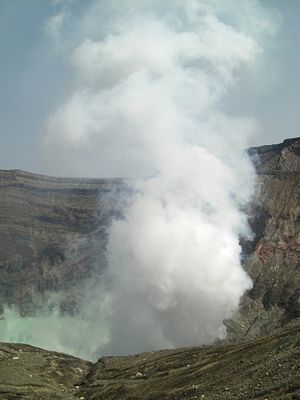 Kyushu (九州 Kyuushuu) is the third-largest and westernmost of the four main islands of Japan. In 2006, 13,316,000 people were recorded as living in its seven prefectures of Fukuoka, Kagoshima, Kumamoto, Miyazaki, Nagasaki, Oita and Saga.[1] This is approximately 11% of the total population of Japan.[2]

Towards the centre of the island is one of Japan's most famous geographical features, the Aso caldera; at the centre is Mount Aso (阿蘇山 Aso-san), the largest active volcano in Japan.

Kyushu is linked to various other parts of Japan by ferries and domestic flights, and bridges also connect the island to Honshu. This allows the national train network to reach the island, including the famous 'bullet train' (新幹線 Shinkansen).[3] Kyushu's own extensive network of roads and railway lines allow easy access to the major cities of Fukuoka, Nagasaki, Oita, Kumamoto and Kagoshima. Ferries from Fukuoka journey to Busan in South Korea and the Japanese island of Tsushima (対馬)[4] in the Korea Strait of the Sea of Japan (日本海 Nihon-kai).[5] Reflecting Kyushu's links to Korea and China, multilingual signs throughout the island usually include Korean, and there is a strong Chinese presence, especially in Nagasaki, home of the Chinese-administered shrine Koshi-byo. 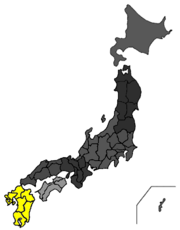 Toyotomi Hideyoshi's system of centralised feudalism (Bakuhan) came to Chikugo province in 1573. Tachibana, who had checked the northward advance of the Shimazu clan until Hideyoshi's forces arrived, was enfeoffed with four districts of Chikugo in 1574 as a reward. Hideyoshi supplied considerable support to Tachibana whose power base was initially unstable. Tachibana reciprocated by remaining loyal to Hideyoshi up through the battle of Sekigahara in 1600, participating in the two expeditions to Korea in 1595 and 1598 and becoming Daimyo (lord) of all Chikugo. Tachibana's lands, however, were gradually confiscated over the next 14 years and turned over to Tanaka Yoshimasa. His regime, however, collapsed in 1621.

Industrialisation began in the 1860s, with the building of the first cotton textile factory in Kagoshima in 1867.

One of the biggest battles in world history was planned for Kyushu, with the scheduled American invasion in November, 1945 named "Operation Olympic". With millions of soldiers, sailors and airmen on both sides getting ready, it never happened because Japan surrendered in August.

Thanks to good transport and communications, land availability, local government policy, and labour supply, Kyushu emerged in the 1970s as a major regional concentration of memory chip assembly. In Kumamoto prefecture alone there were 10 of these plants by 1980, the leader of which is Nippon Electric. Using young women as skilled labour, and a highly developed quality control system, the industry became world famous. The research and design work, however, is done in Tokyo.