South Korea, officially the Republic of Korea or ROK (Korean: Namhan; Daehan Min-guk[1][2]), is a constitutional republic comprising the southern part of Korea, which protrudes southward from the Northeastern Asian mainland and lies between the Yellow Sea and the East Sea. It is historically and culturally related to its East Asian neighbors including China, Taiwan, and Japan. When South Korea was established in 1948 after the end of Japanese colonial rule, the country was one of the poorest in the world, and its economic prospect worsened with destruction of the nation's infrastructure during the Korean War from 1950 to 1953. However, during the the early 1960s and the two decades that followed, South Korea transformed its largely agricultural economy into a modern industrial power and has currently the 15th largest GDP. South Korea's capital is Seoul, one of the world's 10 largest cities[3] and a major technological and financial hub in the region. The country's current president is Park Geunhye, who assumed office in February 2013. 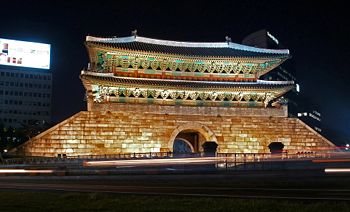 (CC) Photo: Sam Garza
The Namdaemun Gate in Seoul, a World Heritage site designated by UNESCO, was destroyed by arson in 2008.

South Korea covers a total of 99,268 km2 (38,328 mi2) over eight mainland provinces, the Jeju Island, and approximately 3,000 smaller islands appearing almost entirely on the western side of the peninsula. By comparison, the country is slightly larger than the U.S. state of Indiana and is about 4/5th the size of North Korea.

South Korea is largely mountainous, with only 30% of its terrain being the lowlands, concentrated mostly on the western and the southeastern parts of the country.[4] Along the curve of the eastern coastline, the Taebaek Mountains, the northern end of which originates in North Korea, run in the north-south direction.[5] Four smaller mountain ranges branch off south-westward from the Tabaek Mountains, and the largest among them, the Sobaek range, makes a long S-shape that divides the southern region. The highest points of these are Mount Jiri in the Sobaek Mountains, reaching a height of 1,915 m (6,283 ft), and Mount Sorak in the Taebaek range, peaking at 1,708 m (5,604 ft), but none are as high as Mount Halla, which is an extinct volcano with a height of 1,950 m (6,398 ft). It is located on the southern island of Jejudo, which is the country's largest island.

The three major rivers in South Korea are the Han, Geum, and Nakdong, all of which originate from the Taebaek range. The Han River is where the capital is situated, and it is the second largest in South Korea. The Han and Geum rivers drain into the Yellow Sea, and the Nakdong River, the longest river in South Korea, empties south into the Korea Strait. Similarly, most of the other fluvial channels in the country also run westward into or southward into the two seas. 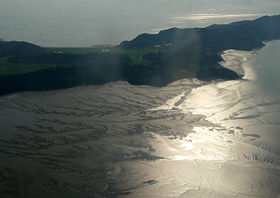 The country's coastline extends 2,413 km (approximately 1,500 mi)[6]. The southern and western coasts differ greatly from the rockier eastern coast in that they are arranged intricately with harbors and islands, whereas the eastern coastline is smooth and simple.[4] Likewise, the tidal ranges vary significantly; on the east side, tides reach only 0.3 m, but the tidal range increases gradually along the south coast and peaks at 910 m (one of the world's highest) in the Gyeonggi Bay in the northwest. Because the western and southern coasts also are relatively flat, extensive and wide tidal flats have formed in these parts from the sediments dumped by the Korean rivers and the Yellow and Yangtze rivers in China. Mud and silt are typical of the tidal flats in the north, in contrast to the sandier texture of the mudflats in the southwest.[7] 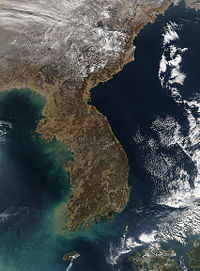 (PD) Image: NASA
A satellite image of the Korean peninsula.

The soil, about two-thirds of which formed in the Cenozoic Era, is made up mostly of gneiss and granite. The predominant soil type is brown, but there are regional variations. Red and yellow soils are other major types that are common in the southwest; dark red and grayish brown (podzolic) are found in the southeastern parts of the country. Due to the extreme summer-winter temperatures and the heavy downpour during the summer monsoon season, the soil is well-leached with very little humus content, and it is quite susceptible to erosion.[8][9]

Unlike Japan or the northern provinces of China, the Korean peninsula is geologically stable.[10] There have been no major earthquakes in Korea, and the last volcanic activity on Mount Halla was recorded during the Goryeo Dynasty (also spelled as "Koryo"), from which Korea's modern English name originates. The other group of volcanic islands in the East Sea, Ulleungdo and Dokdo (Liancourt Rocks), were active 2.5 and 4.6 million years ago, respectively.[11] 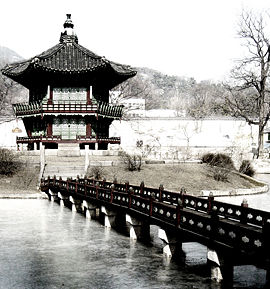 (CC) Photo: Devid Andriyano
A photograph of the Gyeongbok Palace in November.

South Korea has a temperate continental climate with four distinct seasons. Its summers are very hot and humid, and its winters very cold and dry, due to the combined influences of the Asian mainland and the the northeast Asian wind system. During winter, the dry Arctic air is brought in by the Asian monsoon, which reverses direction and carries the hot, humid air from the South China Sea during the rainy summer. Spring and autumn are pleasant but short.

The warmest month in South Korea is August, which has an average temperature of 25 °C (77 °F). In contrast to the relatively unvarying distribution of heat during summer, there is a noticeable difference in temperature between the northern and southern parts of the country in winter. For example, in the coldest month, January, the average temperature ranges from -5 °C (23 °F) in Seoul to 2 °C (35 °F) in the southern port city of Busan.

On the mainland, the annual precipitation ranges from about 900 to 1,500 mm (35 to 60 in), much of which occurs during the summer as typhoons and heavy rains. Flooding occurs in some parts of the country due to the increased precipitation and river flow. In the very southern parts of the country, however, rainfall tends to be more consistent throughout the year. In Jeju Island, the annual precipitation is around 1,800 mm  (70 in). Two or three typhoons are expected annually, though Korea's typhoons tend to have less impact than those in neighboring countries such as Japan, Taiwan, and eastern China.[4][5][12][13][14] 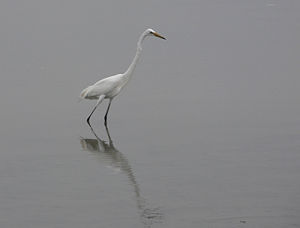 The country's rapid industrialization and high population density have taken a severe toll on the environment. The traditional use of wood as a fuel and building material has gradually led to the clearing of much of the old-growth forests throughout the past centuries. Although today South Korea's temperate forests cover about 65% of the land largely due to the extensive reforestation efforts since the 1970s, the natural ecosystem is small and fragile due to its close proximity to human activities.[15] The 4% of the land that is protected as nature reserves is visited annually by millions seeking refuge from the urban areas, and conservation efforts by the government continue to be insufficient in terms of both size and scientific approach.[16]

The country's forests contain some 4,500 species of plants and can be categorized into two types: the Central Korean deciduous forests and the Southern Korea evergreen forests. The Central Korean deciduous forests occupy the northern two-thirds of South Korea (and also much of North Korea) and consist mostly of hardwood trees such as maples, oaks, and hornbeams. A smaller population of conifers is found in areas that are especially cold or have been recently disturbed.[5][17][18]

Due to loss of forest habitat, and overhunting, the once-abundant large mammals such as tigers, bears, and lynx