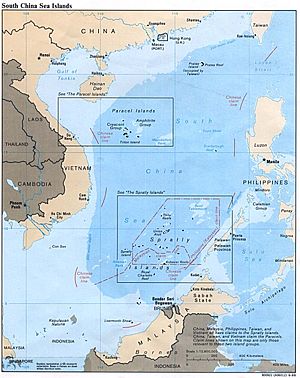 The South China Sea and its Islands

The South China Sea is a part of the Pacific Ocean bordered by Singapore and the Strait of Malacca in the southwest, to the Strait of Taiwan in the northeast, and connects to the Gulf of Thailand. Nations on its coasts include Brunei, China, Indonesia, Malaysia, the Philippines, Singapore, and Vietnam.

Chinese Hainan Island is the largest land mass, but the Sea surrounds in excess of 200 small islands, rocks, and reefs, with the majority located in the Paracel and Spratly Islands chains. The small islands are important, however, for political and economic reasons, such as offshore petroleum resources.

In 2002, the Association of South East Asian States (ASEAN) and the People's Republic of China adopted the Declaration on the Conduct of Parties in the South China Sea, which agrees to the principles of freedom of sea and air navigation, while recognizing there are sovereignty and resource disputes. [1] Basic principles to guide conduct include:

and other principles of generally accepted international law. The latter two are ASEAN agreements.

In March 2005, the national oil companies of China, the Philippines, and Vietnam signed a joint accord to conduct marine seismic activities in the Spratly Islands Work toward a more binding code of conduct will continue, but, until then, the parties agree to:

Cooperative efforts can deal with

The Paracels have more economic and strategic activity than the Spratly chain, which are claimed by both China and Vietnam. They include productive commercial fisheries and, and there are likely petroleum reservess. [2]

In 1932, French Indochina annexed the islands and set up a weather station on Pattle Island; maintenance was continued by its successor, Vietnam.

China has occupied the Paracel Islands since 1974, when its troops seized a South Vietnamese garrison occupying the western islands. China built a military installation on Mischief Reef in 1999.