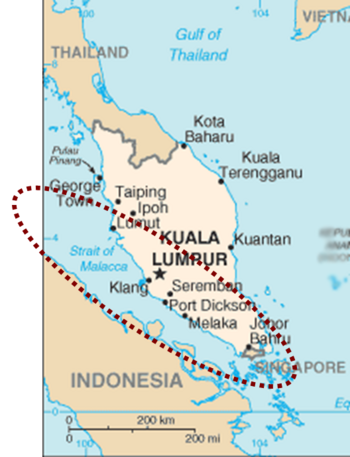 Western Malaysia and the Strait of Malacca

Connecting the Andaman Sea of the Indian Ocean and the South China Sea, the Strait of Malacca (also Straits of Malacca) continues a long tradition of being a bastion of piracy. International action, principally by Indonesia, Malaysia and Singapore, with later involvement by Thailand, began, in 2004, to reduce the still-significant pirate threat. [1] As a reminder for the situation off Somalia, seapower alone did not solve the problem; it was necessary to provide political and economic alternatives to the pirates.[2]

The situation remains under the close monitoring of the Association of Southeast Asian Nations (ASEAN) and the wider ASEAN Regional Forum (ARF), focused on security.

While it traverses the waters of many countries, it is only 1.7 nmi wide at its narrowest part. If the strait were blocked, nearly half of the world's fleet, 50,000 vessels yearly, would be required to reroute around the Indonesian archipelago through Lombok Strait, located between the islands of Bali and Lombok, or the Sunda Strait, located between Java and Sumatra.

To stabilize the situation for oil, Malaysian, Indonesian and Saudi companies signed a contract in 2007 to build a $7 billion pipeline across the north of Malaysia and southern border of Thailand to reduce 20 percent of tanker traffic through the Strait of Malacca.[3]