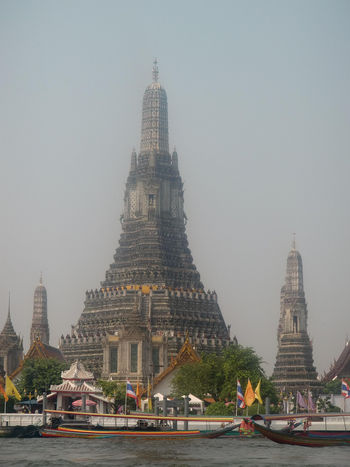 Thailand is a country of approximately 67 million people in Southeast Asia, with a revered but largely ceremonial monarchy, which has gone back and forth between democracy and military rule. Its capital is Bangkok. It is a member of the Association of Southeast Asian Nations (ASEAN), and had excellent economic growth until 2004. It has considerable infrastructure, a free-enterprise economy, and attracts foreign investment; it showed a 6% real growth rate in 2002-2004.

The monarchy was created in the mid-14th century. Known as Siam until 1939, Thailand is the only Southeast Asian country never to have been taken over by a European power; it managed a delicate balance with the French in Indochina. A bloodless revolution in 1932 led to a constitutional monarchy.

While it never was dominated by a European power, the relationship with Japan, in the Second World War, was complex. While they were officially allies, Japan clearly dominated.

Thailand became a U.S. ally following the Second World War. During the Vietnam War, it hosted large U.S. air bases, supporting Operation ROLLING THUNDER activity against North Vietnam, as well as operations against the Ho Chi Minh trail in Laos and Cambodia. The main intelligence center that processed remote sensors from the Trail was at Nakhom Phanom.

In September 2006, the Thai military overthrew then-Prime Minister Thaksin Shinawatra, but held elections in December 2007. A pro-Thaksin coalition resulted. In March 2008, the anti-Thaksin People's Alliance for Democracy (PAD, commonly known as 'Yellow Shirts') demonstrated against the coalition and took over the Prime Minister's office.

PAD occupations intensified in October 2008, with some deaths; the PAD eventually occupied Bangkok's main airport, leaving when a December 2008 court decision dissolved the coalition. The Democrat Party then formed a new coalition government with the support of some of Thaksin's former political allies.

2010 saw new protests by the 'Red Shirt' political movement that opposed the original coup; dozens of deaths resulted. In July 2011, the general election brought the Pheu Thai Party headed by Yingluck Shinawatra, sister of Thaksin Shinawatra, to power. In 2012, charges were brought against PAD leaders for their alleged roles in the events of 2008.[1]

In May 2014, a Constitutional Court removed Yingluck Shinawatra from office, having found her guilty of an abuse of power. Later that month, a military coup brought the National Council for Peace and Order to power.

There has been a significant amount of separatism in the south, with major violence involving Malay nationalist and Islamist groups.

The economy has a large tourism component, recently providing excellent healthcare facilities catering to foreign nationals. It is well-known for its textiles and garments. From a mineral standpoint, it is the world's second-largest producer of tungsten and third-largest of tin. The manufacturing sector grows increasingly more complex, including domestic production of integrated circuits as well as electronic assembly.

Economic growth dropped to an average 4.9% from 2005 to 2007, as persistent political crises interfered with infrastructure development, and confidence from investors and consumers fell.