Battle of the Coral Sea

The first battle between forces led by aircraft carriers, in which the ships never saw one another, the Battle of the Coral Sea took place on 7-8 May 1942, in the waters southwest of the Solomon Islands and eastward from New Guinea. While the U.S. Navy lost more tonnage than the Imperial Japanese Navy, the battle is considered a strategic victory for the U.S., because it caused, for the first time, a Japanese invasion fleet to turn back.

U,S. communications intelligence revealed an imminent attack against Port Moresby, New Guinea. If Port Moresby fell, it would give Japan control of the seas to the immediate north of Australia. Nimitz rushed the carrier USS Lexington (CV-2), under Admiral Frank Fletcher, to join USS Yorktown (CV-5) and a U.S.-Australian task force, with orders to contest the Japanese advance.

Operation MO, under the command of VADM Shigeyoshi Inoue, planned amphibious landings on Tulagi and Port Moresby.[1] A second strategic effect was reducing the Japanese resources available for the Battle of Midway, approximately a month later. [2] 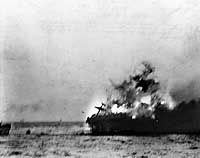 Close-in Japanese airpower would be provided by land-based airpower from bases to the north and by two naval forces containing a small aircraft carrier, IJN Shoho, several cruisers, seaplane tenders and gunboats. More distant cover would be provided by the fleet containing the aircraft carriers IJN Shokaku and IJN Zuikaku and escorts. VADM Takeo Tagaki was in overall command; RADM Tadaichi Hara commanded the large carriers.[1]

The two sides lost approximately the same number of aircraft (75 American, 74 Japanese), with a good many lost when carriers sunk. While it was only the beginning, however, pilot losses were more significant. Japan had started the war with excellent naval aviators, but they had no effective system for replacing pilots, while the U.S. had a rotation system that produced new pilots almost as quickly as airplanes.

Shokaku was seriously damaged, and, while Zuikaku was not heavily hit, she had to spend six weeks obtaining new aircraft and pilots. Neither were able to participate in the Battle of Midway. Midway, usually considered the turning point of the Pacific War, was a very close battle; had the six carriers of the Mobile Striking Fleet that were at the Battle of Pearl Harbor were present, rather than the four that were used, the outcome could have been very different. [4]

The U.S. lost the Lexington, the destroyer USS Sims, and the fleet oiler USS Neosho. Yorktown was damaged and expected to be out of service for three months, but unprecedented repair activity at Pearl Harbor sent her back out to sea in three days, some shipyard workers still aboard, to the Battle of Midway. She sank during that battle, but not before playing an important part in the victory.