The history of Japan, the large island nation off the coast of China and Korea, is comprised of mainly three stages: the periods of interaction with China and East Asia, isolation, and opening to the world.

Japan was inhabited since more than 30,000 years ago, when land bridges connected Japan to Korea and China to the south and Siberia to the north. With rise in sea level, the 4 major islands took form around 20,000 years ago, and the lands connecting today's Japan to the continental Asia completely disappeared 15,000 ~ 10,000 years ago. Thereafter, some migrations continued by way of the Korean peninsula, which would serve as Japan's main avenue for cultural exchange with the continental Asia until the medieval period.

The mythology of ancient Japan is contained within the Kojiki ('Records of Ancient Matters') which record the creation myth of Japan and its lineage of Emperors to the Sun Goddess Amaratsu. Large portions of this book are Chinese mythology and the distinction of what is truly Japanese and what is Chinese is continually questioned.

In the myth of Japan's creation the two gods Isanagi and Isanami swirled the primordial soup below the bridge of heaven with a rod and when retrieving the rod the drops of liquid that formed and dropped created the first islands of Japan.

Ancient pottery has been uncovered in Japan, particularly in Kyushu, that points to two major periods: the Jomon (c.7,500 BC - 250 BC, 縄文時代 Joomon Jidai ) and the Yayoi (c.250 BC - 250 AD, 弥生時代 Yayoi Jidai). Joomon can be translated as 'cord marks' and refers to the pattern on the pottery of the time; this style was more ornate than the later Yayoi type, which has been found at more widespread sites (e.g. around Tokyo) and seems to have been developed for more practical purposes. 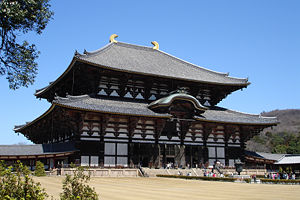 Vassalage and of great military houses

In 1603, the Tokugawa shogunate (military dictatorship) ushered in a long period of isolation from foreign influence in order to secure its power. For 250 years this policy enabled Japan to enjoy stability and a flowering of its indigenous culture.

Japanese society had an elaborate social structure, in which everyone knew their place and level of prestige. At the top were the emperor and the court nobility, invincible in prestige but weak in power. Next came the "bushi" of shogun, daimyo and layers of feudal lords whose rank was indicated by their closeness to the Tokugawa. They had power. The "daimyo" comprised about 250 local lords of local "han" with annual outputs of 50,000 or more bushels of rice. The upper strata was much given to elaborate and expensive rituals, including elegant architecture, landscaped gardens, nō drama, patronage of the arts, and the tea ceremony.

Then came the 400,000 warriors, called "samurai", in numerous grades and degrees. A few upper samurai were eligible for high office; most were foot soldiers (ashigaru) with minor duties. The samurai were affiliated with senior lords in a well-established chain of command. The shogun had 17,000 samurai retainers; the daimyo each had hundreds. Most lived in modest homes near their lord's headquarters, and lived off of hereditary rights and stipends. Together these high status groups comprised Japan's ruling class making up about 6% of the total population.

Lower orders divided into two main segments--the peasants--80% of the population--whose high prestige as producers was undercut by their burden as the chief source of taxes. They were illiterate and lived in villages controlled by appointed officials who kept the peace and collected taxes.

Near the bottom of the prestige scale--but much higher up in terms of income and life style--were the merchants and artisans of the towns and cities. They had no political power, and even rich merchants found it difficult to rise in the world in a society in which place and standing were fixed at birth. Finally came the entertainers, prostitutes, day laborers and servants, and the thieves, beggars and hereditary outcasts.[1]

The Tokugawa era brought peace, and that brought prosperity to a nation of 31 million, 80% of them rice farmers. Rice production increased steadily, but population remained stable. Rice paddies grew from 1.6 million chō in 1600 to 3 million by 1720.[2] Improved technology helped farmers control the all-important flow of water to their paddies. The daimyo's operated several hundred castle towns, which became loci of domestic trade. Large-scale rice markets developed, centered on Edo and Osaka. Merchants invented credit instruments to transfer money, and currency came into common use. In the cities and towns, guilds of merchants and artisans met the growing demand for goods and services.[3]

The merchants benefited enormously, especially those with official patronage. The samurai, forbidden to engage in farming or business but allowed to borrow money, borrowed too much. The bakufu and daimyos raised taxes on farmers, but did not tax business, so they too fell into debt. By 1750 rising taxes incited peasant unrest and even revolt. The nation had to deal somehow with samurai impoverishment and treasury deficits. The financial troubles of the samurai undermined their loyalties to the system, and the empty treasury threaten the whole system of government. One solution was reactionary--with prohibitions on spending for luxuries. Other solutions were modernizing, with the goal of increasing agrarian productivity. The eighth Tokugawa shogun, Yoshimune (in office 1716-1745) had considerable success, though much of his work had to be done again between 1787 and 1793 by the shogun's chief councilor Matsudaira Sadanobu (1759-1829). Others shoguns debased the coinage to pay debts, which caused inflation.

By 1800 the commercialization of the economy grew rapidly, bringing more and more remote villages into the national economy. Rich farmers appeared who switched from rice to high-profit commercial crops and engaged in local money-lending, trade, and small-scale manufacturing. Some wealthy merchants sought higher social status by using money to marry into the samurai class.

A few domains, notably Chōsū and Satsuma, used innovative methods to restore their finances, but most sunk further into debt. The financial crisis provoked a reactionary solution near the end of the "Tempo era" (1830-1843) promulgated by the chief counselor Mizuno Tadakuni. He raised taxes, denounced luxuries and tried to impede the growth of business; he failed and it appeared to many that the continued existence of the entire Tokugawa system was in jeopardy.[4]

Edo (Tokyo) had been a small settlement for 400 years but began to grow rapidly after 1603 when Shogun Ieyasu built a fortified city as the administrative center of the new Tokugawa Shogunate. Edo resembled the capital cities of Europe with military, political, and economic functions. The Tokugawa political system rested on both feudal and bureaucratic controls, so that Edo lacked a unitary administration. The typical urban social order was composed of samurai, unskilled workers and servants, artisans, and businessmen. The artisans and businessmen were organized in officially sanctioned guilds; their numbers grew rapidly as Tokyo grew and became a national trading center. Businessmen were excluded from government office, and in response they they created their own subculture of entertainment, making Edo a cultural as well as a political and economic center. With the Meiji Restoration, Tokyo's political, economic, and cultural functions simply continued as the new capital of imperial Japan.

Three distinct cultural traditions operated during the Tokugawa era, having little to do with each other. In the villages the peasants had their own rituals and localistic traditions. In the high society of the imperial court, daimyos and samurai, Chinese cultural influence was paramount, especially in the areas of ethics and political ideals. Neo-Confucianism became the approved philosophy, and was taught in official schools; Confucian norms regarding personal duty and family honor became deeply implanted in elite thought. Equally pervasive was the Chinese influence in painting, decorative arts and history, economics, and natural science. One exception came in religion, where there was a revival of Shinto, which had originated in Japan. Motoori Norinaga (1730-1801) freed Shinto from centuries of Buddhist accretions and gave a new emphasis to the myth of imperial divine descent, which later became a political tool for imperialist conquest until it was destroyed in 1945.

The third cultural level was the popular art of the low-status artisans, merchants and entertainers, especially in Edo and other cities. It revolved around "ukiyo", the floating world of the city pleasure quarters and theaters that was officially off-limits to samurai. Its actors and courtesans were favorite subjects of the woodblock color prints that reached high levels of technical and artistic achievement in the 18th century. They also appeared in the novels and short stories of popular prose writers of the age like Ihara Saikaku (1642-1693). The theater itself, both in the puppet drama and the newer kabuki, as written by the greatest dramatist, Chikamatsu Monzaemon (1653-1724), relied on the clash between duty and inclination in the context of revenge and love.

Following the Treaty of Kanagawa with the United States of America in 1854, Japan opened its ports and began to intensively modernise and industrialise.

The Meiji Restoration of 1868 ended the Tokugawa period, and put Japan on a course of centralized government in the name of the Emperor.

During the late nineteenth and early twentieth century, Japan became a regional power that was able to defeat the forces of both China and Russia. It occupied Korea, Formosa (Taiwan), and southern Sakhalin Island.

For more information, see: World War Two in the Pacific.

In 1931 Japan occupied Manchuria ("Dongbei") after the Manchurian Incident, and in 1937 it launched a full-scale invasion of China. The U.S. undertook large scale military and economic aid to China and demanded Japanese withdrawal. Instead of withdrawing Japan took over French Indochina in 1940-41; the U.S., Britain and the Netherlands cut off oil imports in 1941, which accounted for over 90% of Japan's oil supply. Negotiations with the US led nowhere. Japan attacked U.S. forces at the Battle of Pearl Harbor in December 1941, triggering America's entry into World War II. Japan rapidly expanded at sea and land, capturing Singapore and the Philippines in early 1942, and threatening India and Australia.

Although it was to be a long and bloody war, Japan began to lose the initiative in 1942. At the Battle of the Coral Sea, a Japanese offensive was turned back, for the first time, at sea. The June Battle of Midway cost Japan four of its six large aircraft carriers and destroyed its capability for future major offensives. In the Guadalcanal Campaign, the U.S. took back ground from Japan and established a base for future invasions.

After its defeat in World War II, Japan was occupied by the U.S. until 1951, and recovered from the effects of the war to become an economic power, staunch American ally and a democracy. While Emperor Hirohito was allowed to retain his throne as a symbol of national unity, actual power rests in networks of powerful politicians, bureaucrats, and business executives.

The economy experienced a major slowdown starting in the 1990s following three decades of unprecedented growth, but Japan still remains a major economic power, both in Asia and globally.

For a much more detailed guide, see the Bibliography subpage on top line.