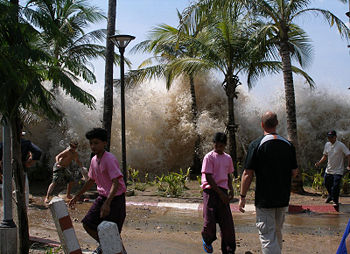 In 2004 a huge tsunami struck various coastal regions of the Indian Ocean, including this part of Thailand.

Tsunami is a giant wave or wall of water, sometimes several stories tall, that causes tremendous destruction when it rolls in on a beach or low-lying areas or small islands. It is caused by undersea earthquakes, particularly when a large slab or earth moves upwards according to the logic of plate tectonics[1]. They are rare, but when they happen, can be very deadly. A tsunami in 2004 killed over a hundred thousand people in diverse locations in countries around the Indian Ocean [2]. A Tsunami and earthquake that struck Japan in 2011 resulted in a death toll of 9,079, with 12,645 missing, and a major setback to the Japanese economy[3].