A geta (下駄) is a kind of Japanese shoe with a flat wooden sole (台 dai 'stand') raised by one or more 'teeth' (歯 ha). The foot holds the geta between the toes via a V-shaped length of fabric (鼻緒, hanao). They are often worn to accompany Japanese robes such as a kimono or a yukata, particularly in summer, sometimes with traditional ankle-high toe socks called tabi (足袋). Both men and women as well as children may wear geta, with the design slightly adapted for age and sex. 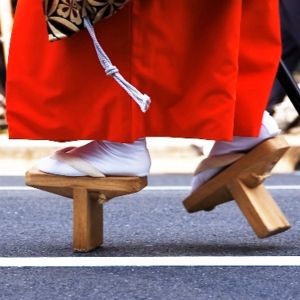 Traditional tengu-geta shoes can be seen at festivals.
Photo © by Sonny Santos, used by permission.

Wearing geta obviously make reaching a speedy pace rather difficult; this is even more so with tengu-geta (天狗下駄),[1] which have only one 'tooth'; these can resemble miniature stilts. Raised geta may also act to keep the feet clean and dry, and tengu-geta are sometimes used in mountain climbing.

When choosing geta, the Japanese may consider that the wooden dai should be slightly smaller the wearer's overall footprint; they will also tell you that wearing geta avoids flat feet and various other problems.[2]

Geta are easy to slip on and off; this is important in Japan, where shoes are generally removed on entering a home, and are forbidden on tatami (畳) mats. The city of Kaminoyama (上山) in Yamagata prefecture (山形県 Yamagata-ken) has an annual geta-flicking contest (げた飛ばし大会 Geta Tobashi Taikai) in which competitors try to throw geta the furthest with a flick of the foot. Outdoors, they make a distinctive 'clacking' sound on hard surfaces unless rubber padding is fixed to the bottom of the 'teeth'; this sound is such a part of Japanese culture that an onomatopoeic word exists in Japanese to describe it: karankoron (カランコロン). In some cases, wearers may even use strips of old bicycle tyres to soften karankoron.