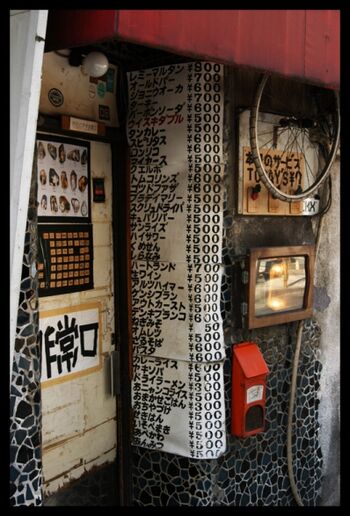 This bar menu in Shinjuku, Tokyo, lists food and drink in both angular katakana - for loanwords or to make signs easier to read - and the curvy hiragana script - for native vocabulary. Top of the list, in katakana, is レミーマルタン - Remii Marutan 'Remy Martin' brandy; bottom, in hiragana, is あんみつ anmitsu - a jelly to finish a meal. The sign on the door (非常口 Hijoo Guchi 'fire exit') is written in kanji, or Chinese-derived characters.
Photo © by Sonny Santos, used by permission.

Japanese (日本語, Nihongo), the main language of Japan and the native tongue of at least 127 million people, is notable for: a complex system of honorific language which allows speakers to express and indicate their social status relative to one another; a writing system which uniquely employs a combination of three or four different scripts for different purposes; its disputed relatedness to other languages around the world; and a sound structure known as pitch accent in which the pitch of the voice alone may distinguish different words. Nowadays spoken by emigrant communities worldwide, but only widely standardised in the last century or so, Japanese is also a set of highly divergent dialects spoken across the Japanese archipelago which often bear scant resemblance to one another; likewise, the other Japonic languages of which it forms one branch are also highly distinct. Japanese literature goes back to the eighth century, while today the language continues to absorb large amounts of loanwords, previously from Chinese and today more commonly from English.

Grammatically, Japanese is an agglutinative language - grammatical units link together in long 'strings' to make words. For example, 食べたくなかった tabetakunakatta[1] 'did not want to eat' is composed of the morphemes tabe- 'eat', -ta- 'want', -ku- 'adverb',[2] -na- 'negative', and -kat- and -ta - both signifying that the action is complete, i.e. in the past.[3] Phonologically, its 'sounds' consist mainly of consonant-vowel units that cannot be split up, such as bu, ni and ka, which are written as single symbols, in these cases ぶ, に and か in hiragana and ブ, ニ and カ in katakana.

Japanese is written using a combination of three different scripts. Chinese-derived characters (漢字 kanji) are used for the most meaningful words such as most nouns and verbs; these take some time to learn. Two further kana scripts, hiragana (ひらがな) and katakana (カタカナ) write moras, equivalent to but not the same as syllables, and to a degree can indicate pronunciation. The Roman alphabet, roomaji (ローマ字), is also often used in modern Japanese. Numbers are usually written with Arabic numerals, as in many countries, but kanji are also used for numbers, especially in traditional contexts.

Kanji are derived from the ancient Chinese characters today known as 'Traditional Chinese'; the Japanese mildly simplified the written strokes of some of the characters.[4] The grammars of Japanese and Chinese are completely different, so in pre-modern times the Japanese originally wrote in ancient Chinese but eventually wanted a writing system that related to the spoken language. The Japanese used the cursive form of some common Chinese characters to create the two moraic kana systems, hiragana and katakana, which indicate pronunciation only. Over the centuries, these systems, which early on were often used alone (e.g. men using kanji and women writing exclusively in kana), merged into the present system. Kanji are used for most vocabulary; hiragana are used for grammatical elements and vocabulary that lack kanji or that have difficult kanji known to few readers; and katakana are used mostly for foreign loanwords and some words that have very difficult kanji, or that the writer wants to emotionally emphasise in some manner. The root of a verb will typically be rendered with a kanji, while the agglutinative verb endings are written in kana: 飲む nomu '[to] drink', for example, has the root nom- written as a kanji 飲 [no] and part of the hiragana symbol む [mɯ]. Morphological boundaries, then, do not always align with symbols. Extremely rarely, the stem of a verb is written in katakana due to its foreign origin; for example, サボる saboru ('to be truant'), which is from the French sabotage.