From Citizendium
(Redirected from Word)
Jump to: navigation, search

This article is about the unit of language. For other uses of the term Word, please see Word (disambiguation).

A word is a unit of language which exists in contrast to other forms such as phrases and sentences, and which language users intuitively recognised as such. However, an exact definition of 'word' is difficult since it depends on what aspect of language, and indeed what specific languages, are being discussed.

In normal discourse, a word is regarded as a meaningful unit of language, but this definition does not account for disagreements about what is a word and what is not (e.g. whether table and tables are one word or two, or whether the is a word in the same way that table is a word). It also ignores nonsense words ("all mimsy were the borogroves") that have no meaning, and the observation that language learners can recognise words as words even though they have yet to learn their meanings. Words may also appear to be more psychologically real than other units depending on cultural or educational background: for example, people who are literate in a writing system which demarcates units of language by spacing (e.g. most alphabets) may more readily identify such units as words. Compare flowerpot and flower pot, where the presence of a space seems to confer word status on each of the two elements, even though any difference in meaning is negligible and the sounds blend into one another in the speech stream.

Despite these problems, for many language users there is initially little doubt as to what constitutes a word: cat is a word, and it does not become two words by adding the plural -s; whereas the cat is certainly two words, making a phrase. In other languages, such as Swedish, the cat can be expressed as a single word by the application of an inflectional ending: kat and the definite marker -en combine to form katten. Other cases are more difficult: for example, there might be some confusion over whether fridge-freezer is one word or two.

Because of the ambiguity of what counts as a 'word', linguists often employ the term lexeme to refer to a 'minimally distinctive', abstract unit in language, and reserve 'word' as a more general term. For example, eat, ate, eaten, eats and eating are all different words, but also variants of a single lexeme.[1] 'Minimally distinctive' might mean, as the linguist Leonard Bloomfield argued, that the unit can stand alone as an utterance in its own right, forming a single-word sentence (e.g. Eat!); or at least that native speakers somehow come to the intuition that such units are distinct from other units of language. Such attempts at a definition of 'word' are problematic, as they do not account for exceptions such as the and a, for which it is difficult to come up with acceptable contexts for these as single-word sentences; and they do not really explain what a word is in a satisfactory manner. Then again, linguists may also point out that language itself has so far eluded a satisfactory, explicit description of how it really works.

Other definitions of 'word' involve the degree to which one can acceptably modify or distort the structure of the unit in question: if it remains 'cohesive', or its 'constituent' parts do not readily allow rearrangement, then the unit could be a word. For example, unlike the units in a sentence such as He ate the cake, the morphemes in antidisestablishmentarianism cannot be rearranged. Of course, this does not help when a single word is also a single morpheme, such as cat, and 'cohesion' in particular does not explain examples of infixation such as Abso-blinking-lutely![2]

The 'word' in different fields of linguistics

'Word' can also mean different things depending on what aspect of language is examined. For example, in phonology (the study of the abstract units used to represent language, such as /k/ in cat), a phonological word may not be the same unit as a word in syntax, the study of how such units combine into larger structures such as sentences. Syntax also identifies units which are in some ways like words and in other respects more like inflections: clitics such as 've in I've, for example, popularly known in English as 'contractions', are phonologically dependent on other units (i.e. because they cannot stand separately from them: Have I? is possible but *'Ve I?[3] is not) but syntactically occupy the position of a full word, e.g. have.[4] In writing, units of language are often separated in a way that does not reflect the facts of phonetics; for example, English uses spacing to break up sequences of letters even though there are rarely physical pauses in running speech. A 'word', then, may be identified on phonological, orthographic, syntactic or semantic grounds.

'Word' as an indefinable word

That dilemma would not arise if the language contained a subset of words whose meanings users of the language had a propensity to understand innately, without reference to other words, learning their meanings from the way the members of their community use them. For a child learning to speak the language, the word 'me', for example, would need no words to describe its meaning, as the child would learn its meaning from the examples of its use given by her caregivers, particularly if evolutionary processes had endowed her with an innate propensity to acquire 'me' as a meaningful but lexicographically indefinable primitive word and concept.

Linguists interested especially in the meanings of words — semanticists — have proposed that English has a subset of approximately 60 such so-called semantic primitives, or semantic primes, each an indefinable word representing 60 fundamental concepts intuitively meaningful, together able to serve as the 'starter' words, the basic set of words of socio-culturally learned meaning used for describing the meaning, without circularity, all of the other words and their associated conceptual denotations in the language. [5]  [6]

Those semanticists include the word 'word' among that subset of semantic primes, basing that inclusion on detailed observation and logical argument, noting that, like all the semantic primes, every language has a word for 'word', suggesting the universality of the concept embedded in 'word'. Not surprisingly, linguists find it difficult to 'define' the word 'word'.

ALL PEOPLE KNOW ALL WORDS BELOW BECAUSE ALL PEOPLE HEARD THE SAME WORDS SPOKEN A LONG TIME:[7] 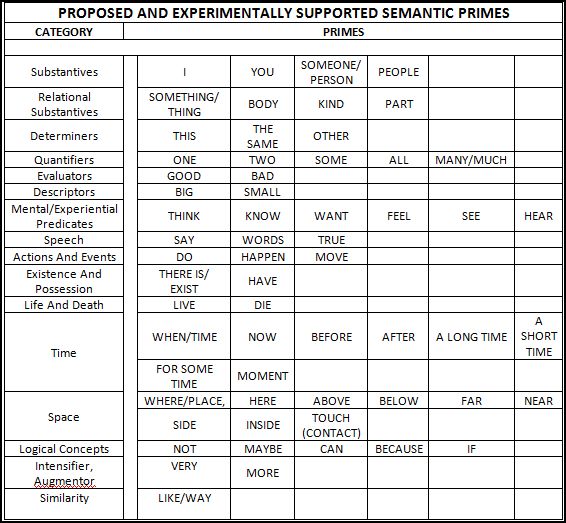 On reflexivity in words

Some words seem to call attention to themselves, not because of their rarity in usage, their novelty, their particular aptness as used in a sentence, and other such properties, but because of their property of reflexivity, or self-reference. The word 'noun' certainly refers to nouns, but as itself qualifies as a noun, it references itself at the same time. 'Useful', admittedly a useful word in the English lexicon, proclaims itself as such to anyone hearing or reading it not as used in a sentence but as a word with properties other those properties of standard grammar, syntax, or semantics.

Dave Silverman coined "autological" for words that aptly describe themselves.[9] Some of his examples: 'polysyllabic', 'sesquipedalian', 'terse', 'sibilant'. Howard Bergerson, in the same issue as Silverman's article, offered the nouns 'concept' and 'tool'.