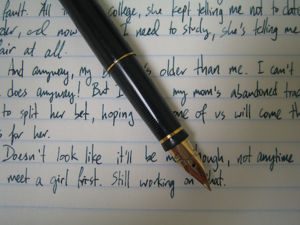 There are two common meanings of the term writing system: it may refer to how a set of signs is used to represent language, or it can mean a set of symbols and rules used to write a particular language, such as conventions of spelling and punctuation. The study of writing systems has increased in recent years within linguistics as researchers become more interested in how language acquisition and literacy are related, how people process written language and how computers model or implement writing systems.[1]

Writing system as a type of writing

The first definition of 'writing system' simply refers to the way that written or tactile signs relate to language (either spoken or signed language - sign languages can also be written using specially-designed symbols).[2] These signs could be written, etched, or in other ways shape writing material to allow reading (e.g. Braille is read through touch). Very generally, a system might represent 'sounds' in a very abstract way (a phonemic system), or its symbols may directly represent words, and thus involve meaning (i.e. logographic, such as some Chinese characters). Linguists can also divide the world's written languages into several more detailed types: (morpho)phonemic writing systems such as the Roman alphabet; consonantal systems (phonemic, but which ignore vowels, such as the Arabic alphabet to a degree) ; morphemic; syllabic, or moraic (such as two of the Japanese scripts, which indicate units similar to syllables but which are not always equivalent, such as ん n). Very often, written languages mix or employ more than one of these systems, and some of them, such as morphemic writing, are not found alone. Korean employs a phonemic alphabet, but the symbols are also arranged into syllables. Semitic languages such as Arabic indicate consonants, but some vowel information is only optionally included. Most Chinese characters represent both a syllable and a morpheme, and thus the characters used to write languages such as Mandarin can be described as morphosyllabic. Overall, this first definition can be summarised as "a set of visible or tactile signs used to represent units of language in a systematic way".[3]

An alphabets are a phonemic system. Although this is commonly defined as a system that represent 'sounds', it really involve more abstract symbols that denote phonemes (significant units used to build up syllables and words): <t>,[4] for instance, usually represents the phoneme /t/ in English, and so the many ways /t/ might actually be pronounced - e.g. [t], [tʰ], [ʔ] - are covered by a single symbol.

A purely phonemic system would encode phonological information fairly faithfully, rather than maintaining the structure or combinations of symbols to convey information or relationships involving word meanings. Systems that do just that are morphophonemic. The English alphabet is a morphophonemic system, in that though its letters (or graphemes) basically represent phonemes, these often do not change even when pronunciation differs in meaningfully related words. For example, the vowels of the word photo are significantly different from the first two of photography, yet in all cases only the letter <o> is used. In the same way, if English were written purely phonemically, it would not be at all obvious at first glance that women and women are meaningfully very similar: one would have to represent the quite different phonemes, as something like wumun versus wimin, which look like they could be different words.

No truly phonetic system has been developed to write a specific language, but the International Phonetic Alphabet was created to allow the sounds of any language to be transcribed, for the purposes of linguistic research or to aid language learning.

The syllabic and moraic systems are also phonological in nature, but not phonemic because they indicate larger units than phonemes. A syllabary consists of symbols which indicate full syllables, such as in Cherokee. Syllabaries may also involve morphology: Mandarin 媽 'mother', for example, which is a syllabic symbol pronounced mā, comprises a morphological 'radical' 女 ('female') which gives a rough idea of the meaning, and a phonological 'phonetic' 馬 which indicates the syllable /mā/. Mandarin is therefore an example of a morphosyllabic writing system.

The symbols of a moraic system indicate phonological units distinct from syllables: Japanese speakers, for instance, are sensitive to such 'beats' in an utterance which do not correspond to syllables. ほん hon ('book') is one syllable, for example, but consists of two moras, so is written phonologically with two symbols: ほん. As most kana symbols also happen to be syllables - e.g. か ka き ki く ku け ke こ ko - moras and syllables overlap and mislead many speakers and learners as to the true nature of the Japanese writing system.

Writing system as specific to a particular language

The term writing system may also refer to the full set of symbols and rules used to write a particular language, e.g. the English writing system. A particular writing system belongs to one of the classes used in the other sense of the term - the English system is a morphophonemic alphabetic system, for instance - but in addition, this definition includes language-specific information, i.e. the nature of the script (the shape of the symbols) and the orthographic rules of punctuation and phoneme-symbol correspondences (i.e. what phonemes each symbol can denote).[5]

Languages may also incorporate more than one writing system type into their overall written language system - often because one is more easy to read in one context than another. Written Japanese uses four scripts: morphemic (or morphosyllabic) Chinese-derived characters (漢字 kanji), two mora-based systems (ひらがな hiragana and カタカナ katakana), and the phonemic Roman alphabet (ローマ字 roomaji). These are used for different purposes: for example, katakana is typically used for words of recent foreign origin. Orthographic rules determine which system is used.