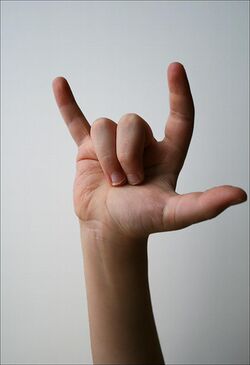 Sign language is a system of language in which expressions are conveyed using body movements rather than the human voice. Hands, arms, facial muscles and the body's orientation and movement may be used to communicate and share information - a modality as complex as any spoken language for the signers in whom it is a native or second language.

Most signers are deaf[1] or hard of hearing, though any child exposed to a sign language in their first years will acquire it, perhaps alongside a spoken language such as English. Examples of well-established individual sign languages include American Sign Language (ASL) and British Sign Language (BSL), but many more exist all over the world. Like spoken languages, they have their own dialects - for example, signs common only to certain communities - and also variations analogous to speech accent, in which the same signs may be produced in slightly different ways.

Signing is not some kind of repertoire of simple gestures that anyone can pick up almost automatically through observation; a deaf child who is not brought up with a sign language will effectively lack a native language, at least with regard to everyday interaction - though they may well be able to read and write. Many deaf people have been forced to learn to lip read, or were marginalised because they were unable to function as well as hearers. Those lucky enough to be raised with or learn a sign language find a whole new world opened to them; they are able to express their thoughts as easily as a speaker and, through translation or the learning of sign languages by hearers, step across the divide between the environments of sound and silence. 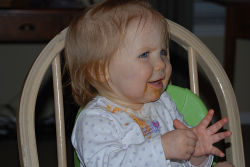 Sign language comes to children as easily as spoken language, even without regular exposure; in this case, a hearing child with non-native-signing parents is using baby sign language - a form of American Sign Language adapted for smaller hands, allowing children to communicate before being able to extensively speak. Her sign indicates that she's asking for "more". 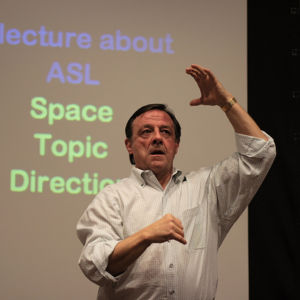 This lecture on American Sign Language is also being conducted in ASL. Today, much research on sign language comes from linguists who are themselves deaf.

Sign language is not a kind of signed English, nor an oversimplified set of gestures; the relationship betweens signs and speech is found much deeper than that. Linguists consider sign languages to be equal to spoken languages, each manifestations of the same underlying linguistic system which every human is born with. Sign language has syntax (obligatory sign arrangement) and phonology (acceptable sign formation)[2], with signs arranged in ways that are similar to spoken sentences. Linguists therefore expect similarities in the way sentences and signs are formed, and they find them in non-obvious ways - for example, the grammar of ASL has more in common with spoken Japanese than English![3]

Globally, there is little mutual intelligibility between sign languages - the fact that they all use the hands means nothing, because signs are not gestures, but linguistic symbols whose meaning is largely arbitrary and thus difficult to discover by casual exposure alone. All this leads to varying degrees of comprehension between signers of different backgrounds - whereas American and British signers will quite readily be able to read English, they will not understand many signs unless one learns the other's language. By contrast, an American in Paris may be able to communicate with French signers because ASL and French Sign Language share some signs in common.