Wood is the material in trees and shrubs produced by xylem cells, in distinction to the bark, which is produced by phloem cells, and the leaves and fruit of the tree. Wood is found in the trunk and branches of trees. Since the dawn of time, humans have used wood to make tools and implements, as a structural material for buildings and furniture, as an artistic medium, and as fuel.

Wood is composed primarily of cellulose fibers held together by lignins in a cellular structure. Wood generally grows in concentric rings with changes in texture throughout the growing season, making the rings visibly distinct, and imparting a grain to the wood. As a result of the grain structure, wood is anisotropic and inhomogenous. Wood changes thickness and width with changes in its water content, but is little affected by ambient temperature changes unrelated to ambient humidity.

The properties of wood vary with the species of tree, and with the growing conditions which the tree has experienced. Most woods are less dense than water, and will float; however, prolonged immersion will result in the cavities in the wood filling with water, and increasing the density so that the wood sinks. Lignum vitae and a few other woods are denser than water. 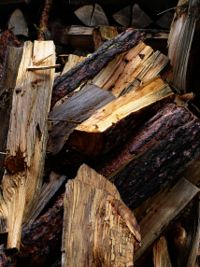 Firewood
Wood is generally flammable when dry, and burns readily, due to the air-filled voids in the wood. Some fresh woods burn easily due to resins or oils present in the wood which aid combustion, while some others burn poorly due to water present in the wood. Wood has been used as a fuel by most primitive societies, and is occasionally used by more technological societies due to the ease of containing burning wood. Wood fires are also sometimes valued for their aesthetics.

An early advance in the use of wood as fuel was the development of charcoal, which is formed by heating wood to temperatures similar to those found in wood fires, but with insufficient oxygen to burn. This causes the water in the wood to evaporate, and some of the more volatile compounds to burn off, leaving a higher-carbon material with higher porosity than the original wood. Charcoal will burn more evenly and easily than wood. The process of creating charcoal is similar to the process of coking coal.

Wood is widely used for practical and decorative arts. Until recently, most furniture was made from wood and cloth fabrics, and wood is a popular material for sculpture and other decorative pieces. Wood is easily cut and carved, and can take a wide variety of finishes, including stains, which soak into the wood and color it, and paint which covers the wood and provides a protective surface.

Wood, unlike most other sculpture materials, has a very distinctive grain which the sculptor must work with. 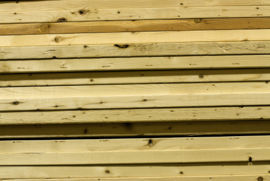 Lumber
Wood from many types of trees can be cut into pieces which retain their shape and strength after drying. Wood processed into shapes for use as building materials is called lumber (North America) or timber. Not all trees produce wood suitable for lumber: some woods shrink irregularly, causing deformation of the cut piece, and others do not have sufficient strength or are too brittle for economic use.

As a structural material, wood has the advantages of being light, flexible, moderately strong, and easily produced. It has the disadvantages of being flammable, subject to attack by some insects and fungi, inhomogenous, subject to splitting, and of being limited in sizes and shapes. The majority of single-family houses in the United States are built using wood for at least some structural elements. Wood-framed houses are quite popular. Larger structures are less likely to be built using wood as a structural element, though structures up to four stories high completely framed in wood are common, and some long railroad bridges and tall roller coasters have been constructed primarily of wood.