In chemistry and chemical engineering, catalysis is a process that uses an outside substance (the catalyst) to accelerate the rate of a chemical reaction through an uninterrupted and repeated cycle of elementary steps until the last step regenerates the catalyst in its original form. The catalyst is usually present in relatively small amounts and none of it is consumed in the process.[1] In the chemical process industries, catalytic processes are of great economic importance with the petroleum industry being the largest single user.

Many substances can act as catalysts, including: metals (in particular, transition metals), chemical compounds (e.g., metal oxides, sulfides, nitrides), organometallic complexes, and enzymes. Although a catalyst may be a gas, liquid or solid, most catalysts used in industrial chemical reactions are heterogeneous (see below) and are in the form of porous pellets. Since not all parts of a solid catalyst participate in the catalysis cycle, those parts that do participate are referred to as active sites. A single porous pellet may have 1018 active catalytic sites.[1]

This article does not discuss enzymatic or biochemical catalysis (for information on those types of catalysis, see the enzyme, biochemistry and organocatalysis articles). 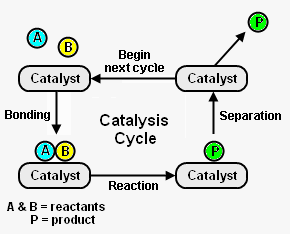 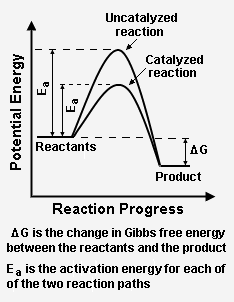 In chemistry, activation energy[4] is the energy that must be overcome in order for a chemical reaction to occur. Activation energy may also be defined as the minimum energy required to start a designated chemical reaction. It is denoted by Ea in units of kilojoules per mole (kJ/mol). It may be thought of as the energy barrier that must be overcome to start a chemical reaction. According to Arrhenius' theory the speed of reaction depends exponentially (very steeply) on the height of the energy (also known as transition) barrier. A small lowering of transition barrier can yield a drastic increase in speed.

For a chemical reaction to proceed at a reasonable rate, there should exist an appreciable number of reactant species (molecules, atoms, ions, etc.) with energy equal to or greater than the activation energy of the reaction, which means that the temperature of the reactants must be so high that enough of the reactant species have a thermal energy that is sufficient to overcome the barrier. The higher the temperature, the more molecules (or atoms, etc.) have this energy and will react, and the faster the reaction proceeds. That is, reaction speed is strongly (in fact exponentially) dependent on temperature.[3] A catalyst does not lower the activation energy for a reaction, instead it provides an alternative path for the reaction that has a lower activation energy. The catalyst changes the chemical kinetics of a reaction but not the chemical thermodynamics. The thermodynamic (Gibbs free) energy of the reactants and products is not affected by the presence of the catalyst.

The term "turn over frequency" (TOF) is used quite commonly in the technical literature to characterize the activity of catalysts. However, the definition of TOF in the literature is not consistent and varies quite widely. For example, two of the definitions in the literature are (the first is often used for homogeneous and the second for heterogeneous catalysis):

In both of the above definitions, the unit of time is sometimes designated as an hour rather than a second.

Another catalytic activity term is the katal, an SI derived unit, which is used mostly in biochemistry to characterize the activity of enzymes.[6]

Types of catalysis and examples

Catalysis can be categorized into two main types: heterogeneous and homogeneous. In heterogeneous catalysis, the catalyst is in one phase[7] while the reactants and products are in a different phase or, for some cases, two different phases. In homogeneous catalysis, the catalyst is in the same phase as the reactants and the products.[8]

A few specific examples of heterogeneous catalysis are:[8][9][10]

Promoters are substances, small amounts of which can increase the activity of a catalyst. For example, the activity of the iron (Fe) catalyst used in the Haber process for ammonia synthesis is increased by the addition of a small amount of potassium (K) as a promoter.

Inhibitors are sometimes used to increase the selectivity of a catalyst by retarding undesirable reactions. For example, the conversion of acetylene (C2H2) to ethylene (C2H4) by catalytic hydrogenation uses palladium as the catalyst and lead acetate (Pb(CH3COO)2) as the inhibitor. Without the partial deactivation of the catalyst by the inhibitor, the ethylene produced would be further hydrogenated to undesirable ethane.

As an example of the precautions taken to avoid catalyst poisoning, the expensive platinum (Pt) and rhenium (Re) catalyst in the catalytic reforming process for producing high-quality gasoline in petroleum refineries is subject to irreversible deactivation by sulfur, nitrogen and arsenic compounds. Because of that, the petroleum naphtha feedstocks to catalytic reformers are always processed for removal of such compounds prior to being fed to the reformers.

Catalysts had been used in the laboratory before 1800 by Joseph Priestly in England and by the Dutch chemist Martinus van Marum, both of whom made observations on the dehyrogenation of alcohol with metal catalysts. However, it seems that both of them regarded the metal merely as a source of heat.

These are some of the chemists whose work during the 1800's led to the development of the modern catalyst technology:[12][13]

From these early beginnings, large industries have arisen and a vast body of scientific information has been accumulated. The economic contribution from catalysis is as remarkable as the phenomenon itself. Four sectors of the world’s economy are petroleum, energy production, chemicals production, and the food industry; and they are all critically dependent on the use of catalysts. Estimates are that catalysis contributes to greater than 35% of global GDP; the biggest part of this contribution comes from the generation of high energy fuels which depend on the use of small amounts of catalysts in the world’s petroleum refineries.[22]