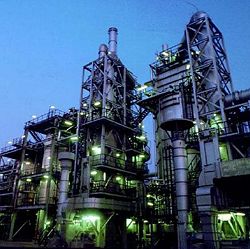 Hydrocracking is a catalytic chemical process used in petroleum refineries for converting the high-boiling constituent hydrocarbons in petroleum crude oils to more valuable lower-boiling products such as gasoline, kerosene, jet fuel and diesel oil. The process takes place in a hydrogen-rich atmosphere at elevated temperatures (260 – 425 °C) and pressures (35 – 200 bar).[1][2][3]

Basically, the process cracks the high-boiling, high molecular weight hydrocarbons into lower-boiling, lower molecular weight olefinic and aromatic hydrocarbons and then hydrogenates them. Any sulfur and nitrogen present in the hydrocracking feedstock are, to a large extent, also hydrogenated and form gaseous hydrogen sulfide (H2S) and ammonia (NH3) which are subsequently removed. The result is that the hydrocracking products are essentially free of sulfur and nitrogen impurities and consist mostly of paraffinic hydrocarbons.

Hydrocracking was first developed in Germany as early as 1915 to provide liquid fuels derived from their domestic coal deposits. The first plant that might be considered as a commercial hydrocracking unit began operation in Leuna, Germany in 1927. Similar efforts to convert coal to liquid fuels took place in the Great Britain, France and other countries.[4][5]

Between 1925 and 1930, Standard Oil of New Jersey collaborated with I.G. Farbenindustrie of Germany to develop hydrocracking technology capable of converting heavy petroleum oils into fuels. Such processes required pressures of 200 – 300 bar and temperatures of over 375 °C and were very expensive.

In the early 1960s, hydrocracking become economical for a number of reasons: 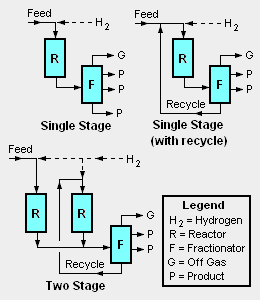 There are a good many different proprietary hydrocracker designs available for use under license as is the case for many of the other processes used in petroleum refineries. There are also a number of different hydrocracker process equipment configurations, the most common of which are depicted in the adjacent diagram:

The high-boiling, high molecular weight hydrocarbons used as feedstocks for catalytic hydrocrackers include what are commonly referred to as atmospheric gas oil from atmospheric crude oil distillation units, vacuum gas oil from vacuum distillation units, delayed coking gas oil from delayed coking units and cycle oil from fluid catalytic cracking units. For describing the hydrocracking process depicted in the typical flow diagram below, the feedstock will be referred to as simply gas oil.

After the effluent reaction product stream from the reactor bottom is cooled by the incoming gas oil feedstock, it is injected with wash water, partially condensed in a water-cooled condenser and routed into a high-pressure vapor-liquid separator for separation into three phases: hydrogen-rich gas, hydrocarbon liquid and water. Sulfur and nitrogen compounds in the gas oil feedstock are converted into gaseous hydrogen sulfide and ammonia by the hydrogenation that takes place in the first stage reactor. The purpose of the wash water is to dissolve some of the hydrogen sulfide and ammonia gases present in the first stage reaction product stream. The resulting aqueous solution of ammonium hydrosulfide (NH4HS) is referred to as sour water and is typically routed to a sour water stripper elsewhere in the petroleum refinery. The sour water stripper removes hydrogen sulfide from the sour water and that hydrogen sulfide is subsequently converted to endproduct elemental sulfur in a Claus process unit.

The hydrogen-rich gas from the high-pressure separator is routed through an amine scrubber where it is contacted with an aqueous amine solution[8] to absorb and remove residual hydrogen sulfide in the gas. The rich amine solution (containing the absorbed hydrogen sulfide) is typically routed to a central amine gas treating unit elsewhere in the refinery.

The fractionator is a continuous distillation tower that separates the hydrocracked hydrocarbon stream into naphtha, jet fuel (or kerosene) and diesel oil. The offgas from the tower's associated reflux drum joins the offgas from the low-pressure separator.

The hydrogenation of sulfur and nitrogen compounds in the first stage reactor requires the consumption of hydrogen. Likewise, the saturation of olefins and aromatics, in both the first stage and second stage reactors, to form paraffinic hydrocracked products consumes hydrogen. To a large extent, the amount of hydrogen consumption depends on the feedstock content of sulfur, nitrogen, olefins and aromatics. As a broad generality, the consumption of hydrogen in a hydrocracker may range from 1,000 to 3,000 standard cubic feet per barrel of feedstock (195 to 585 normal cubic metres per metric ton of feedstock).[9] 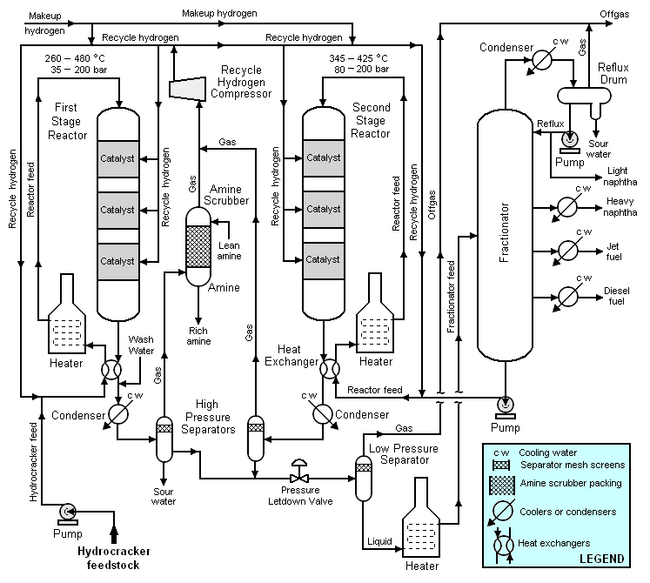 The metals that provide the hydrogenation functions can be the noble metals palladium and platinum or the base metals (i.e., non-noble metals) molybdenum, tungsten, cobalt or nickel.

Catalyst cycle life has a major impact on the economics of hydrocracking. Cycles can be as short as 1 year or as long as 5 years. Two years are typical.