The Claus process is a catalytic chemical process for converting gaseous hydrogen sulfide (H2S) into elemental sulfur (S).[1] [2][3] The process is commonly referred to as a sulfur recovery unit (SRU) and is very widely used to produce sulfur from the hydrogen sulfide found in raw natural gas and from the by-product sour gases containing hydrogen sulfide derived from refining petroleum crude oil and other industrial facilities.

There are many hundreds of Claus sulfur recovery units in operation worldwide. In fact, the vast majority of the 66,000,000 metric tons of sulfur produced worldwide in 2006 was by-product sulfur from petroleum refining and natural gas processing plants.[4]

Claus unit feed gases have a wide range of compositions. Most of the feed gases are originate from absorption (chemistry) processes using various solvents to extract hydrogen sulfide from the by-product gases of petroleum refining, natural gas processing, tar sands processing, coal gasification, smelters, coke ovens and other industries. The absorption processes used for that purpose include amine gas treating, Rectisol and Selexol to name a few.

The table below provides typical analyses of the Claus feed gases obtained from amine gas treating and from sour water stripping:

Gases with an H2S content of over 25% are suitable for the recovery of sulfur in straight-through Claus process units (as described in the next section). Other process design configurations can be used to handle gases with lesser amounts of H2S.[5]

The amount of hydrogen sulfide derived from sour water stripping in a petroleum refinery is very much less than is derived from the refinery's amine gas treating facilities. 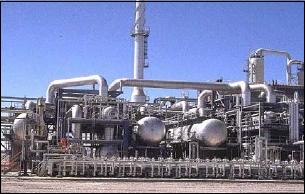 The Claus reaction to convert H2S into elemental sulfur requires the presence of one mole of SO2 for each two moles of H2S:

To provide that ratio of components, the first step in the Claus process is the combustion of one-third of the H2S in the feed gas:

Combining equations (1) and (2), the overall process reaction is:

As shown in the schematic diagram below, the feed gas to a Claus process unit is burned in a reaction furnace using sufficient combustion air to burn only one-third of the H2S it contains. That is accomplished by using a control valve (called a flow ratio controller) to provide the required ratio of combustion air to feed gas.

The hot reaction product gas, containing gaseous sulfur, is used to produce steam in a boiler (called a waste heat boiler) which results in cooling the gases. The gas is then further cooled and condensed in a heat exchanger while producing additional steam. The condensed liquid sulfur is separated from the remaining unreacted gas in the outlet end of the condenser and sent to product storage.

The separated gas is then reheated and enters the first catalytic reactor maintained at an average temperature of about 305 °C where about 20% of the H2S in the feed gas is thermally converted into elemental sulfur. The outlet product gas from the first reactor is cooled in another condenser while also producing steam. Again, the condensed liquid sulfur is separated from the remaining unreacted gas in the outlet end of the condenser and sent to product storage.

The separated gas from the second condenser is sent to another reheater and the sequence of gas reheat, catalytic reaction, condensation and separation of liquid sulfur from unreacted gas is repeated for the second and third reactors at successively lower reactor temperatures. About 5% and 3% of the H2S in the feed gas is thermally converted into elemental sulfur in the second reactor and third reactors, respectively. For a well-designed and operated Claus sulfur recovery plant having three catalytic reactors (as shown in the flow diagram), an overall conversion of at least 98% can be achieved. In fact, the latest modern designs can achieve up to 99.8% conversion of hydrogen sulfide into product sulfur that is 99+% saleable bright yellow sulfur.

The remaining gas separated from the last condenser is referred to as tail gas and is either burned in an incinerator or further desulfurized in a tail gas treatment unit (TGTU).

The various methods used for the reheating required upstream of each catalytic reactor include:

Older Claus sulfur recovery units were designed using only two catalytic reactors. Such units will typically convert only about 97% of the H2S in the feed gas. Because of stringent environmental regulatory requirements in the United States as well as many other nations, many of those older units have been upgraded to include three reactors. The tail gas from those that have not been upgraded is very probably desulfurized further in a tail gas treatment unit.

When the feed gas to a Claus unit includes ammonia and hydrocarbons (such as in the overhead gas from a petroleum refinery sour water stripper), special designs of the reaction furnace burner are available to provide complete combustion of those feed gas components.

The catalytic reactors each contain a bed of catalyst with a depth of about 90 to 120 cm. The most widely used Claus reaction catalyst is porous aluminium oxide (Al2O3), commonly referred to as alumina. [6] [7] [8]

The alumina catalyst owes its activity to a very high surface area of 300 m²/g or higher. About 95 % of that surface area is provided by pores having diameters of less than 8 nm (80 Angstroms).

The catalyst not only increases the kinetics (i.e., the rate of reaction) of the Claus reaction equation (1), but it also hydrolyzes the carbonyl sulfide (COS) and carbon disulfide (CS2) that is formed in the reaction furnace:

In nineteenth century, there were many alkali manufacturing plants in England producing sodium carbonate (Na2CO3) by the Leblanc process. The original Claus process was developed by Carl Friedrich Claus, a chemist working in England, for the purpose of recovering sulfur from the waste calcium sulfide (CaS) generated by the Leblanc process. As a catalyst, he chose a bog iron ore and later bauxite (a mineral with a high alumina content).[9] In 1883, Claus was granted a British patent for the process.[8][9][10]

During the next 53 years, the Claus process underwent several minor modifications. In 1936, I.G. Farbenindustrie a (German conglomerate of chemical companies) introduced a modification of the process that utilized a thermal conversion step followed by catalytic conversion steps, which is the basically the concept currently used in modern Claus sulfur recovery units.