The exponential function of

, can be defined as the solution of the differential equation

with the additional condition

The study of the exponential function began with Leonhard Euler around 1730.[1] Since that time, it has had wide applications in technology and science; in particular, exponential growth is described with such functions.

The exponential is an entire function.

For any complex p and q, the basic property holds:

The definition allows to calculate all the derivatives at zero; so, the Taylor expansion has the form

means the set of complex numbers. The series converges for any complex

. In particular, the series converges for any real value of the argument.

The inverse function of the exponential is the logarithm; for any complex

Exponential also can be considered as inverse of logarithm, while the imaginary part of the argument is smaller than

When the logarithm has a cut along the negative part of the real axis, exp can be considered.

is widely used in applications; this notation is commonly accepted. Its approximate value is

Periodicity and relation with sin and cos functions

Exponential is periodic function; the period is

The exponential is related to the trigonometric functions sine and cosine by de Moivre's formula: 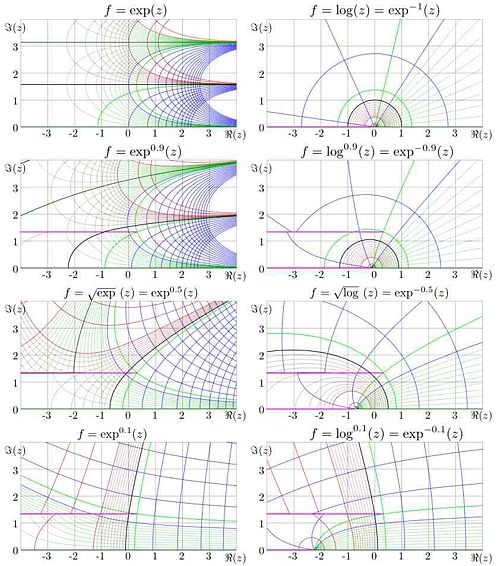 plane for some real values of 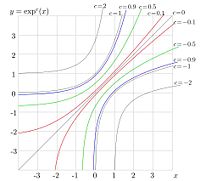 for some real values of

is used for the exponential with scaled argument;

is used for the iterated exponential:

For non-integer values of

, the iterated exponential can be defined as

The inverse function is defined with condition

and, within some range of values of

If in the notation

the superscript is omitted, it is assumed to be unity; for example

. If the subscript is omitted, it is assumed to be

are marked with thick green lines, where

is fixed point of logarithm. At non-integer values of

are branch points of function

; in figure, the cut is placed parallel to the real axis. At

there is an additional cut which goes along the negative part of the real axis. In the figure, the cuts are marked with pink lines.

For real values of the argument, function

is ploted in figure versus

.
in programming languages, inverse function of exp is called log.

For logarithm on base e, notation ln is also used. In particular,