From Citizendium
(Redirected from Cos)
Jump to: navigation, search

In trigonometry, the function sine and its complementary function cosine, abbreviated sin and cos, are central. They are used to express relations between angles and sides of triangles. The functions are very common and important in all branches of science and technology. It is possible to define sine and cosine in different ways. Two ways, one based on plane geometry and one based on differential equations, will be discussed below.

In most countries, schoolchildren begin to study mathematics with arithmetics, elementary algebra and 2-dimensional Euclidean geometry (plane geometry). [1]. When they learn about sin and cos, the students already have some idea about addition and measurement of angles, segments and areas; they already have accepted the axioms of Euclid, in particular his famous fifth parallel axiom, and they know the Pythagorean theorem. Therefore, the trigonometric functions are defined as ratios of the lengths of sides of right-angled triangles, for example, the ratio of the length of a leg to that of the hypothenuse. We will outline this approach, but point out that an alternative approach is possible which does not rely on Euclid's axioms. This approach, which is more advanced in that it needs some knowledge of differential calculus, will be given in the next section.

Definition of sine and cosine in plane geometry

Applying the same definitions to the complementary angle ∠DAC (= 90°−α) we find from the dashed blue triangle in Fig. 1,

We see that for complementary angles the functions sine and cosine are interchanged, hence the name "cosine" (short for "complementary sine").

The Pythagorean theorem states that b2 = a2+c2, so that we get the following important relation between the sine and the cosine functions

Since this elementary definition of sine and cosine is in terms of ratios of lengths, which are positive, the definition needs to be generalized in order to account for negative function values.

We recall that a vector r in a 2-dimensional plane can be represented by two Cartesian coordinates, which are real numbers: r = (x, y). These numbers are the projections of r on the x- and the y-axis, respectively. The length of r is denoted by |r| and is defined by

Assuming that the length of r is non-zero we can divide the components of the vector by it and obtain a unit vector er, which by definition has length unity. Unit vectors in the plane have their endpoints on a unit circle (circle with unit radius).

Consider Fig. 1 again. Assume now that the length b equals 1, then the vector eAC pointing from point A to point C is a unit vector. Assume a Cartesian system of axes with the origin in A and let the x-axis be along A–B and the y-axis be along A–D. Clearly cosα = c is the projection of eAC on the x-axis, i.e., cosα = c is the x-coordinate of this unit vector. Similarly sinα = a is the y coordinate of the unit vector. This observation leads to the following definition, which is a generalization of the earlier one.

Definition: If e is a unit vector obtained from ex by a positive (counter-clockwise) rotation over the angle α, then cosα is the x coordinate of e and sinα is the y coordinate of e:

The unit vector e is depicted (as a red vector with endpoint on the unit circle) in the four different quadrants in Fig. 2.

It is also clear from the definition that, when α is rotated over more than 360°, the unit vector is back at an angle between 0° and 360°. Therefore, for positive integer k,

Further one sees easily that α is mapped to −α under this reflection. That is, upon reflection α and the y-coordinate change sign and the x-coordinate is invariant (stays the same), hence

When one rotates the unit vector clockwise over more than 360° one arrives again at a position between 0° and 360°, so that for positive integer k,

By standard arguments of plane Euclidean geometry one can compute the numerical values of sine and cosine for a few specific angles. The application of differential calculus (see later in this article) allows the computation of the function values for all angles. Thus, one obtains the graphs shown in Fig. 3. 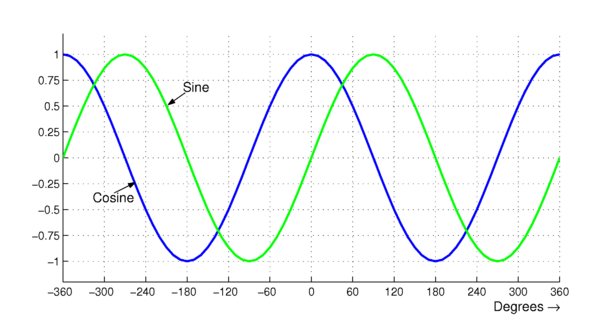 The proof is easiest in matrix notation. Because we do not expect readers to know this notation we give the proof in long-hand notation and only indicate briefly the equivalent matrix form. The unit vectors and angles that play a role in the proof are depicted in Fig. 4.

In Fig. 4C the doubly primed (red) vector ex " is given in terms of the unprimed (black) vectors:

(In matrix notation the last two expression are equivalent to the multiplication of a row vector with a square matrix). Putting Eqs. (1) and (2) for ex " in terms of the unprimed unit vectors side by side, we find the equations to be proved. This conclusion is allowed because ex and ey are linearly independent.

One could say that the geometrical approach assumes the properties of sin and cos rather than deduce them. These assumptions are masked as the geometric axioms. However, as we will now show, the deduction of properties of trigonometric functions does not require axioms of geometry. Properties of sin and cos do not depend, for example, on the acceptance or rejection of the Euclid's parallel axiom. The functions sin and cos can be defined algebraically, and their properties can be deduced, not postulated. The basic elements of such a deduction are outlined below.

The definitions of derivative and integral do not depend on trigonometric functions, and the basic properties of integrals and derivatives (in particular the Cauchy-Kowalevski theorem of existence and uniqueness of the solution of the Cauchy problem) can be deduced without reference to sin, cos, or any axioms of Euclidean geometry. Therefore, a natural and consistent way of defining the functions sin and cos is via differential equations.

We will indicate the first derivative of a function with respect to its variable by a prime:

Usually, it is assumed that the independent variable t is real; in that case, the values of the functions sin and cos are also real numbers. However, the definition above can be used for complex numbers too.

) and therefore can be used for the definition of

. But, one pays for this by having to deduce the properties of sin and cos from the system (1)–(4).

constant . Evaluation of this constant from equations (2) and (3) gives

In this article, the superscript as indicator of exponentiation is always written last to specify the argument, avoiding the confusions. [2]

For the equation (5) it follows, that for all real values of t the functions sin(t) and cos(t) are bounded:

These properties allow efficient bracketing of functions sin and cos.

Consider sin(x) and cos(x) in the case x > 0. From equation (1) it follows that sin'(x) ≤ 1 . Integration of the last inequality with respect to

Integrating this inequality with respect to

Integrating equation (12) with respect to

Integrating this equation with respect to

Continuing this exercise, one can obtain more and more narrow bounds for values of sin and cos.

However, even equations (9,12) are sufficient to see that both both sin and cos remain positive while, the argument is within (0,1) range. This property is used below to reveal periodicity of these functions.

Applying the mathematical induction, it is possible to show that for positive integer

and equality takes place only at

Is cos always larger than sin?

be exact upper bound of such interval. Within this interval, sin is monotonously increasing, and cos is monotonously decreasing. Therefore, there exist one and only one solution

Let us estimate value of this solution.

into equation(11). This gives

In such a way,

into equation (11); this gives

From equation (5) it follows that

Both sin and cos are positive in the range (0,1); and, therefore,

Symmetry and sense of number

keeps the system (1)-(4) invariant. This means that

It follows, that functions sin and cos are periodic; and

is period. The deduction above can be used as definition of number

appears as half of period of functions which are solutions of equations (1,2).

, equations (1,2) are sufficient: due to the linearity of equations and the translational invariance, conditions (3,4) do not affect the period; all the solutions with different conditions at zero have the same period.

From estimate (21) it follows that

The improvement of this estimate using the expansions (13), (14) is possible but computationally non-efficient. The efficient algorithms for evaluation of

are mentioned in the spacial article about Pi. Usually, the efficient algorithms require more efforts for the deduction.