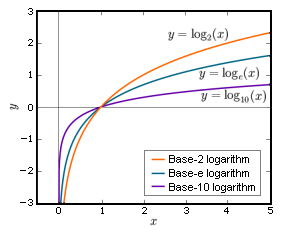 (PD) Image: Fredrik Johansson
Logarithmic function of real argument for the three most common values of base.

is called the base and

Logarithms show up in a variety of scientific formulas: for example, the number of bits required to represent the address of a particular location in computer memory is equal to the base-2 logarithm (rounded upwards) of the number of possible locations. Logarithms are also useful for representing large numbers in a more manageable form.

Logarithms of intermediate and fractional values

Because we use a base-10 number system, it is often convenient to use 10 as the base of the logarithm. It's easy to find the base-10 logarithm of a number such as 1000, because

. (The value of the logarithmic function is the number that appeared as an exponent in the other equation.) But what is the logarithm of a number such as 43, or 0.001?

We know from the study of exponents that, for example,

and this then supplies a value for

. Values for many other numbers can be worked out similarly using cube roots and so on, and values for all real numbers can then be defined using limits. For example,

is approximately equal to 1.63347. Multiplying a number by 10 appends a zero to the numeral and adds 1 to the base-10 logarithm, therefore

and it then follows that

By a similar argument it can be established that

Shape of the logarithm function

where b is a real-number base greater than 1 of the logarithm. Since any positive real number raised to the exponent zero is 1, the logarithm of 1 is zero. To the right of 1 on the x-axis, the function

continually increases, but increases more and more slowly as

heads towards infinity. Between 1 and 0, the logarithmic function has negative values, and asymptotically approaches minus infinity as

approaches zero. For negative values of

, there is no defined value of

within the real numbers — but using complex numbers a value can be found, as will be discussed further below.

Suppose we know the logarithm of a number using one base

, and we want to find the logarithm using a different base

and we want to find

. We need to look up the value of

, and then by multiplying we can find the desired quantity:

This formula can be established using the definition of logarithms and the rule for multiplying exponents:

, the formula we wished to prove.

A useful formula for

can be derived using the rule for adding exponents:

Other useful formulas include these identities:

The base must not be 0 nor 1. The most widely used bases for logarithms are 10, 2 and the transcendental number

When logarithms are used to measure physical values (e.g., when noise is measured in decibels) it is common to use 10 as a base, and in these contexts, the notation

Mathematicians and physicists often find, however, that

as a base is called the natural logarithm; it has the special property that its derivative is

is often used for natural logarithms, but in mathematics it is just as common to use the notation

and write logarithms to base 10 using the full notation

Computer science adds a whole new wrinkle because, in some cases, it is most useful to consider logarithms to base 2, and this has led to a new notation

which become common for logarithms to a base of 2. Finally, the notation

is sometimes used for logarithms to base 2, but this is usage is less common.

In German and Russian literature,

is used to mean the common logarithm

.[1] The advice of the United States Department of Commerce's National Institute of Standards and Technology is to follow the ISO standard Mathematical signs and symbols for use in physical sciences and technology, ISO 31-11:1992, which suggests these notations:[2]

It is obvious that, until a standard such as the ISO standard is universally accepted, perhaps the surest way to avoid confusion is to always use the notation of 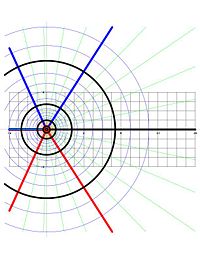 The exponential function of an imaginary number is given as

Consequently if u and v are real numbers then

The sine and cosine functions are not one-to-one and hence neither is this complex exponential function. Therefore it has no inverse function, as the concept of "function" is generally defined in the present day. However, one may speak of the logarithm as being a multiple-valued function (strictly speaking, an oxymoronic term by current conventions).

To find the logarithm of a complex number

, it is convenient to express the number in polar coordinates

is the length of the line segment joining the number to the origin in the complex plane, and

is the angle that line segment makes with the

-axis). The equivalence of the two notations is given by

. Using the formula for the exponential function above,

is a value of

. However, in numerical calculus, it is preferably to work with a function that returns number rather than address of the array of possible values. In the case of multivalued functions, the result of evaluation of a function cannot be used for evaluation of another function; in addition, in the case of logarithm, the array of values has infinite length. Intents to work with multivalued functions as if they would be "conventional" functions leads to confusions. Therefore, usually one works with single-valued functions.

A single-valued logarithmic function is defined by, restricting the values of the

. In this way, the log function is interpreted in the most of programming languages - Mathematica, Maple(software), Matlab, C++; evaluation of the function log returns value

In this way, the domain of the logarithmic function can be extended to cover the entire complex plane except for the number zero, which has an undefined value — a singularity with the real part plunging towards minus infinity and the imaginary part spinning wildly like a compass at the North Pole. The function is discontinuous along the negative

-axis (see figure); this line of discontinuity is called the cut of the logarithm. The logarithm is a holomorphic function on the complex plane except for the origin and the cut. 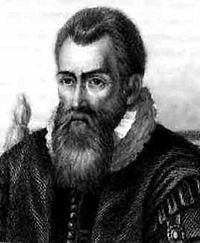 © Image: The History for Computing Project
Portrait of John Napier.[3]

The method of logarithms was first publicly propounded in 1614, in a book entitled Mirifici Logarithmorum Canonis Descriptio, by John Napier, Baron of Merchiston, in Scotland.[4]

Jost Bürgi, a Swiss mathematician, independently discovered logarithms but did not publish his discovery until four years after Napier.[5]

In 1617, the English mathematician, Henry Briggs, after collaborative discussions with Napier, published his first tables of logarithms using a base of 10 rather than Napier's original base of 1/e. In 1624, Briggs published his Arithmetica Logarithmica containing the logarithms of thirty thousand numbers to fourteen decimal places (1 to 20,000 and 90,000 to 100,000). To this day, logarithms using the base ten are often referred to as "Briggsian" logarithms.

Early resistance to the use of logarithms was muted by the support of Johannes Kepler, the German mathematician and astronomer, who published a clear and impeccable explanation in 1624 of how logarithms worked.[6]

The use of logarithms contributed to the advance of science, and especially of astronomy, by making some difficult calculations possible. Prior to the advent of electronic calculators and computers, logarithms were used extensively in surveying, navigation, engineering, chemistry and many other disciplines.

The importance of logarithms

Before the advent of calculators and computers

The operations of addition and subtraction are much easier to perform than are the operations of multiplication and division. Logarithms were characterized by Pierre-Simon Laplace, the French mathematician and astronomer, as "doubling the life of an astronomer". The German mathematician, Karl Friedrich Gauss, who also did work in physics and astronomy, is said to have memorized a table of logarithms to save the time required to look up a logarithm each time he needed one.[7]

The use of logarithms was widespread because of their relative simplicity compared to multiplication, division, or raising numbers numbers to an exponential power. A few numerical examples, using base-10 logarithms (to eight decimal places) will illustrate that simplicity.

Note: The antilog of x is simply the logarithm base raised to the power of x which, in the above examples, is 10x.

After the advent of calculators and computers

Although calculators and computers have essentially replaced the use of logarithms for arithmetic computations (multiplication, division, finding roots, exponentiation, etc.), they are still used for various purposes in many fields. For example: