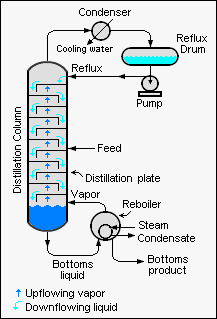 The Fenske equation is used for calculating the minimum number of theoretical plates required for the separation of a binary feed stream by a distillation column that is being operated at total reflux (i.e., which means that no overhead product is being withdrawn from the column). The derivation of the Fenske equation assumes that the relative volatility is constant in the distillation column.

Theoretical plates are also often referred to as theoretical trays or equilibrium stages.

The equation was derived in 1932 by Merrell Fenske, a professor who served as the head of the chemical engineering department at the Pennsylvania State University from 1959 to 1969.[1]

A common version of the Fenske equation

This is one of the many different but equivalent versions of the Fenske equation:[2][3][4][5]

For ease of expression, the more volatile and the less volatile components are commonly referred to as the light key (LK) and the heavy key (HK), respectively. Using that terminology, the above equation may be expressed as:[3]

If the relative volatility of the light key to the heavy key is constant from the column top to the column bottom, then

. If the relative volatility is not constant from top to bottom of the column, then the following approximation may be used:[2]

The above form of the Fenske equation can be modified for use in the total reflux distillation of multi-component feeds.

Another form of the Fenske equation

Using Raoult's law and Dalton's law for a series of condensation and evaporation cycles (i.e., equilibrium stages or theoretical plates), another form of the Fenske equation is obtained for use in gas chromatography:[6]

denote the more volatile and the less volatile components, respectively.

There are many so-called shortcut calculation methods for designing industrial distillation columns. The most commonly used one is the Fenske-Underwood-Gilliland method.

The Fenske equation estimates the minimum number of theoretical plates or equilibrium stages at total reflux. The Underwood equation[7] estimates the minimum reflux for an infinite number of theoretical equilibrium stages. The Gilliland method[8] then uses Fenske's minimum plates and Underwood's minimum reflux to estimate the theoretical plates for a given distillation at a chosen reflux.

The estimates such as provided by the Fenske-Underwood-Gilliland shortcut calculations are most effective when used to obtain a preliminary design before following up with the use of distillation simulation software which utilize much more rigorous calculation methods.