From Citizendium
(Redirected from Radioactive)
Jump to navigation Jump to search

Radioactivity is the phenomenon of emission—i.e., radiation—of electromagnetic energy and subatomic particles by the atomic nuclei of some of Earth's naturally occurring chemical elements, and all those 'artificial' chemical elements made by scientists in the laboratory. Atoms whose nuclei exhibit the phenomenon of radioactivity are referred to as being 'radioactive'. Nuclei can radiate spontaneously or can be induced to do so by nuclear fission (splitting of the nucleus) or nuclear fusion (merging of nuclei). Energy release is in the X-ray, gamma radiation and cosmic radiation ranges of the electromagnetic spectrum, and as kinetic energy of particles such as neutrons, alpha particles, beta particles, and neutrinos.[1] [2]

Nuclei are composed of positively charged particles, protons and—with the exception of the hydrogen nucleus—one or more electrically neutral particles, neutrons. The number of protons defines the atomic number, and the total number of protons and neutrons defines the atomic mass. Counteracting the repulsive electromagnetic force between the positively charged protons, another fundamental force of nature, an attractive force, called the strong nuclear force, comes into play when protons become closely packed, close enough (<10−15 meters apart) to essentially touch each other. That strong attractive force helps keep the protons from flying apart.

Neutrons, nearly the same size and mass as protons but carrying no electrical charge, also feel the strong nuclear force. The presence of neutrons, interposed among the protons, adds to the mass of the nucleus, and also to its overall strong attractive force, thus helping stabilize the nucleus. A radioactive isotope lacks some number of neutrons needed to stabilize the nucleus. In general an unstable nucleus will, in the process of radiation, 'decay' to a more stable one.

Quantum mechanics postulates that it is impossible to predict at which point in time a given nucleus will emit particles or γ rays, but statistics may be applied to a sufficiently large number of nuclei and it becomes possible to speak of the half-life, which is the time-period in which half the nuclei have undergone radioactive decay.

For example, uranium, with an atomic number of 92, has the relatively stable isotope 238U with a half-life of 4.46 × 109 years. Although this is a very long period, a sufficiently large collection of   238U nuclei emits detectable amounts of α particles and even its decay product, the 234 isotope of thorium, emits detectable amounts of β particles. 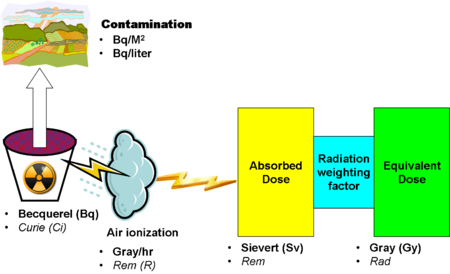 Overview of phenomena and units

A variety of units of radioactivity characterize the energy of a radioactive source, as well as its absorption by different materials.

To fully appreciate the history of radioactivity requires appreciating the history of the studies of the nature and uses of electricity that led to the discovery of X-rays....

Radioactivity was first discovered in uranium salts. Henri Becquerel noted on 1 March 1896 that the uranyl salt K2UO2(SO2)2•(H2O)2 blackens photographic film after several days of contact. It is now believed that the blackening observed by Becquerel was caused by the β radiation from uranium's "daughter" thorium. In 1898 Marie Curie and her husband Pierre coined the name "radioactive substance" and afterwards it was a small step to the term radioactivity.

Uranium's 235 isotope, which occurs in nature with an abundance of about 0.7%, is only slightly less stable than the 238 isotope, with a half-life of 7.13 × 108 years. It will fission into two almost equal parts when it is struck by a neutron and then it releases enormous amounts of energy, which makes the 235 isotope suitable as fuel for nuclear reactors and as explosive in nuclear weapons.