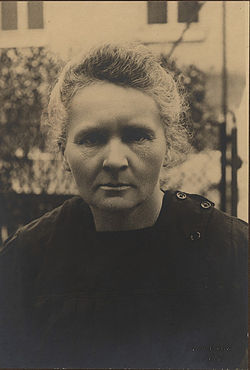 Marie Curie (born Maria Skłodowska in Warsaw, Poland on November 7, 1867), was a pioneer in radioactivity research and the first woman to win a Nobel Prize. She died of leukaemia on July 4, 1934.

She studied mathematics, chemistry and physics at the Sorbonne in Paris in 1891, becoming the first woman to teach there. Whilst teaching there she met Pierre Curie, a physics teacher at the University of Paris. Marrying soon after, they began joint research on radioactive substances. They isolated two radioactive elements in 1898, polonium (named after Marie Curie's native Poland) and radium, from a mineral called pitchblende. Marie and Pierre jointly won the Nobel Prize in Physics for their research on radioactivity in 1903, together with Antoine Henri Becquerel who had independently discovered natural radioactivity in 1896. In the same year, she also received, again jointly with her husband, the Davy Medal of the Royal Society.

When Pierre died in 1906, Marie devoted herself to continuing the work that they had begun together. She received a second Nobel Prize, for Chemistry, in 1911 for the discovery and study of polonium and radium. This made her the first person to be awarded two Nobel Prizes, a feat since then repeated by only three others.

Throughout her life, Marie Curie promoted the use of radium to alleviate suffering, and during World War I, assisted by her daughter, Irène, she personally devoted herself to this work. In 1921, President Harding of the USA, on behalf of the women of America, presented her with one gram of radium in recognition of her service to science, and in 1929 President Hoover of the USA presented her with $50,000 donated by American friends of science to purchase radium for use in the radioactivity laboratory in Warsaw which she had helped to establish.

Irène Joliot-Curie, the daughter of Marie and Pierre Curie, who was born in Paris on September 12, 1897, also received the Nobel Prize in Chemistry in 1935, jointly with her husband Jean Frédéric. The Curies' younger daughter, Eve, wrote Madame Curie, a well-know biography of her mother. She married H.R. Labouisse who was the director of UNICEF when UNICEF was awarded a nobel peace prize, making the Curies the most successful family to date, in terms of Nobel Prizes won.