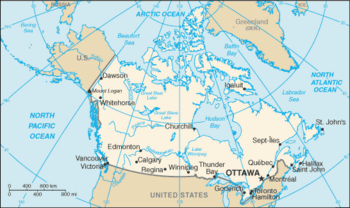 Canada is the world's second largest country by total area, occupying most of northern North America. Extending from the Atlantic Ocean to the Pacific Ocean and northward into the Arctic Ocean, Canada shares land borders with the United States to the south and to the northwest. Canada is a constitutional monarchy and a parliamentary democracy. It was formed as a confederation of British colonies in 1867 and secured effective independence in the 1920s. With a population of 35 million spread over 10 million km², and major oil supplies, Canada is one of the most prosperous countries of the world and a magnet for immigrants. It is an active member of NATO and the United Nations. Since the 1970s a sovereignty movement in French-speaking Quebec has proposed independence for the province, but the issue is currently quiet. Liberal Justin Trudeau became the prime minister in 2015; the capital is Ottawa.

Aboriginal tradition holds that the First Peoples inhabited parts of Canada since the dawn of time. Archaeological studies support a human presence in northern Yukon to 26,500 years ago, and in southern Ontario to 9,500 years ago.[1][2]

Europeans first arrived when the Vikings settled briefly at L'Anse aux Meadows circa AD 1000. The next Europeans to explore Canada's Atlantic coast included John Cabot in 1497 for England and Jacques Cartier in 1534 for France. French explorer Samuel de Champlain arrived in 1603 and established the first permanent European settlements at Port Royal in 1605 and Quebec City in 1608. Among French colonists of New France, Canadiens extensively settled the St. Lawrence River valley, Acadians settled the present-day Maritimes, while French fur traders and Catholic missionaries explored the Great Lakes, Hudson Bay and the Mississippi watershed to Louisiana. The French and Iroquois Wars broke out over control of the fur trade.

The English established fishing outposts in Newfoundland around 1610 and colonized the Thirteen Colonies to the south. A series of four Intercolonial Wars between France and England occurred between 1689 and 1763. Mainland Nova Scotia came under British rule with the Treaty of Utrecht (1713); the Treaty of Paris (1763) ceded all of New France to Britain following the Seven Years' War.

The Royal Proclamation (1763) carved the Province of Quebec out of New France and annexed Cape Breton Island to Nova Scotia. It also restricted the language and religious rights of French Canadians. In 1769, St. John's Island (now Prince Edward Island) became a separate colony. To avert conflict in Quebec, the Quebec Act of 1774 expanded Quebec's territory to the Great Lakes and Ohio Valley, and re-established the French language, Catholic faith, and French civil law in Quebec; it angered many residents of the Thirteen Colonies, helping to fuel the American Revolution.

The Americans invaded in 1775-76, and received some support but most habitants were neutral and the British beat back the invasion. In 1777 the British used Canada as a base to invade New York, but were decisively defeated and the main army surrendered at Saratoga. The Americans, angry at British support for Indian raids, drove hostile Iroquois out of New York permanently; they resettled in Canada.

The Treaty of Paris (1783) recognized American independence and ceded territories south of the Great Lakes to the United States. Approximately 50,000 United Empire Loyalists fled the United States to Canada.[3] New Brunswick was split from Nova Scotia to facilitate Loyalist settlements in the Maritimes. To accommodate English-speaking Loyalists in Quebec, the Constitutional Act of 1791 divided the province into French-speaking Lower Canada and English-speaking Upper Canada, granting each their own elected Legislative Assembly.

Canada was a major front in the War of 1812 between the United States and the British Empire. Prior to the war large numbers of immigrants from the United States brought with them Republican values. The defence of Canada contributed to a sense of imperial loyalty among British residents, who repudiated Republicanism. Large-scale immigration to Canada began in 1815 from Britain and Ireland. The timber industry surpassed the fur trade in importance in the early 1800s.

The desire for Responsible Government resulted in the aborted Rebellions of 1837. As a result, the Durham Report(1839) recommended responsible government and the assimilation of French Canadians into British culture.[4] The Act of Union (1840) merged The Canadas into the United Province of Canada. French and English Canadians would work together in the Assembly to reinstate French rights. They later established responsible government in 1849, as would all British North American colonies. Montreal was the capital of the United Province of Canada, from 1844 to 1849, until the House of Assembly was burned by an angry mob. [5]

In 1846 Britain and the United States ended the Oregon boundary dispute, extending the border westward along the 49th parallel, and paving the way for British colonies on Vancouver Island (1849) and in British Columbia (1858). Canada launched a series of western exploratory expeditions to claim Rupert's Land and the Arctic region. The Canadian population grew rapidly because of high birth rates; British immigration was offset by emigration to the United States, especially by French Canadians moving to New England.

Following several constitutional conferences, the British North America Act brought about Confederation creating "one dominion under the name of Canada" on July 1, 1867 with four provinces: Ontario, Quebec, Nova Scotia, and New Brunswick. Canada assumed control of Rupert's Land and the North-Western Territory to form the Northwest Territories. Métis grievances ignited the Red River Rebellion and the creation of the province of Manitoba in July 1870. British Columbia and Vancouver Island (which had united in 1866) and the colony of Prince Edward Island joined Confederation in 1871 and 1873, respectively. Prime Minister John A. MacDonald's Conservative Party established a National Policy of tariffs to protect nascent Canadian manufacturing industries. To open the West, the government sponsored construction of three trans-continental railways (most notably the Canadian Pacific Railway), opened the prairies to settlement with the Dominion Lands Act, and established the North West Mounted Police to assert its authority over this territory. Under Liberal Prime Minister Wilfrid Laurier, continental European immigrants settled the prairies, and Alberta and Saskatchewan became provinces in 1905.

Canada automatically entered the First World War in 1914 with Britain's declaration of war, sending volunteers to the Western Front to fight as a national contingent. The Conscription Crisis of 1917 erupted when conservative Prime Minister Robert Borden brought in compulsory military service over the objection of French-speaking Quebecers. In 1919, Canada joined the League of Nations independently of Britain; in 1931 the Statute of Westminster affirmed Canada's independence.

The Great Depression of 1929 brought economic hardship to all of Canada. In response, the Co-operative Commonwealth Federation (CCF) in Alberta and Saskatchewan presaged a welfare state as pioneered by Tommy Douglas in the 1940s and 1950s. Liberal Prime Minister William Lyon Mackenzie King secured Parliament’s approval for entry into the Second World War in September 1939, after Germany invaded Poland. The first Canadian Army units arrived in Britain in December 1939. The economy boomed as industry manufactured military materiel for Canada, Britain, and the Soviet Union. Despite another Conscription Crisis in Quebec, Canada finished the war with one of the largest militaries in the world.[6]

Canada marked its centennial in 1967 with the Expo 67 world's fair in Montreal.

Quebec underwent profound social and economic changes during the Quiet Revolution of the 1960s. Québécois nationalists began pressing for greater provincial autonomy. The separatist Parti Québécois first came to power in 1976. A referendum on sovereignty-association in 1980 was rejected by a solid majority of the population, and a second referendum in 1995 was rejected by a slimmer margin of just 50.6% to 49.4%.[8] In 1997, the Canadian Supreme Court ruled unilateral secession by a province to be unconstitutional; Quebec's sovereignty movement has continued nonetheless.[8]

Under successive Liberal governments of Lester B. Pearson and Pierre Trudeau, a new Canadian nationalism emerged. Canada adopted its current Maple Leaf Flag in 1965. In response to a more assertive French-speaking Quebec, the federal government became officially bilingual with the Official Languages Act of 1969. Non-discriminatory Immigration Acts were introduced in 1967 and 1976, and official multiculturalism in 1971; waves of non-European immigration have changed the face of the country. Social democratic programs such as Universal Health Care, the Canada Pension Plan, Canada Student Loans were initiated in the 1960s and consolidated in the 1970s; provincial governments, particularly Quebec, fought these as incursions into their jurisdictions. Finally, Prime Minister Pierre Trudeau pushed through the patriation of the constitution from Britain, enshrining a Charter of Rights and Freedoms based on individual rights in the Constitution Act of 1982.

Economic integration with the United States has increased significantly since World War II. The Canada-United States Automotive Agreement (or Auto Pact) in 1965 and the Canada-United States Free Trade Agreement of 1987 were defining moments in integrating the two economies. Canadian nationalists continued to worry about their cultural autonomy as American television shows, movies and corporations became omnipresent.[9] However, Canadians take special pride in their system of universal health care and their commitment to multiculturalism.

In 1867, with the passage by the British parliament of the British North America Act 1867, the Confederation of Canada was formed.

Canada is a constitutional monarchy, with the monarch being represented federally by a Governor General and provincially by a Lieutenant Governor General. Support for the monarchy is mixed in Canada, with a lower level of support in French-speaking Quebec. The powers of the provinces and the federal government are laid out in the Canada Act.

The two largest political parties at the federal level are the Conservative Party of Canada, currently in power as a minority government, and the Liberal Party of Canada, who form the Official Opposition. The other two parties with official party status are the New Democratic Party of Canada and the separatist Bloc Québecois.

Canada is a member of NORAD and NATO. Canadian troops are currently serving on the front lines in Kandahar, Afghanistan.

The Laurentian Mountains in Quebec is one of the oldest mountain ranges in the world. It contains rocks deposited during Cambrian time, 540 million years ago. [10].

English and French are Canada's two official languages. The Canadian Charter of Rights and Freedoms enshrines the personal freedoms and language rights in Canada.

Quebec has distanced itself from a Canadian identity, and businesses have followed suit. For example, in 2007 Bombardier's new national TV ad campaign extols the plane-and-train maker's Canadian identity, but omits any such reference in the French-language version. "Planes. Trains. Canadian Spirit" becomes "Planes. Trains. A Source of Pride" in the French TV spots ("Des avions. Des trains. Une fierté"). Advertisers have long realized that many of Quebec's francophone speakers are hostile to ads containing pro-Canada sentiments. Wal-Mart Canada's Quebec communications chief explains, "In many cases, if you have a prominent reference to Canada, half the population won't listen or will be irritated." Labatt's popular Blue brand of beer sports a Maple Leaf on its label, but in Quebec it is replaced with a red wheat sheaf. Molson Coors beer company did not run the famous "I Am Canadian" TV ads in Quebec; it sells its Molson Dry brand in Quebec while the Canadian brand is its flagship brew in the rest of Canada.[11]

The current "Maple Leaf" flag of Canada was adopted in 1965 after great controversy. The Canadian Red Ensign was the previous national flag and had the Union Jack design, a British symbol, in the canton area of the flag. [12]