The American Revolution was the political and military action of the American colonists who overthrew British imperial control, and created an independent new nation in 1776, the "United States of America."

Most "revolutions" in history, like the later French Revolution of the 1790s, involve the overthrow of an old social structure in the search for freedom. Not this one. This one was designed to protect freedoms colonists already had created for themselves in their largely self-governing colonies. As Gordon Wood (1966) explains, "The Revolution had taken place not in a succession of eruptions that had crumbled the existing social structure, but in a succession of new thoughts and new ideas that had vindicated the social structure."[1] Those "new thoughts and new ideas" comprised "republicanism."

After the Seven Years War the French threat ended. London decided to start taxing the colonies to pay for past and future wars, and imposed new controls on the colonial economy and on westward expansion. London insisted that the colonists pay a share of the cost of empire through new taxes, but refused to allow representation in Parliament. The Americans rallied around the idea that no Englishman could be taxed without his consent, that is, "No taxation without representation."

Ominously London sent thousands of regular army troops--was this to protect the colonists from nonexistent threats, or to protect the Royal officials from the anger of the people? Nothing seemed more dangerous to the precious political liberties of the Americans than the sort of standing army Britain was forcing upon them. The colonists responded by setting up their own shadow government, including local committees and (beginning in 1774) a Continental Congress. The issue all along was whether London would allow the Americans any voice in making decisions, especially about taxes. Neither side was willing to compromise.

In 1765 Great Britain held by far the largest empire in the world. However, Britain also had the largest deficit in the world; approximately £140 million. Prime Minister George Grenville decided to impose a stamp tax on the colonies, that is taxes on legal and commercial documents such as newspapers, marriage licenses, and diplomas. Grenville claimed that the taxes were fair and just, but he never consulted the colonists. Indeed, the issue was that he insisted there was no need to consult them. Americans vehemently opposed the Stamp Act because it violated their rights as Englishmen: no Englishman could be taxed without his consent. Colonists met informally at the "Stamp Act Congress" in New York, with 27 delegates from 9 colonies. The Stamp Act Congress issued a protest to London, calling on the Parliament and King to nullify the Act. The resolution was completely ignored in England. However, the Stamp Act congress was the first assembly of the American self-governing colonies, and portended the Continental Congress of 1774.

On their own the colonies started massive non-importation agreements. Merchants completely and abruptly ended all trade in any form with great Britain, severely crippling Britain's economy. This was also another huge step for colonial unity. Another effective tactic was the forced resignation of all stamp agents on the day the Stamp Act came into effect. On March 18th 1766 after a heated debate, Parliament repealed the Stamp Act, but the same day also the "Declaratory Act" that asserted that the king and Parliament "had, hath, and of right ought to have the full power and authority to make laws and statutes of sufficient force and validity to bind the colonies and people of America, subjects of the Crown of Great Britain, in all cases whatsoever". The deeper constitutional issue of "no taxation without representation," as the American cry went, was not settled.

Republicanism as the cause of the Revolution

In a larger sense the tax issue was part of the representation question, which was increasingly defined by Americans as an issue of republicanism. The commitment of most Americans to republican values caused the Revolution, for Britain was increasingly seen as corrupt and hostile to republicanism, and a threat to the established liberties that Americans enjoyed.[2] The greatest threat to liberty was increasingly seen as "corruption"--not just in London but at home as well. The colonists associated it with luxury, Royal appointees not answerable to the people, a standing army, unnecessary taxes, and, ultimately, an system of rule by an inherited aristocracy.

The revolution occurred in the hearts and minds of Americans in 1774-1776 as they realized that continued subservience to the British Empire was impossible. Tensions came to a head in Massachusetts. In late 1773 the Boston radicals disguised as Indians dumped a shipment of tea into the harbor in protest. This Boston Tea Party angered the British leadership and next spring Parliament passed the Coercive Acts that imposed near martial law and suspended traditional civil liberties and economic freedom. Congress denounced the Acts, called for boycotts of British goods, and recommended that the militias ready their weapons. Georgia became the 13th colony represented in the Congress.

Canada and 16 smaller British colonies in North America remained loyal. The French Catholics in Canada much preferred the tolerance of London to the anti-Catholic Yankees; they stayed loyal, as did the wealthy sugar planters who controlled the numerous West Indian colonies. East Florida, West Florida and Newfoundland were so small, so new, and so dominated by the British army and navy that they stayed loyal. Nova Scotia (just north of Maine) was the curious case. It had been settled largely by New Englanders, who favored Congress. Yet it was an isolated island, easily controlled by the Royal Navy from its powerful base in Halifax. Protests were put down, and the people stayed neutral, pouring their emotions into religious revival rather than revolution.

The 13 revolting colonies were the largest, richest, and most developed in the Empire. London had no intention of letting them go free. General Thomas Gage fortified Boston and raided nearby towns where rebels had stored munitions. The people of Massachusetts responded by setting up a provisional government, training militia units, and detecting and suppressing Loyalists and spies. A system of "minute men" was established, so that any alarm would be answered immediately.

The Americans had sympathizers in Britain, but not enough. Parliament rejected conciliation by a 3 to 1 margin, and Gage was ordered to aggressively enforce the Coercion laws. More troops arrived, along with the generals who would later replace Gage and command the main British armies during the war, Sir William Howe (fall 1775 to spring 1778), Sir Henry Clinton (1778 to 1782) and John Burgoyne. All of them failed at their mission--perhaps because political considerations in London made it impossible to remove careless generals who repeatedly lost tactical opportunities, quarreled or failed to coordinate with one another, and muffled the strategic designs that London drew up.

Washington took charge of the siege of Boston, June 1775-March 1776, and as Ellis (2005) shows this was the formative event in his development as a military and political leader. The siege revealed the enormous logistical problems the army had to overcome. Washington met the challenge with his trademark determination, leadership ability, and sound decision-making. He also, however, exhibited a stubborn, aloof, severe personality that "virtually precluded intimacy." Washington, dubbed "His Excellency" by the adoring American public, also came to know and evaluate many of his future staff members and lieutenants during the siege. 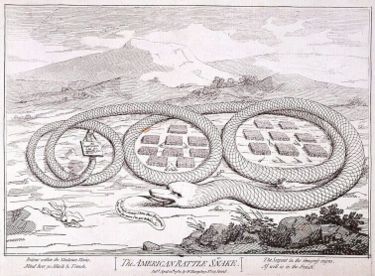 American rattlesnake captures British army at Saratoga, 1777. Published when peace negotiations had begun, this British cartoon warns of the futility of further efforts to defeat the Americans. The rattlesnake boasts: "Two British Armies I have thus Burgoyn'd, And room for more I've got behind." A sign is posted over a vacant third coil:"An Apartment to Lett for Military Gentlemen." Rattlesnakes were found only in the Americas and were often used to symbolize American determination to fight back.[3]

Pybus (2005) estimates that about 20,000 slaves defected to the British, of whom about 8,000 died from disease or wounds or were recaptured by the Patriots, and 12,000 left the country at the end of the war, for freedom in Canada or slavery in the West Indies.

Baller (2006) examines family dynamics and mobilization for the Revolution in central Massachusetts. He reports that warfare and the farming culture were sometimes incompatible. Some militiamen found that farming life failed to prepare them for wartime stresses and the rigors of camp life. Rugged individualism and military regimentation did not always mesh. Birth order shaped military recruitment, regarding older and younger sons. Family responsibilities and a suffocating patriarchy sometimes impeded mobilization. Harvesting duties and family emergencies forced some to have to choose between home and the Patriot cause. Family ties sometimes involved tensions between patriots and their loyalist relatives. The Revolution's impact on patriarchy and inheritance patterns was toward more egalitarianism.

McDonnell, (2006) shows the major complicating factor in Virginia's efforts to raise forces for the war, the conflicting interests of several distinct social classes among whites in the colony more strongly militated against a "unified" commitment to military service. The Assembly had to weigh and balance the competing demands of elite slave-owning planters, slave-holding and non-slave-holding "middling sorts," yeoman farmers, and indentured servants, among others. Its solution involved deferments, taxes, military service substitute, and conscription legislation. Unresolved class conflict, however, rendered these laws ineffective. Violent protests, conscript evasion, and large-scale desertion left Virginia's contributions to the war effort at embarrassingly low levels. As late as the 1781 Battle of Yorktown, Virginia continued to be mired in class divisiveness as its native son, George Washington, made desperate appeals for troops.

Following the war George Washington stood down as Commander in Chief of the Continental army. In late November 1783 the last of the British troops in the new nation left from New York with a fireworks display on Broadway. The hero of the war had retired to Mount Vernon with his wife and did not seek public office initially.

The new nation was near bankrupt. The war was fought on credit; in 1775 $6 million had been printed - by 1783 around $200 million, nearly all set nominally on state taxes. [4] The States did raise money but spent most of it on themselves. Due to a lack of central planning or leadership, the states too also printed money, causing disarray in the money supply. Congress responded by refusing to print more money, then ordered the states to pay the troops themselves and finally devalued the currency - it was declared at one fortieth of its old value. The States were given the task of issuing new currency. Economic activity fell by nearly half of what it was in 1772 by 1790. [5]

By 1786 fears were mounting in the decade-old nation that it wouldn't survive very long. The weaknesses were glaring. James Madison talked of Mortal diseases affecting the confederacy [6]. William Livingston doubted the Republic would last another decade. Continuous political squabbles between the states was threatening to dissolve national unity. The Shays Rebellion in Massachusetts shut down courts in part of the state before it was brought under control, leading to fears that some new rebellion might be too massive for one state to handle.

See the much more detailed guide in the bibliography.