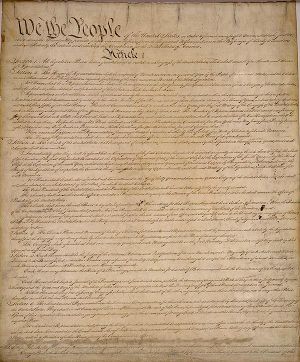 Page 1 of the United States Constitution

The United States Constitution enjoys a central place in United States law, government and politics. The U.S. Constitution has also been closely emulated in other countries on several occasions since its adoption, while exerting significant influence in political and legal thought worldwide. It is the oldest written constitution in operation anywhere in the world.

The Constitutional Convention opened on 25 May 1787 in Philadelphia, Pennsylvania. It was convened under the authority of the Continental Congress, which was then meeting in New York City. The convention was called following an informal conference in Annapolis, Maryland (known as the Annapolis Conference) in 1786. The delegates to the Annapolis Conference, which had been convened to discuss issues of trade and commerce among the states, quickly realized that the problems facing the fledgling nation were not merely confined to trade and commerce, but involved the need for a stronger central government than was provided for by the Articles of Confederation.

The delegates to the Philadelphia convention only expected to discuss the deficiencies in the Articles of Confederation, but several key members, especially James Madison, decided to use the convention to try to fundamentally change the structure of the government.

The document produced at the convention was hand-written on three broadside sheets of parchment paper. The last sheet was signed by 39 of the delegates. Copies of the final draft were sent to the old Congress in New York, which set up a ratification procedure and sent the document to each state.

The delegates to the convention are generally referred to as the "framers of the Constitution."

The Preamble to the Constitution states the reason the document was written and the general goals of the framers:

We the People of the United States, in Order to form a more perfect Union, establish Justice, insure domestic Tranquility, provide for the common defence, promote the general Welfare, and secure the Blessings of Liberty to ourselves and our Posterity, do ordain and establish this Constitution for the United States of America.

Main Article: Article I of the United States Constitution

Members of the House of Representatives, known as Representatives (or colloquially as Congressmen and Congresswomen), are apportioned to each state in accordance to its population. Article 1 requires that a census by taken of the actual population of each state every 10 years. Using euphemism, the Article indicates that slaves be counted separately from free persons, and counted in the population total as three-fifths of their number. People who were not citizens were counted, but not Indians not under local control. Representatives are elected every two years. Representatives must be residents of the state they represent, must have been citizens for at least seven years, and must be at least 25 years old. Each state must have at least one representative, regardless of its population.

Members of the Senate, known as senators, are elected for six-year terms. Senators must be residents of the state they represent, must have been citizens for at least nine years, and must be at least 30 years old. The Senate is divided into three classes, such that every two years, one third of the Senate seats are up for election. Every state, regardless of size, is granted two senators.

Article III lays out the basic structure of the judicial branch of the U.S. government. The judiciary is composed of a Supreme Court and any inferior courts the Congress creates.

Article IV refers to the states, and was designed to correct perceived deficiencies in the Articles of Confederation. For example, Article 4 requires "full faith and credit" be given to the acts, records, and judicial proceedings of each state by every other state. For example, a legal marriage recorded in one state must be fully recognized in all other states.

Article IV also includes the rules for the creation of new states. For example, a state may not created from parts of two other states unless the two states agree to the separation. New states are admitted on a majority vote of the Congress.

Article 5 details how changes to the Constitution, known as amendments, are enacted. The amendment process in the Articles of Confederation was found to be unworkable, requiring unanimous consent of all states to any changes. The Constitution instead requires assent of three quarters of all states.

Additionally, all amendments have to be agreed to by two thirds of both houses of Congress. Amendments may also be proposed by an amendment convention, if two thirds of all states petition for such a convention.

The Constitution currently has 27 amendments, all of which were proposed by Congress. No amendment convention has ever been held.

Article VI also ensures that no religious test should ever be required to hold an office in the United States.

Following the text of Article VII are forty signatures: that of William Jackson, secretary of the convention, and those of 39 delegates, listed below. The final draft was signed on 17 September 1787.

After the final draft was signed, copies were made for the Congress and for each of the thirteen states. The Congress unanimously approved the Constitution on 28 September 1787, and requested that the states debate it and vote to ratify.

The new Constitution, however, had no chance of creating a viable government without the backing of two of the largest of the states, New York and Virginia. To further the cause during the ratification debates, Alexander Hamilton, James Madison, and John Jay published a series of letters to the people of New York using the pseudonym "Publius." These writings were later bundled and republished as the Federalist Papers. The letters explain much of the new Constitution for the layman and touch on historical precedent and political theory. Today, the collected works are considered a masterpiece of political exposition. The actual influence of the Federalist Papers on the votes of the New York ratification convention are debatable, but New York did ratify on 26 July 1788. Virginia, home of many of the Constitution's greatest backers (including Madison and George Washington), ratified on 25 June 1788.

On 2 July 1788, the Congress was informed that the Constitution had been ratified by the required number of states. A few months later, on 13 September 1788, the Confederation Congress voted itself out of existence, scheduling elections for the new Congress which would open in the following March:

On 4 March 1789, newly elected members of the House and Senate gathered in New York City and were sworn in as the First Congress. On 30 April 1789, George Washington was sworn in as the first President of the United States.

The Constitution was quickly amended once it was ratified and the first Congress convened. One of the main arguments against the Constitution during the ratification process was the lack of a bill of rights. One of the main champions of the Constitution, during the Convention and the ratification process, was James Madison. Madison was also elected to the House of Representatives in the first Congress, and he had promised his constituents that he would push through a bill of rights. Madison introduced several amendments in 1789. His list was trimmed and modified in Congress and eventually twelve articles of amendment were sent to the states. Two years later, in 1791, ten of these amendments were ratified. These ten amendments are known collectively as the Bill of Rights.