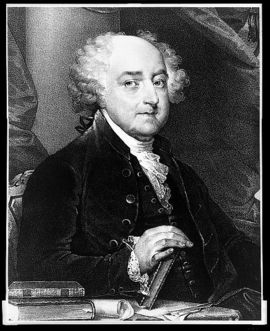 John Adams (1735-1826) was an American Founding Father, diplomat, and the second President of the United States from 1797-1801. Adams was a prominent figure of the American Revolution. His numerous accomplishments include involvement in the drafting of the Declaration of Independence, writing the constitution for the state of Massachusetts, serving as a diplomat to England, France, and The Netherlands, negotiating the Treaty of Paris, and serving as the first Vice President of the United States under President George Washington.

In the presidential election of 1796, Adams, on the ticket of the Federalist Party, defeated the Democratic-Republican nominee Thomas Jefferson and became the second President of the United States. He broke with Alexander Hamilton and the ultra-Federalists, leaving him in a weak position as President. He lost to Jefferson in a bitter rematch in the presidential election of 1800. His presidency was marked by the Quasi-War between the United States and France, the XYZ Affair, the founding of the U.S. Navy, the passage of Alien and Sedition Acts, building a new national army, and an unexpected peace with France; as he left office he appointed numerous judges, most notably John Marshall as Chief Justice.

Adams founded one of the great families in American history, with numerous politicians, diplomats and historians. Adams' reputation was long in the doldrums, since Benjamin Franklin quipped in 1783: "He means well for his Country, and is always an honest Man, often a Wise One, but sometimes and in some things, absolutely out of his senses." Historians much admire his independence, patriotism and realism, but his self-righteousness and vanity represented a critical weakness. 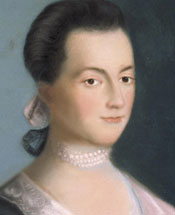 John Adams was born in the small community of Braintree, in the Massachusetts Bay Colony, on October 19, 1735. His father was a farmer, shoemaker, and church deacon, which led to the modest upbringing that would define Adams' life. At a young age Adams developed a love of books and studying, and at the age of 15 he was admitted to Harvard College and graduated in 1755. Deciding to pursue a career in law, he first took a job as a schoolmaster in Worcester to save money for an apprenticeship. He was admitted to the bar in 1759. Upon his father's death in 1761, Adams inherited the family farm; he set up his first law office out of his house. He married Abigail Smith Adams in 1764; they had four children, most notably John Quincy Adams. He was influenced by the revolutionary lawyer James Otis, from whom he adopted some of his revolutionary thoughts, but he focused mainly on local politics until the passage of the Stamp Act of 1765, which he opposed vigorously.[1]

Adams was a vocal critic of the Stamp Act, a tax passed by the British Parliament in 1765, and supported the Sons of Liberty[2], a rebellious organization attacking symbols of British control. He participated in the Massachusetts General Court's response to the Act. Following the Boston Massacre of 1770, in which British troops opened fire on a crowd, Adams defended the accused in court and six of them were acquitted as result.[3]

Adams served a Massachusetts delegate in both the First and the Second Continental Congresses. He signed the Declaration of Independence, as well as helping to draft it. Thomas Jefferson later remarked that Adams was the Declaration of Independence's "pillar of support on the floor of Congress, its ablest advocate and defender."[1] Though Adams in principle opposed the practice of slavery, he remained silent when Jefferson was pressured to strike out a provision in the Declaration that condemned slavery. Indeed, he never took a major role in opposing slavery, unlike most Federalists.[4]

Adams was in Europe as one of the three key American diplomats for the greater part of the war, serving in France and Holland. Adams secured important loans from the Dutch, as well as collaborating with Benjamin Franklin and John Jay to negotiate the Treaty of Paris, ending the war with England. He then served as America's first minister to England.

The role of Vice President was one that Adams didn't settle into easily. His primary job was to serve as President of the Senate, in which his only duty was to cast tie-breaking votes. His relationship with the president was friendly, but Washington rarely asked him for his counsel. All of this was frustrating to Adams, who was a man of action and not shy about letting his opinions be known.[1] Adams once complained to his wife, "My country has in its wisdom contrived for me the most insignificant office that ever the invention of man contrived or his imagination conceived".[5] However, during his term Adams casted 29 tie-breaking votes, a record that still stands today.

The Adams administration was stormy. The French were openly seizing American ships, leading to an undeclared war known as the Quasi-War of 1798-99. Adams sent diplomats to meet with the French Directory, only to be refused an audience and commercial relations were suspended. In 1798, the French demanded American diplomats pay huge bribes in order to see the French Foreign Minister Talleyrand, which the diplomats rejected. The Jeffersonian Republicans, suspicious of Adams, demanded the documentation, which Adams released using X, Y and Z as codes for the names of the French diplomats. A wave of nationalist sentiment overwhelmed the U.S. soon became overwhelming in the United States. Congress approved Adams' plan to organize the navy.[5] Adams also reluctantly signed the Alien and Sedition Act as a wartime measure.

In 1799, however, his friendly response to French peace overture angered hardline Federalists such as Alexander Hamilton, leading to an intraparty battle. Hamilton attacked Adams for his "ungovernable indiscretion" and "distempered jealousy".[1] This, plus the unpopularity of the new taxes and perhaps also the Aliens and Sedition acts, led to Adams' electoral defeat by Jefferson in the 1800 presidential election.

John Adams appointed three justices to the Supreme Court. They are Bushrod Washington, who was George Washington's nephew, Alfred Moore, and Chief Justice John Marshall, who became the dominant figure in American legal history, making the Court a powerful branch of government that could overturn laws passed by Congress.

Adams largely retired from politics after stepping down from the White House. In 1820, however, he served as a delegate to the constitutional convention of Massachusetts. He also spent his retirement 'enjoying his tankard of hard cider each morning before breakfast' and 'rejoicing at the size of his manure pile'.[6]He resided in Quincy, Massachusetts in his later life and saw his son John Quincy Adams elected president in 1824, He died in Quincy on July 4, 1826.