Loyalists were British North America colonists who remained loyal subjects of the British crown during the American Revolution. They were also called Tories, King's Men, or Royalists. Those Loyalists who left and resettled in Canada called themselves the United Empire Loyalists. Their colonial opponents, who supported the Revolution, were called Patriots, Whigs, Rebels, Congress Men, or, in view of their loyalty to the new United States of America, just Americans. Historians have estimated that about 15-20% of the white population may have been Loyalists (that is, about 500,000), but there are no exact numbers. [1]

If I must be enslaved let it be by a King at least, and not by a parcel of upstart lawless Committeemen. If I must be devoured, let me be devoured by the jaws of a lion, and not gnawed to death by rats and vermin."[2]

Seabury remained in America, as did most Loyalists. Indeed, he became the first Episcopal bishop in America. From the Loyalist perspective in 1775, the Loyalists were the honourable ones who stood by the Crown and the British Empire. However once independence was declared in 1776 Loyalists who continued to support the Crown were treated by the Patriots as traitors who turned against their fellow citizens and collaborated with a foreign army.

By July 4, 1776, the patriots controlled virtually all of the territory and population of the 13 states, and demanded that no resident show loyalty to a foreign power. Neutrality was permitted. The British however returned and in September, 1776, they defeated the American army and captured New York City and Long Island, which they occupied until 1783. From time to time they controlled various cities such as Boston (1775–6), Philadelphia (1777), Savannah (1778–83) and Charleston (1780–82), and various slices of countryside. However, 90% of the population lived outside the cities. The result was that the American state governments controlled 80–95% of the population. The British pulled out all their governors and never allowed the Loyalists to set up any government. Great Britain did reestablish its colonial governor in coastal Georgia[3] 1779–82, with the Rebels in control upstate. Elsewhere, the British were normally only in control through Army and Royal Navy activity.

In Canada, American agents were active, especially John Brown, agent of the Boston Committee of Correspondence, along with Canadian-American merchant Thomas Walker and others, during the winter of 1774–5. They won many inhabitants to sympathize with Congress. However others — probably a majority — remained neutral and refused to join the militia which the British had called out to protect against the American invasion in late 1775. Only a minority expressed loyalty to King George: about 1500 militia fought for the King in defence of Montreal. In the region south of Montreal occupied by the Americans, the inhabitants supported the Americans and raised two regiments to join them.[4] In Nova Scotia, with a large Yankee settlement but a powerful British naval base, neutrality prevailed.

Loyalists in the Thirteen States

Historian Robert Middlekauff summarizes scholarly research on who was a Loyalist as follows:

In no colony did loyalists outnumber revolutionaries. The largest numbers were found in the middle colonies: many tenant farmers of New York supported the king, for example, as did many of the Dutch in the colony and in New Jersey. The Germans in Pennsylvania tried to stay out of the Revolution, just as many Quakers did, and when that failed, clung to the familiar connection rather than embrace the new. Highland Scots in the Carolinas, a fair number of Anglican clergy and their parishioners in Connecticut and New York, a few Presbyterians in the southern colonies, and a large number of the Iroquois Indians stayed loyal to the king.[5]

Loyalists tended to be older, more likely merchants and wealthier and better-educated than their Patriot opponents, but there were also many Loyalists of humble means. Many active Anglicans became Loyalists. Some recent emigrants, especially Scots, had a high Loyalist proportion. Loyalists in the South, however, were suppressed by the local Patriots who controlled local and state government. Many people — such as some of the ex-Regulators in North Carolina — refused to join the rebellion as they had earlier protested against corruption by the local authorities who later became rebel leaders. Such pre-Revolutionary War oppression by the local Whigs contributed to the reason that much of backcountry North Carolina tended to loyalism or neutrality.[6]

Historians estimate that about 15–20% of the population of the thirteen states was Loyalist (or roughly 500,000 people among 3 million residents), but the number was constantly declining as thousands of Loyalists fled the country every year of the war, or changed their affiliation to neutral or Patriot.[7] In Georgia and the Carolinas, people changed back and forth. Due to the highly political nature of the war, a large but unknown proportion of the white population remained neutral

Approximately half the colonists of European ancestry tried to avoid involvement in the struggle — some of them deliberate pacifists, others recent emigrants, and many more simple apolitical folk. The patriots received active support from perhaps 40 to 45% of the white populace, and, at most, no more than a bare majority.[8] 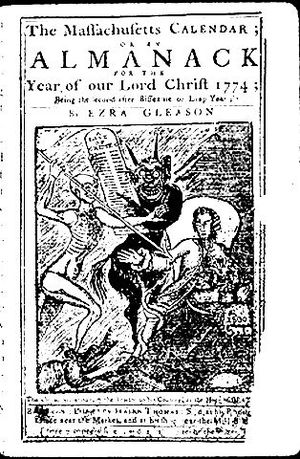 Governor Thomas Hutchinson, the leading Loyalist, was reviled by Patriots; his house was burned and he fled to London, where he wrote a History of Massachusetts

In 1775 Royal Governor Dunmore in Virginia called on slaves of Patriot owners (not Loyalist owners) to flee and join his army. About 300 did so. They fought one battle, wearing the motto "Liberty to Slaves." After the battle about half died of disease in British camps and the "Ethiopian Regiment" was disbanded.[9]

About 5000 blacks served in the Continental army, and slaves who fought in that Army for a set period were often legally emancipated. Thousands more served in militia and state units. Very few free blacks became Loyalists.[10]

As the war ended, Loyalist slaveowners took an estimated 75,000 slaves with them; they were usually taken to the British sugar colonies in the West Indies, like Jamaica, where life expectancy was short. About 400 to 1000 free blacks went to London and joined the community of about 10,000 free blacks there. About 3500 to 4000 went to the British colonies of Nova Scotia and New Brunswick, where the British provided many with land. Over 1,500 settled in Birchtown, Nova Scotia, instantly making it the largest free black community in North America. However about 1,500 were dissatisfied and left Nova Scotia for the new British colony of Sierra Leone in Africa after 1787, where they became part of the ruling elite.[11]

The largest concentration of Loyalists was in New York City and Long Island (controlled by the British Army from September, 1776 until the evacuation in late 1783). Many Loyalist families fled to New York City, where they were under military rule. Britain reestablished a colonial government in parts of Georgia, but nowhere else did it attempt to restore colonial civil government in which Loyalists might participate, governing instead by military rule. In Patriot controlled areas — that is most of the country — Loyalists were subject to confiscation of property. In October 1775, Congress passed a resolution calling for the arrest of all loyalists who are dangerous to "the liberties of America." Outspoken supporters of the King were threatened with public humiliation (such as tarring and feathering) or physical attack. However relatively few Loyalist civilians are thought to have been killed by mobs; two men in Philadelphia were officially executed for supporting the British.

The Loyalists rarely attempted any political organization. They were often passive unless regular British army units were in the area. The British, however, assumed a highly activist Loyalist community was ready to mobilize and planned much of their strategy around raising Loyalist regiments. The British provincial line, consisting of Americans enlisted on a regular army status, enrolled 19,000 American loyalists (50 units and 312 companies). Another 10,000 served in loyalist militia or "associations." The maximum strength of the Loyalist provincial line was 9,700 in December 1780.[12] In all about 50,000 at one time or another were soldiers or militia in British forces, including 15,000 from the main Loyalist stronghold of New York.[13] 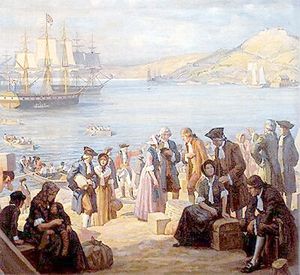 The vast majority of the Loyalists (300,000 to 400,000) remained in America during and after the war. Starting in the mid-1780s a small percentage of those who had left returned to the U.S.

Following the end of the Revolution in 1783, Loyalist (especially soldiers and former officials) could choose evacuation. Loyalists whose roots were not yet deeply embedded in the New World were more likely to leave; older men who had familial bonds and had acquired friends, property, and a degree of social respectability were more likely to remain in America.[14]

About 15–20% of the Loyalists left, an estimated 70,000 Loyalists, or about 3% of the total American population. About 46,000 went to Canada; 7,000 to Great Britain and 17,000 to British colonies in the Caribbean. About 32,000 went to Nova Scotia, where they were not well received, so the colony of New Brunswick was created for them. About 10,000 went to Canada, especially the Eastern Townships of Quebec and modern-day Ontario.[15]

The richest and most prominent Loyalist exiles went to Great Britain to rebuild their careers; many received pensions. Many Southern Loyalists, taking along their slaves, went to the West Indies and the Bahamas.

Thousands of Iroquois and other Native Americans were expelled from New York and other states and resettled in Canada. A group of Black Loyalists settled in Nova Scotia but, facing discrimination there, emigrated again for Sierra Leone.

Many of the Loyalists were forced to abandon substantial amounts of property, and restoration of or compensation for this lost property was a major issue during the negotiation of the Jay Treaty in 1795. The British government paid large sums in claims to the Loyalists.

Return of some exiles

The great majority of Loyalists never left the United States; they stayed on to become citizens of the new country. Some became nationally prominent leaders, including Samuel Seabury and Tench Coxe. Some exiles returned, as the Massachusetts story confirms.[16] Of those who left Massachusetts, virtually all expressed a desire to return to what they considered their native home. After the last wave of anti-Toryism passed in the wake of the peace treaty of 1783, a number of Loyalists, typically young, native born, and still emotionally attached to the area, made their way back to Massachusetts between 1784 and 1789. On reentering Massachusetts, they encountered, for the most part, a warm welcome from anti-Toryists and were able to integrate themselves into society, reclaiming property, collecting debts, and joining the conservative, Federalist political culture of the state.

Count Rumford (Benjamin Thompson) was a loyalist who fled to London when the War began. He became a world class scientist, a founder of thermodynamics and famous also for research in artillery ordnance. His expressed a desire to return to the United States in 1799 and was eagerly sought by the Americans (who needed help in fighting the Quasi-War with France). Rumford eventually decided to stay in London because he was engrossed with establishing the Royal Institution in England. [17]