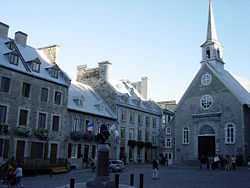 Quebec City is the capital of the province of Quebec, Canada. It is the second-largest city in the province, after Montreal. The city celebrates its 400th anniversary in 2008.

Quebec City was founded by Samuel de Champlain in 1608, who named the settlement Kébec, after an Algonquin word meaning "place where the river narrows." In 1775, Richard Montgomery and Benedict Arnold led American troops in an unsuccessful attempt to capture the city. In the nineteenth century, Governor General Lord Dufferin persuaded the city to not demolish the fortifications of Old Quebec – an early example of heritage conservation.[1]

Quebec's Old Town (Vieux-Québec) is the only remaining walled city in North America, north of Mexico. It was declared a UNESCO World Heritage Site in 1985.[2]

During the winter, the city hosts its famous Carnaval de Québec. The city also has a summer festival, the Festival d’été international de Québec.