From Citizendium
(Redirected from Great Lakes)
Jump to: navigation, search 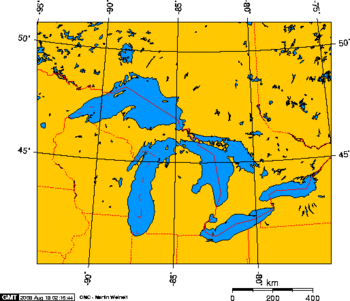 The Great Lakes are a chain of five freshwater lakes located in eastern North America, on the border of Canada and the United States of America. Consisting of Lakes Superior, Michigan, Huron, Erie, and Ontario, they form the largest group of freshwater lakes on Earth. The Saint Lawrence River is the primary outlet of these interconnected lakes, flowing through Quebec to the Atlantic Ocean.

The lakes are bounded by the Canadian province of Ontario and the U.S. states of Minnesota, Wisconsin, Michigan, Illinois, Indiana, Ohio, Pennsylvania, and New York. Four of the five lakes form part of the Canada-United States border; the fifth, Lake Michigan, is contained entirely within the United States.

Lake Champlain, forming the border between northern New York and Vermont, was briefly considered a Great Lake in 1998.

The Great Lakes were formed at the end of the last ice age about 10,000 years ago, when the Laurentide ice sheet receded. When this happened, the glaciers left behind a large amount of meltwater which filled up the basins that the glaciers had carved, thus creating the Great Lakes as we know them today.

The Saint Lawrence Seaway opened the Great Lakes to ocean-going vessels. However the move to wider ocean-going container ships — which do not fit through the locks on these routes — has limited shipping on the lakes.