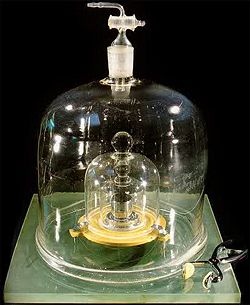 The kilogram (kg) is the International System of Units (SI, metric system) unit of mass.[1]

The standardization of unit of mass started with the 1791 decision of the French National Assembly to adopt a uniform system based entirely on the unit of length, the meter, defined at the time as being equal to one ten-millionth of the length of the quadrant of the Paris meridian. The unit of mass was the mass of a cubic decimeter (10−3 m3) of water at 4 0C, the temperature of maximum density.

In 1889, the first Conférence Générale des Poids et Mesures (CGPM) sanctioned the international prototype of the kilogram, made of platinum-iridium, and declared: This prototype shall henceforth be considered to be the unit of mass. The third CGPM (1901), in a declaration intended to end the ambiguity in popular usage concerning the word weight, confirmed that:[2]

The kilogram is the unit of mass; it is equal to the mass of the international prototype of the kilogram.

History of the kilogram

The use of weights and balances to perform mass measurements have been the cornerstone of trade and commerce as far back as mankind's early civilizations in the Middle East and the Nile valley.

A reliable international standard for mass and length is indispensable, not only in science, but also in trade and commerce. The fact that the base unit of mass is the kilogram, rather than the gram, is due to a historical quirk that led to the name of the base unit including the prefix "kilo". An early version of the metric system, prepared on the instigation of king Louis XVI of France, proposed the "grave",[3] equal to the mass of one cubic decimeter of water at ice point (about one kilogram), as the unit of mass. However, in 1791, two years after the French Revolution, a unit equal to one-thousandth of the "grave" (a gram) was chosen as standard, as most common commercial transactions were for masses less than one "grave" (and perhaps because the revolutionaries wanted to take their distance from the pre-revolution concept). Soon after, it was decided to prepare prototype artifacts of the meter and the gram. However, because the mass of the gram turned out to be too small for a reliable prototype, a prototype of 1000 grams, or one kilogram, was manufactured in 1799 as the mass standard. The prototypes of the meter and the kilogram were deposited in the Archives of the French Republic and form the basis of the present system known as SI.

It was not until 1875, however, that seventeen countries signed the Meter Convention that established the foundations of the International System of Units SI that would provide uniformity in the standards of weights and measures. In 1875, the Meter Convention founded the Comité International des Poids et Mesures (CIPM), which took the responsibility of manufacturing replicas of the meter and kilogram prototypes, and the Bureau International des Poids et Mesures[4] whose function was to serve as the custodian of the prototypes. In 1878, a kilogram cylinder made of 90 % platinum—10 % iridium alloy was polished, adjusted, and compared with the kilogram of the Archives. It was placed in a safe at the BIPM in 1882, and was ratified as the International Prototype Kilogram by the first Conference Generale des Poids et Mesures (CGPM) in 1889. In 1901, the third CGPM in Paris established the definition of the unit of mass, distinguishing weight and mass.

The unit of mass is still only available at the BIPM. Therefore, prototypes serving as national standards of mass must be returned periodically to the BIPM for calibration, either on an individual basis, which can be done anytime, or as part of a simultaneous recalibration of all the prototypes known as periodic verification. The results of the third periodic verification demonstrated a long-term instability of the unit of mass on the order of approximately 30 μg/kg over the last century; this instability is attributed to surface effects that are not yet fully understood.

To date the kilogram remains as the only SI base unit defined by an artifact, the other SI base units are related to physical observations of constants of nature. The standard kilogram is thus constantly in danger of being damaged or destroyed. While comparisons of nearly identical 1 kg mass standards can be performed with a relative precision of 10−10 with commercially available balances and with 10−12 with special balances, it is clear that the limitation in the field of mass metrology lies within the artifact definition itself. Therefore, the ultimate need for mass metrology is to redefine the unit of mass in terms of a fundamental constant of nature.

Current efforts for an alternative definition of the unit of mass

Efforts to replace the artifact kilogram definition with one based on an invariant of nature have been ongoing for years and have been a challenge to the scientific community. A recent discussion can be found in Richard.[5] These efforts are based on two approaches:

The mechanical electrical measurement approach, uses what has become known as a moving-coil watt balance. The main concept is to compare a power measured mechanically in terms of the kilogram, meter, and second to the same power measured electrically using the Josephson effect and quantum Hall effects. This links the kilogram to one of nature’s time invariants, the Planck constant h. One can thus consider defining the kilogram in such a way as to fix the value of h and to use a watt balance to implement the definition and to directly calibrate standards of mass.

The atom counting approach aims at relating the mass of an atom to the kilogram. Within this framework, two paths can be taken:

In one approach currently being pursued, gold ions from an ion beam are deposited on a target. When the total current is measured in terms of the Josephson and quantum Hall effects, and the target is weighed, the result is a value of Avogadro's constant and again the mass of the carbon-12 atom in kilograms.

None of these approaches has been able to rival the present artifact definition yet. However, competing with the present definition requires achieving a minimum level of precision on the order of 1×10−8.