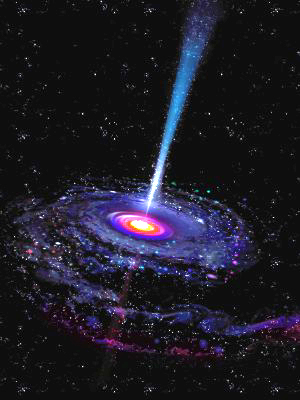 A black hole at the center of a galaxy, NASA image

A black hole is an object in spacetime which has an escape velocity greater than c, the speed of light. Since light cannot escape, the object absorbs all light, hence the term black.

Black holes are thought to be the result of collapsing matter following the explosion of large stars into supernovae. For a star to be capable of compaction into a singularity, it must have a mass greater than 3.4 times that of the Sun. Specifically, if the remnants of a star which has exhausted the energy available from nuclear fusion reactions are greater than about 3.4 times the mass of the sun, electron degeneracy and neutron degeneracy are insufficient to prevent the star from collapsing into a black hole. Recent cosmology has considered the possibility of smaller black holes forming in the very early history of the universe, due to fluctuations in mass distribution when the density of the universe was significantly higher than is observed now.

According to quantum mechanics, the location of the matter within a black hole is uncertain. Additionally, a phenomenon called Hawking radiation predicts that black holes can "leak" a very small amount of mass. So theoretically, black holes are not truly "black" due to emitted radiation. Black holes have a surface temperature defined by their mass. The larger the mass of a black hole, the larger the diameter, and the lower the amount of energy which escapes, thus the lower the temperature, and the longer the time it takes for the black hole to "evaporate".

Detection and Observation of Black Holes

In 2015, the two LIGO (Laser Interferometer Gravitational-Wave Observatory) detectors in the USA made the first-ever detection of gravitational waves, which were emitted by two colliding black holes that were approximately 29 and 36 times as massive as the Sun. Since then, the Virgo detector in Italy has also contributed to gravitational wave detection.

In 2019, a direct image of a black hole was made using the Event Horizon Telescope, which is actually a worldwide network of radio telescopes. This black hole is 6.5 billion times more massive than the Sun and located 55 million light-years away in the galaxy M87.