Sir Isaac Newton (Woolsthorpe 1642 - London 1727) is one of the giants in the history of mathematics, physics and astronomy. He laid the foundations of differential and integral calculus and classical mechanics — often referred to as Newtonian mechanics — as well as celestial mechanics and modern optics. Along the way he invented the reflecting telescope. By 1700 his name became a byword for genius and the use of mathematical and mechanical models to explain the entire universe, and thus he was a central figure in the Enlightenment.

Newton was born on Christmas Day 1642 — one year after Galileo died [1] — in Woolsthorpe, Lincolnshire; his father died before his birth.[2] The Newtons were a well-to-do, upwardly mobile family of farmers, but had never had a prominent member. When Newton was little more than two years old, his mother, Hannah (1610–1679), remarried, and his upbringing was taken over by his maternal grandmother.

Newton began his schooling in neighbouring villages, and at ten was sent to the grammar school at Grantham, the nearest town of any size. He boarded during terms at the house of an apothecary from whom he may have derived his lifelong interest in chemistry. The young Newton seems to have been a quiet, not particularly bookish lad, but very ready with his hands; he made sundials, model windmills, a water clock and a mechanical carriage, and flew kites with lanterns attached to their tails.

In 1656, Newton's mother, on the death of her second husband, returned to Woolsthorpe and took her son out of school with the idea of making him a farmer. He hated farming. Hannah, after considerable persuasion by his teacher at Grantham, who had recognized Newton's intellectual gifts, allowed him to prepare for entrance to Cambridge University. In June 1661 he was admitted to prestigious Trinity College as a lowly subsizar (a student required to do work-study). The main curriculum was the study of Aristotle, but early in 1664, as Newton's notebooks indicate, he began an intensive self-study of geometry, Copernican astronomy and optics. On his own he read Descartes, Pierre Gassendi, Galileo, Robert Boyle, Thomas Hobbes, Kenelm Digby, Joseph Glanville, and Henry More. He was a loner with only one friend, but he was stimulated by the distinguished mathematician and theologian Isaac Barrow, Lucasian Professor of Mathematics, who recognized Newton's genius and did all he could to foster it.

Newton took his bachelor's degree in January 1665 and was selected for a scholarship in 1664 and a fellowship in 1667. Upon taking his MA he became one of Trinity college's sixty fellows, with an income of £60, part of which came in the form of room and board. He had no duties at Trinity over the next 28 years; he did no teaching apart from a few lectures (to nearly empty halls) and tutoring an occasional student. At the urging of Isaac Barrow in 1669 he wrote out some of his findings, which circulated in manuscript. He invented the reflecting telescope, which caused a sensation in London in 1671 and led to his election to the Royal Society. Newton became Lucasian Professor of Mathematics in 1669 at £100 per annum. With this added to his fellowship and family estate, Newton was well off. He spent most of his time with experiments in alchemy and speculations in Arian theology, which had no influence whatever at the time or later. Newton made enemies easily, with an almost paranoid style of disputation. Many scientists in the era were repeatedly charging each other with plagiarism, and sometimes hid their discoveries in code so that in future years they could decode the message and claim priority. In 1704 Newton published his great book on Opticks, which had been mostly written three decades before.

Publication in 1687 of the Principia made Newton one of the best-known intellectual figures in Europe. At the same time Newton became a leader of the university against King James II, who was promoting Catholicism there. When James was overthrown, Newton's political reputation soared. In 1694 he suffered an emotional breakdown and his intellectual productivity ended. In 1696 he left Cambridge for London, where he became Warden of the Royal Mint. The appointment was intended as an honorary sinecure for England's most famous intellectual, but Newton characteristically threw himself into a successful effort to reform the nation's coinage and crack down on counterfeiters. He became Master of the Mint in 1699; in 27 years as Master he averaged an income of about £1650 a year, one of the highest salaries in London. He was president of the Royal Society from 1703 to his death, turning that honorific position into an operational one that upgraded the Society's usefulness. In 1705 he became the first scientist in European history to be knighted.

Newton never married, but he brought his niece to London as his hostess and lived in upper-class style.

The year 1666 is known as Newton's annus mirabilis (miraculous year — more precisely the two years 1665-1666), when he was about 24 years old. He later recalled, "For in those days I was in the prime of my age for invention & minded Mathematicks & Philosophy more than at any time since." (By "philosophy" he meant physics.)

Critical to his work on calculus was discovering the binomial theorem, which expresses areas under curves as infinite series; when the curve is expressed as algebraic formula, he had invented integration. He followed that with a method for differentiation, and came upon the fundamental theorem of the calculus, that of the inverse relation of differentiation and integration. Having invented the calculus, he put aside mathematics for two years and turned to physics.

Although Newton had communicated his discoveries in the calculus privately, he did not publish anything formal about it until finally, in 1704, he published Opticks. In the meantime the German mathematician Gottfried Wilhelm Leibnitz had developed his own, very similar version of the calculus. Although he acknowledged that Newton was earlier, a nasty priority conflict broke out in the 1710s. Newton and his (mainly English) followers accused Leibnitz of plagiarism, and the Germans retaliated in kind. The modern view is that both mathematicians discovered the calculus independently. The symbolism in modern use comes from Leibnitz and 18th-century French mathematicians.

While waiting out the plague, Newton began to investigate the nature of light. White light, according to the prevailing theories, was homogeneous. His first experiments with a prism provided the true explanation of colour. Passing a beam of sunlight through a prism, he observed that the beam spread out into a coloured band of light (spectrum). While others had undoubtedly performed similar experiments, it was Newton who showed that the differences in colour were caused by differing degrees of refrangibility. A ray of violet light, for example, when passed through a refracting medium, was refracted through a greater angle than a ray of red light. His conclusions, checked by ingenious experiments, were that sunlight was a combination of all the colours and that the colours themselves were monochromatic (his term was homogeneal), and separated merely because they were of differing refrangibility. 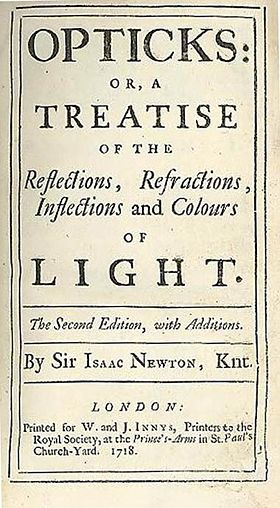 Newton had already made great progress in his devising "method of fluxions" (the infinitesimal calculus). During the plague years he recorded his first thoughts on gravitation, inspired (according to the story he related as an old man[3]) by watching an apple fall. It fell straight down — why was that? He was trying at that time to determine what type of force could hold the moon in its path. The fall of the apple led him to think that it might be the same gravitational force, suitably diminished by distance, that had acted on the apple. Thereby he discovered the law of gravitation (attraction is proportional with inverse distance squared). He verified his conjecture approximately by a numerical calculation. He did not, at the time, pursue the matter, because the problem of calculating the combined attraction of the whole earth on a small body near its surface was obviously one of great difficulty.[4]

Newton struggled with how to conceptualize gravity. He had early rejected Descartes's vortex account of the cause of the motion of the planets. Descartes had argued that forces were transmitted through contact and that this required that matter be continuous and that hence there could be no vacuums. As early as 1665 Newton attempted to find a physical explanation of the cause of gravity but never found a suitable answer. As Newton said later in his Principia, "I have not as yet been able to deduce from phenomena the reason for these properties of gravity, and I do not feign hypotheses. For whatever is not deduced from the phenomena must be called hypothesis; and hypotheses, whether metaphysical or physical, or based on occult qualities, or mechanical, have no place in experimental philosophy". Thus Newton offers no explanation of gravity but shows through his mathematics that it "acts" in accordance to the mathematical laws he offers us in the Principia. This was a difficult approach for his contemporaries to accept. Robert Hooke, in particular, saw experimentation as the heart of science and disapproved of Newton's focus on theory and mathematics.

Later in life, as a holder of the Cambridge Lucasian chair of Mathematics, Newton worked out his initial ideas into a set of mechanical laws, with his second and most important law: Force is mass times acceleration (

). Newton was the first to understand the concept of inertial forces, notably the centrifugal force, although Christian Huyghens was close to understanding this effect. In 1684 Newton proved that Kepler's laws follow from his own second law in conjunction with his gravitational law. This proof completed the astronomical revolution initiated by Copernicus. 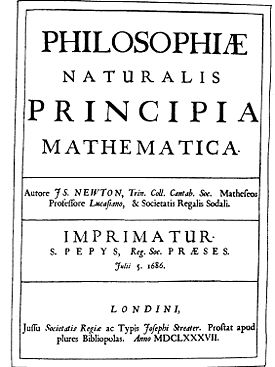 Newton avoided publishing his results, preferring to communicate them to close colleagues. Edmond Halley went to great lengths to convince Newton to write his opus magnum, Philosophiae Naturalis Principia Mathematica ("Mathematical Principles of Natural Philosophy" written in Latin, it was called the Principia), which appeared in 1687. A second, expanded edition appeared in 1713. It was a work on mechanics that used Newton's new principle of universal gravitation to explain falling bodies on the earth and the motions of planets and comets in the heavens. The first part covers dynamics and includes Newton’s three famous laws of motion. The second part concerns fluid motion; the third part deals with "the system of the world" (De mundi systemate) — the unification of terrestrial and celestial mechanics under the principle of gravitation and the explanation of Kepler’s laws of planetary motion. The material was very advanced and difficult, especially since the underlying calculus was deliberately hidden from view. Scientists across Europe immediately recognized its importance and tried to read it.

Feingold (2004) explains that the rapid dissemination of Newton's science came first via the members of the Royal Society, both British and Continental. The scientists, mathematicians, and philosophers of Germany, the Netherlands, France, and Italy read the editions of the Principia and the Opticks and taught the ideas to their students. Newton's work was widely accepted, except in Italy, where the Catholic Church, having silenced Galileo, tried to suppress Newton's ideas as well. Despite the importance of Descartes to the French, Newton carried the day in France. Voltaire in particular made Newton the great hero of the modern world of ideas. Voltaire's Elemens de la philosophie de Neuton (1737) was a success that rendered Newton intelligible and his work accessible to the nonspecialists and amateurs who flourished in the Enlightenment. In Germany Leibnitz praised Newton's Principia, but was uncomfortable with Newton's position regarding gravity, especially with the inherent concept of action at a distance. It was philosophically untenable to merely dismiss the problem of its cause. French scientists, especially Pierre Simon Laplace (1749-1827), developed and systemized Newton's ideas into modern Classical mechanics in the late 18th century.[5]

Newton's work dominated science and educated thought throughout the 18th century, being seen as the highest achievement of pure reason and classical culture.[6] In the 19th century, however, Romantic scientists went in entirely new directions, exploring non-Newtonian topics in electricity, magnetism and thermodynamics, and in mathematics turning to topics unrelated to calculus, like group theory. The leading German Romantic, Wolfgang von Goethe, even tried to challenge Newton's optics.