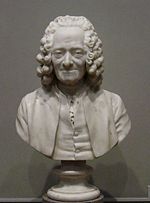 Voltaire was the pen-name of François-Marie Arouet (1694-1778), a French writer and philosopher, who was one of the leading figures of The Enlightenment. His literary output was extensive, ranging from poems and plays, to works of satire such as Candide, to works of history and philosophy, including numerous (anonymous) contributions to the famous Enlightenment accomplishment, the ~72,000 article Encyclopédie, and an extensive correspondence. He can even be credited with one of the prototypical works of science Fiction, Micromégas, written in 1752. A perpetual thorn in the side of the alliance between the French state and the church, he was exiled from France on a number of occasions, during which an exile to England helped him appreciate the contribution of English thinkers to the Enlightenment, generally attributed predominantly to French thinkers.