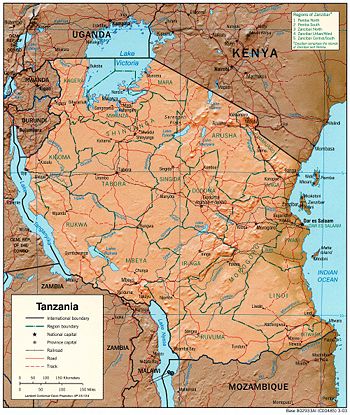 Tanzania is a coastal East African nation. The mainland portion was formerly called Tanganyika, and the main offshore islands Zanzibar and Pemba; the current name is a portmanteau, "Tangayika + Zanzibar". It was previously a British colony, and achieved its independence in 1961 (Tanganyika) and 1963 (Zanzibar), as a result of a movement spearheaded by young intellectuals, including Julius Nyrere, later Tanzania's first president. The two former colonies united in 1964.

Tanzania is a republic. Its current president (head of state and of government) is Jakaya Kikwete; Zanzibar has a local president for internal affairs, currently Amani Abeid Karume. The official language is Swahili, but English is also widely used, in government and education as well as elsewhere, and there are many other local languages. Tanzania's capital is moving to Dodoma, which will replace Dar es Salaam, which remains the country's largest city.

Tanzania is rich in natural resources. Its national parks are internationally famous, especially Serengeti, the setting of Serengeti Shall Not Die. Also well known are the Ngorongoro Crater, Lake Tanganyika and Mount Kilimanjaro, the tallest peak in Africa at 5,895 meters.

Control of Tanzania was an item of contention during the First World War.

The religion of the people of the mainland portion of the country is roughly evenly divided among Muslims, Christians, and followers of traditional beliefs; but the people of Zanzibar are almost all Muslim.