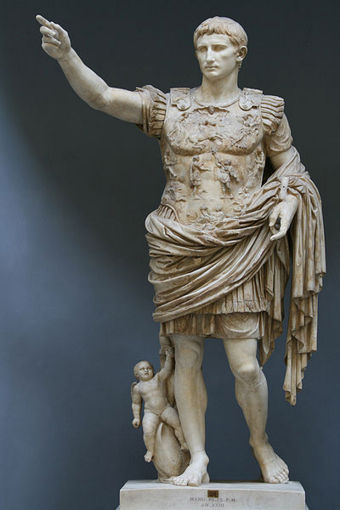 It is likely that Roman emperor Augustus Caesar (pictured) commissioned poet Virgil to write The Aeneid.

Virgil or sometimes Vergil, and formally as Publius Vergilius Maro was arguably the greatest Roman poet and author of Aeneid, an epic written in dactylic hexameter which has become an important work in Western civilization. Virgil lived from 70BCE to 19BCE in the classical age but died of a fever at age 51. The Aeneid has had profound influence on the literature of Western culture during the approximately 2000 years since it's been written, and figured prominently in Dante's Divine Comedy. Biographical information about Virgil remains sketchy and inconclusive, with some of the inferences about his life coming from reading his works, and there is considerable skepticism that particular facts about Virgil may not be accurate.[1]

Virgil was born on October 15th, 70 BCE near the city of Mantua.[2] He almost certainly was the son of a prosperous farmer, and grew to have a love of the countryside which was reflected in much of his poetry.[2] However, there is one account from Macrobius that Virgil came from a humble farming family with meager wealth; but scholars generally believe that Virgil's family was an equestrian landowning family which was prosperous since this much better explains Virgil's expensive education. No doubt that Virgil was highly educated; he attended school in Cremona and Milan, and studied mathematics and medicine and rhetoric in Rome, then later completed his studies in Naples. One account suggested he also studied astronomy and philosophy. Since Virgil wrote highly about writers described as neoteric, including Pollio and Cinna, it has been inferred that he was, for a time, associated with the inner circle ofCatullus.

He loved poetry; he was identified as a member of a group of poets known as Alexandrians who respected the poetry of third-century Greek poets by the same name. He was a contemporary of the Roman poet Horace. Virgil's property was reportedly confiscated after the battle of Philippi in 42 BCE, but there are sources which indicate the property was restored by an order of emperor Octavian (later named Augustus), while other sources indicate that Virgil's father was the "loser" after the re-allocation of property.[2] Still, Virgil's economic position was such that he didn't have to struggle to survive, and led a life which allowed him to write poetry, and he owned several houses, and spent much of his time in Campania and Sicily despite also having a house in Rome. During his lifetime, Virgil saw the last vestiges of the Roman Republic crumble and fall apart. Virgil wrote poems known as the Ecologues and the Georgics which dealt with agriculture, farming, and the rustic life, from the years 42 BCE to 37 BCE.

Roman emperor Augustus Caesar, through an intermediary named Maecenas who identified excellent artists and poets and was a prominent patron of the arts, most likely commissioned Virgil to write a Roman epic to describe the greatness of Rome. Virgil fulfilled this task as a kind of duty, but there were some reports that he was not enthusiastic about this task, and did it as if it was a "religious and political duty".[3] It was an ambitious task; the idea was to show the glory of Rome. Virgil, by writing the epic after most of the founding events of Rome, constructed a myth after-the-fact, to try to explain such events as the Roman character which showed an orientation towards duty and a tendency to fight wars, a character different from that of the ancient Greeks, and to explain why Rome fought such powers as Carthage. At the same time, Virgil sought to expand on the famous well-respected and widely-known epics such as the Iliad and the Odyssey, written by Homer. Accordingly, Virgil picked a minor character from the Iliad and made him into a major character -- namely Aeneas. In the Iliad, there was a brief mention about a character named Aeneas who would survive the collapse of Troy and build a city, but this is all that the Iliad said, according to scholar Elizabeth Vandiver. But Virgil expanded the Aeneas character a hundred fold, and turned him into a mighty warrior and seafaring explorer, like Odysseus or Ulysses, but who fled the wreckage of Troy after the Trojan War, fell in love with Carthaginian princess Dido, and then left her to continue with his quest to found the great city of Rome. Aeneas' departure caused Dido horrific grief leading to her suicide, and the result of this tragic breakup of the two lovers "explains" the subsequent Punic Wars which happened in the period of several hundred years before Rome conquered the entire area around the Mediterranean Sea. Virgil, by writing after most of Roman history had happened, could, in a sense, write a back-dated myth which supposedly happened before Rome was founded around 500 BCE, by describing the adventures of a hero named Aeneas around 1200 BCE. In essence, Virgil could fit the facts in his epic to explain history.

Virgil wrote the Aeneid from 30 BCE to 19 BCE, but died from a fever contracted during a visit to Greece before it was finished. He died on September 21, 19 BCE at the age of 50.[2] According to several accounts, Virgil requested before his death that the manuscript be burned, but Augustus ordered that the manuscript be preserved. Scholars such as Elizabeth Vandiver and others have suggested there were places in the Aeneid where the dactylic hexameter rhyme scheme was incomplete, and other inconsistencies, which scholars believe that Virgil would have fixed had he lived. Critics differ about which sections or lines are incomplete or "metrically unfinished." But the preserved masterwork quickly became a prominent work throughout the Roman empire, read by school children and adults, translated into numerous languages. Virgil was buried in a tomb two miles north of Naples although there are doubts about whether this is, in fact, where he was buried.

The Aeneid is widely considered Virgil's finest work and one of the most important poems in the history of western literature. The twelve books are written in dactylic hexameter which sounds pleasant in Latin, and uses the same metrical style as Homer. The Aeneid's first six books describe the journey of Aeneas from Troy to Rome. Virgil used several additional models besides Homer, including the Latin poet Ennius and the Hellenistic poet Apollonius of Rhodes. Although the Aeneid casts itself firmly as an epic, Virgil expanded the genre by including tragedy and aetiological poetry. Ancient commentators noted that Virgil seems to divide the Aeneid into two sections based on the poetry of Homer; the first six books were viewed as employing the Odyssey as a model while the last six were connected to the Iliad. Scholar Elizabeth Vandiver points out various reversals in her course on the Aeneid for The Teaching Company; for example, when in the Iliad the Trojans almost burn the Greek ships, in the Aeneid it is the Rotulians who almost burn the Trojan ships. Even the order is reversed: in the Homeric stories, the battling in the Iliad comes first, followed by the seagoing adventures of Odysseus; but in the Aeneid, the sea voyages precede the battling. 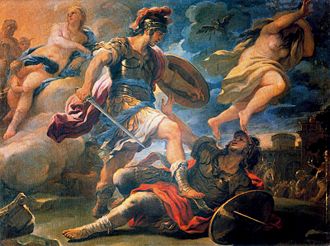 Some critics suggest the character of Aeneas changes from cool controlled devotion to duty, to emotional loss of control in which he kills archrival Turnus despite pleas for mercy.

The Aeneid was well received critically throughout history, although the tone of the poem has been subject to debate.[4] While some critics suggest the tone is pessimistic and politically subversive to the Augustan regime, most scholars see it as a celebration of the new imperial dynasty. Some scholars see strong associations between Aeneas and Augustus in the sense that the one is the founder of Rome, and the other is the "co-founder" of Rome. A strong drive towards a climax characterizes the poem which is full of prophecies about Rome's future. As protagonist, Aeneas seems to waver emotionally between a monstrous anger, and between a controlled commitment to duty. Critics note the breakdown of Aeneas' emotional control in the last sections of the poem where the pious and "righteous" Aeneas mercilessly slaughters his archrival Turnus.

Sometime after publishing the Eclogues, but probably before 37 BCE, Virgil became part of the circle of Roman arts patron Maecenas, Octavian's capable agent d'affaires who sought to counter sympathy for Antony among the leading families by rallying Roman literary figures to Octavian's side. Virgil seems to have made connections with many leading literary figures including Horace, in whose poetry he is often mentioned,[5] and Varius Rufus, who later helped finish the Aeneid. At Maecenas' urging, Virgil spent almost the next decade from 37–29 BCE on the longer didactic hexameter poem called the Georgics. The term is from the Greek meaning "On Working the Earth". Virgil dedicated this work to Maecenas which teaches about how to run a farm, with specifics regarding crops and trees, livestock and horses, and beekeeping. Virgil uses the instructive didactic tradition of the Greek poet Hesiod. Significant passages include the beloved Laus Italiae of Book 2, the prologue description of the temple in Book 3, and the description of the plague at the end of Book 3. Book 4 concludes with a long mythological narrative, in the form of an epyllion which describes vividly the discovery of beekeeping by Aristaeus and the story of Orpheus' journey to the underworld. Ancient scholars conjectured that the Aristaeus episode replaced a long section in praise of Virgil's friend, the poet Gallus, who was disgraced by Augustus and committed suicide in 26 BCE. Augustus is supposed to have ordered the section to be replaced. A major critical issue in considering the Georgics is the assessment of tone; Virgil seems to waver between optimism and pessimism, sparking a great deal of debate on the poem's intentions.[6]