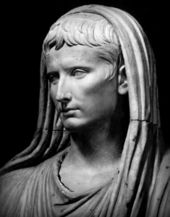 Augustus capite velato
© AERIA (Used by permission)
Augustus (* September 23, 63 BC[1] in Rome[2] as Gaius Octavius; † August 19, AD 14 in Nola near Naples) was the first and one of the most important Roman emperors.

The grandnephew, adopted son and heir to Gaius Iulius Caesar won the struggles for power that followed Caesar's murder in 44 BC. From 31 BC Augustus alone ruled the Roman empire after ending a century of civil war. Under the obscuring slogan restitutio rei publicae ("reinstatement of the Republic") he in fact conducted the institution of autocratic monarchy in the form of the Roman principate, which he anchored in the imperial Julio-Claudian dynasty for generations to come. Nevertheless he gave Rome an era of inner peace and sustainable prosperity, which was glorified as the Pax Augusta that spawned political and religious reverberations until modern times, e.g. in Catholic state concepts and 20th century politics of tyrants like Benito Mussolini.

Names and titles of the first Caesar Augustus 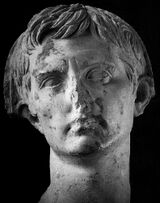 Divi filius after Actium[3]
© AERIA (Used by permission)
The birth name of the later Augustus was Gaius Octavius. According to Suetonius he bore the highly questionable cognomen Thurinus.[4] Cassius Dio is the only classical author to mention Octavius' obscure and rather unfamiliar cognomen Kaipias.[5] After the testamentary adoption by Caesar, Octavius officially accepted the new name Gaius Iulius Caesar,[6] whereas the customary supplemental name indicating an adoption, which would in this case have been Octavianus, was never carried by Caesar's adoptive son.[7] Nevertheless modern scholarly publications mostly use the historically incorrect name Octavian for the time of his rise to political power in order to differentiate between the older and the younger Gaius Iulius Caesar. Almost all ancient historians simply called him "Caesar", "the young Caesar"[8] or seldomly "the great Caesar".[9] At the latest since the official apotheosis of Iulius Caesar in 42 BC his new name is given as Gaius Iulius Divi filius Caesar.[10] After the adoption of the praenomen Imperator (possibly 38 BC, at the latest 31 BC) he used Caesar instead of the gentilician name Iulius. The beginning of his autocracy is therefore connected to the name Imperator Caesar Divi filius.[11]

On January 16, 27 BC the Roman Senate conferred the honorary name Augustus on the new ruler. The institution of the new principate was accompanied by the princeps' new and final lifetime name Imperator Caesar Divi filius Augustus.[12] Together with the name Caesar the name Augustus became an integral part of the Roman imperial titulature, beginning with the reign of his successor Tiberius.[13] At the time of his death his complete name including all titles was: Imperator Caesar Divi filius Augustus, Pontifex Maximus, Consul XIII, Imperator XXI, Tribuniciae potestatis XXXVII, Pater patriae, translated: "Imperator Caesar Divi filius[14] Augustus, Chief Highpriest, 13 times Consul, 21 times Commander,[15] 37 times holder of the Tribunate, Father of the Fatherland". After his consecration in AD 14 his official name was changed to Divus Augustus Divi filius, which remained his god name until late Antiquity.[16]