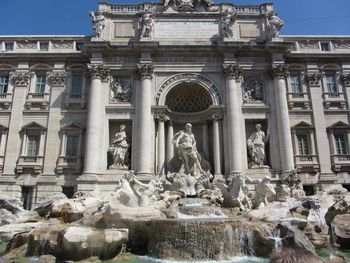 Rome (Italian and Latin: Roma) is the capital city of Italy, of the Lazio region, and of the Province of Rome within it. Located near the central portion of the western coast of the Italian peninsula, where the rivers Aniene and Tiber join, Rome is the largest and most populous comune of Italy, with about 2.7 million residents within city borders as of December 2006.[1] The current Mayor of Rome is Walter Veltroni.[2]

According to legend, Rome was founded on 21 April 753 BC by the twins Romulus and Remus. Rome was once the capital of the Roman Kingdom, the Roman Republic and the Roman Empire, the most powerful, largest and longest-lasting empire of classical Western civilisation. Despite the decadence due to the loss of its status of imperial capital in 330 to Constantinople and the fall of the Western Roman Empire in 476, Rome became important as the centre of the Roman Catholic Church, being the seat of Popes and capital of Papal States until it was conquered and made capital of the newly unified Kingdom of Italy in 1870. It witnessed the rise of Italian fascism in 1922 and finally became the capital of the current Italian Republic in 1946. The Vatican City remains as a sovereign enclave within city territory.

Rome, whose centre is a UNESCO world heritage site[3] hosting some of the world's best known works of art and monuments, is also called "la Città Eterna" (the Eternal City), "l'Urbe"[4] (Latin for "the City" as an antonomasia) and "la città dei sette colli" ("the city of the seven hills").